Dashboard Saint: The radical worshippers from the States

One of the most radical worship albums ever to emerge from the USA is the debut by DASHBOARD SAINT. Mike Rimmer reports. 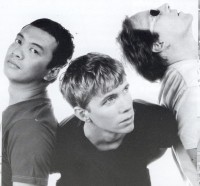 In the beginning, Dashboard Saint's Carlo White worked for Vineyard Music and amongst other things produced some children's albums. She also recorded a couple of projects for Maranatha Music, 'Come As You Are' and 'This Body'. At a time when the vast proportion of worship albums emanating from America were so sugary your teeth would rot just listening to them, these albums came as welcome relief.

The Dashboard Saint album 'Higher' is a direct descendant from these projects but with one important added element. It's even more adventurous! Carla explains, "We basically just did what we liked. Period. No thoughts of will this sell in the Midwest' or any of that. Since we weren't making the album for a label, we had this incredible freedom to just go for what moved us. We were responsible only to ourselves. It was a great experience in that way. After we found the best songs we could, ones that expressed our 'collective' heart, we just went for it. Experimented a lot and invited many of the songwriters to participate in the creative process."

Carla, husband Tim and a collection of friends, worked on 'Higher' over a period of time. I can remember spending time with the couple when they visited Belfast to produce SCSI's debut release and they played me rough mixes of the work in progress. I couldn't wait to get a finished copy and when I did, I wasn't disappointed.

Carla remembers, "We had recorded 'This Body' for Maranatha! Music and had so much fun that we wanted to continue working with some of the same people. We had become pretty close to Eli Thomson and kept talking about wanting to do something together. The Dashboard recording sorta evolved and then after it was over, some of the folks involved decided they wanted to keep playing together."

Having a husband and wife team at the heart of the project creates some interesting creative and personal tensions. I ask Carla to describe their relationship and how they worked as a trio with Eli Thompson. "Sweet and 'sour? Bittersweet? Great, yet incredibly hard more often (than I'd like to admit. We had to work through a lot of trying circumstances; attitudes and at times I think we all felt like giving up at different steps along the way. Seriously. We went into the whole process like, 'Wheeeee, "let's make a worship record together!' We didn't plan much at first and it was kind of a free-for-all, blind-leap and I think we can all say we learned A LOT! Three strong-willed producers without a plan can make for some interesting sessions! Plus, throw in to that mix a husband and wife (a wife who's used to being the ONLY producer) and, look out! Lots of interesting dynamics to say the least."

Pick up the CD in a record store and it might be difficult to decide what's going on. The artwork is deliberate cheesy in an ironic fashion and the name of the band seems slightly irreverent and possibly insulting to Catholics. "Well, first off we liked the name," counters Carla. "And I particularly like the way it causes one to ask, 'What does it mean?' We have such a great cloud of witnesses who have gone before us and such a rich history in the Church. Often, these 'saints' get idolized as some good luck charm, or forgotten completely, (but) when you read about their lives or testimonies, it is so wonderfully encouraging! So I guess our heart was just to have a name that we liked the sound of, coupled with an encouragement to 'saints' everywhere."

One of the interesting factors on 'Higher' is the variety of vocalists employed on the project and the diversity of songwriting. There's Sharon McFeeters from SCSI complete with choir for "Be The One". And then Skypark's Tyrone Wells who Carla describes as a "wonderful guy." She explains, "He has an innocence about him and such a sweet spirit. Plus he's just an amazing singer. He loves to be pushed and challenged by the producer and can really deliver. I thoroughly enjoyed working with him and plan to do much more with him in the future." Tyrone contributed vocals to the amazing title cut which is also given a radical remix on the album. Joining him on that track is Kirsten Owen. "What a set of pipes. I really think she is one of the most amazing singers that I have ever worked with. She can go from a barely audible whisper to belting it out from who knows where." Fans of Violet Burning will recognise Jaime Eichler as the band's original female singer who has been a regular contributor to Carlo's projects. "She has such a unique voice and an ability to evoke emotion." This is most evident on the beautiful closing altar call song, "I Confess" which Jaime delivers with heartbreaking sensitivity.

Dashboard Saint have created a stunning album whilst also managing to flaunt many of the "rules" of making worship albums! Perhaps that's what makes it such a refreshing album Rule number 56b in recording worship albums is, "Never record a song written by the producer's son when he was six years old!" Yet "He Rose Up From The Dead" really works! Carla explains, "Our son Dylan wrote the words to this song when he was six years old. We were recording another worship album and Tim and I had been working on lots of songs and he said, 'I want to write a song,' so he came up with this one. I think it was right around Easter time. I love the way he says, 'Smoke, breath, going up to Heaven' I asked him what does smoke mean? He said, 'It's power. Just like Batman. When someone goes up, there's smoke because it takes a lot of power.' And the breath he said was God's breath that gave Jesus the power to rise. Pretty deep for a six year old. Tim wrote the music and played the guitar and Dylan programmed an old Chroma Polaris keyboard and played all the keys himself. I sang backgrounds, so it's really a White family production!"

'To create a great album, of great songs, recorded with passion and creativity" is how Carla describes their intentions when recording the album. They succeeded! Now that some of the contributors are staying together to work as a band, what of the future? Carla is suitably enigmatic, "We'll have to wait and see!" She teases and then adds, "Actually Tim is working on the follow up project as we speak."

One of my favorite worship albums of all time. Came across it by chance (or Gods providence) and it surprised me with its awesome uniqueness. My new favorite song in the world is "Jesus,Savior of the world." I'll lay there in bed with the lights out and crank that song, the beautiful voices and words and simplicity are so wonderful praise God. Looking forward to a follow up and now trying to locate some cds with Carla and Kristen doin some lead vocals.