After a break of nearly 10 years, Iona co-founders DAVE BAINBRIDGE and DAVID FITZGERALD have been back in the studio. Lins Honeyman reports. 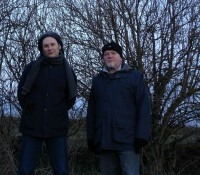 As founder members of Celtic fusion band Iona, woodwinds virtuoso David Fitzgerald and guitarist, keyboard player and general all rounder Dave Bainbridge need little introduction. Having been at the cutting edge of Celtic music for nearly 20 years, the pair's desire to experiment musically and reflect God's work in their lives has led to collaborations with the likes of Adrian Snell, Troy Donockley and, through Iona, the All Souls Orchestra as well as having a host of solo albums under their collective belts.

Picking up where they left off in 1998's 'The Eye Of The Eagle', this year sees a new collaboration in the shape of Lindisfarne-based artist and writer Mary Fleeson. In a musical interpretation of her book Life Journey: A Call To Christ-Centred Living, the duo have set about to reflect and build upon Mary's artwork and writings - the roots of which are firmly planted in the rich spiritual heritage of her home island. The result is a stunning blend of different art forms - not to mention a long awaited new album from the Iona co-founders.

I caught up with Dave and David in a break from their busy schedules to find out more.

Lins: So how did the 'Life Journey' project come about?

David Fitzgerald: My first encounter with Mary Fleeson's book Life Journey was during a lovely moment in Mary's and her husband Mark's kitchen. We were sharing coffee and conversation when Mary passed me a copy of the book. As I turned the pages, prayers, poems, verses and images leapt out and I felt my spirit rise within me. I knew that God was doing something very special and I turned to Mary and said "this could be an amazing source of inspiration for a musical project".

Dave Bainbridge: David then approached me with the idea of us collaborating together on the project. I read the book and was amazed by Mary's stunning artwork. I could immediately see the potential for a musical interpretation and thought it would be a great project for David and I to renew our working relationship after almost 10 years.

Lins: Once the seed had been planted, what happened next?

David Fitzgerald: Once Dave and I had read through the book, we arranged to meet for a few days to explore the themes and images. We decided that we should initially work chapter by chapter and move through the book as if on a journey. It had been a long time since Dave and I had recorded together but it really felt like old times. We prayed to God to unite us in purpose and creativity and, after exploring the first chapter, we started to play together and allowed God to speak through us by the Holy Spirit.

Dave Bainbridge: Then we discussed which instrument of David's might be the most appropriate main voice for each piece and then we started improvising, recording everything we came up with. We did this over two three-day sessions and amassed a huge amount of material which we both felt was really inspired. We constantly referred back to the book to make sure that we weren't going off at a tangent and to check that what we'd recorded was in harmony with Mary's words and illustrations. After that, I spent a long time going through all the material we had recorded and gradually shaped the improvisations into coherent compositions. Then David and I had a third session together in March of this year to record some additional sax, flute and whistle parts, prior to me finishing off the mixing.

Lins: It sounds as though you're pleased to be working together again - this time as a duo.

Dave Bainbridge: David has a great ear and is able to follow where the harmonies lead. The more musicians you have, the less space there can be - especially in a setting where everyone is improvising. As a duo, we can go wherever we want to musically. 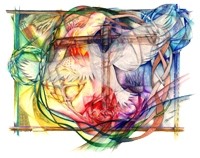 David Fitzgerald: I just thank God that there is this chemistry, a profound understanding, a second sense, that unites us when we play together. We know this to be the work of the Holy Spirit. Working with Dave across the years has been one of the most significant experiences of my musical journey - it's certainly a unique alliance, God ordained.

Lins: You've mentioned before that recording 'Life Journey' was like returning to the source of the inspiration of Iona's early work.

Dave Bainbridge: Well, the very first Iona concert was just David and I playing together and, at that stage, it wasn't too complicated. We often found ourselves improvising together - me on keyboards and David on his assorted instruments. After Joanne (Hogg, lead singer of Iona) joined us a month or so later, the focus and identity of Iona changed as we went from instrumentals to pieces that included vocals and great songwriting from Joanne. Although this has been wonderful, maybe something of the spontaneity and freshness of those early improvisations got lost. It's nice to know that the spark of creativity between David and I is still there and just spending time improvising together again felt very much like it did back in those early days.