When Cross Rhythms first reported on the dissolution of the David Crowder Band (note: CR have never used the *) many readers wondered what was next for the Waco, Texas-based pioneer of radical modern worship and his cohorts. It's now becoming clear. While one-time Band members Jack Parker, Mike Dodson, Jeremy "B-Wack" Bush and Mark Waldrop have formed The Digital Age and have started to release recordings made at their studio in Waco, David Crowder has relocated to Atlanta. Following the release of a stripped down 'iTunes Session LP' in November 2012, Crowder is now touring American clubs with a new collective of musicians referred to as Crowder. With David and his fellow musicians planning to release two albums this year, journalist Allison J Althoff caught up with Crowder in Chicago to ask him about his activities and plans.

Said David, "We're about halfway through our tour with 26 dates left, playing mostly small rock clubs, with a very intimate set. There's a lot of storytelling in the evening, so it just kind of feels like you're just hanging out in a living room. That's what we're going for. We'll also have a five-song EP come out in August, and a full length record in November of this year. Most of the songs on the EP are already recorded, and the record is off and running as well. The band is all new folks. Some of them I've known over the years but others I hadn't met until we started making music together about a year ago. It's been fun to discover new people's musicianship, but to also discover these new people relationally-it's been a treat having these folks on this tour.

"The arrow has left the string so to speak-too late, no takebacks. It's a different setup as far as instrumentation goes. We've got all traditional acoustic instruments with banjo, mandolin, fiddle, upright bass, porch music type stuff. We're revisiting a lot of the old Crowder Band favourites with this instrumentation, and it's fun to see the songs come back to life in a way that's getting rediscovered-it feels like I'm getting to encounter them again for the first time. 'If it can't be on a front porch, it can't be on our stage' is our motto at this point. It generally looks like the Appalachian mountains exploded. There's stuff everywhere, and people fighting over which instrument they get to play next. The set looks like you just walked into the Cracker Barrel is the best way I can describe it."

In what way is Crowder's songwriting developing? "It feels like what I'm discovering as a writer is very roots-oriented. I'm reaching back to traditional instrumentation, and my lyrics seem to be more in line with old gospel type vocabulary as well. Old-time gospel was intentionally made for group singing, and that's exactly what I'm doing. I want to write music for the Church to be able to sing and express themselves to God through music, with a vocabulary that has a wider breadth than just the language of Christian culture. A lot of the words the Church uses are confusing to people outside of the Church, and yet this old gospel stuff almost has a kitchy Americana feel that a lot of people can relate to. You don't have to be educated in the language of church culture to grasp what's being said about the depravity of man, and the distance between us and God, and the reconciliation of that. Those are pretty much what the themes have been so far, which I guess is kind of typical to this kind of music. 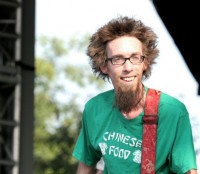 "My music is definitely still music for the Church to sing in a corporate setting, that's for sure. That's how I'm put together, and what I get excited about doing-helping the Church announce things to God. Like at this year's Passion Conference. It was just nuts. I've never been in a setting like that [at the Georgia Dome with 60,000 college students]. As bizarre as it sounds, it felt very intimate. It felt like sacred heart singing, when everyone's facing each other. Being on a stage in the round, you're looking across the arena at all these other folks instead of peoples' backs. So that was pretty inspiring."