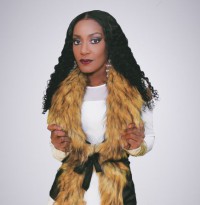 Ever since Cross Rhythms received a copy of the 2015 album 'Prodigal She' by Indiana's Deborah Denise we have recognised that here was a very special talent. Not only was she an exceptional R&B singer who could bring soul power and interpretive sensibility to a wide range of songs but she could also write such songs and produce them in her own home studio. This exceptional blend of skills has meant that Deborah has delivered eight Cross Rhythms radio hits and despite the US gospel companies' almost scandalous disregard of her talents her albums like 2016's 'Psalms Of Deborah' and 2018's 'Deborah 3.0' show that, if anything, her songwriting and production are still improving. A couple of months back Deborah made a surprise visit to Britain and played a number of UK concerts showing what a powerful minister she is, giving testimony to a miraculous healing from life-threatening Graves disease. During her short visit Denise found time to call into the Cross Rhythms studio to talk about her ongoing music ministry.

Tony: What are your favourite songs on 'Deborah 3.0'?

Deborah: "Jesus Please" is one of them. That's the time I was praying - you know how you pray and pray and pray without ceasing. And sometimes he doesn't answer immediately, so I was praying really hard for something at that point. It was like a cry out of my spirit, "Please, Jesus, answer me." "Why Can't U", "On A Daily", that was written off of Romans 7, and how as a Christian we can struggle with the flesh. "Calvary", I love that one. It's like Jesus is talking to us about when he died on the cross for us, so when you hear the lyric, that's him talking to us. "Streets Of Gold" I love a lot.

Tony: That album came out last year. Are there plans for another one?

Deborah: I'm actually producing new music for my new project. I'm singing some while I'm in the UK for the first time that haven't even been released yet. But I'm doing it here now because when the people heard it, they were very receptive to some of the stuff that's on the new project. I don't have a title for the album, but I do have some very great songs that God has done so far. He only gets better and better. Every time he produces something, he always amazes me afterwards.

Tony: How did your UK concerts go?

Deborah: They turned out powerful. I was amazed how God moved on them. And people from children of four years old all the way up to people maybe in their late 60s, 70s, all nationalities, it was amazing to see what God did through me. I knew it wasn't me at all. I get a similar response in the USA, but not like it is here in the UK. I hate to say it, but in America the Christianity is not the same as it is here. The UK seems to have more of a relationship with God, a hunger for God and righteousness, but in the States it's more about prosperity, more like God is the genie in a bottle, than a relationship. They're in it for what he can do for them, rather than what they can do for him.

Tony: Do you have misgivings about the way in which the gospel music industry is organised in the States?

Deborah: It's very hard to even enter, they block a lot of Christians out if you're not in a certain group, or they separate it by genre. You know, "you're [black] gospel, you're [white] Christian music, you're rap". They don't see it as a whole, they're, like, segregating us.

Tony: As you know, Cross Rhythms have, since the very beginning, been supportive of your music. We're currently playing "Why Can't U". What can you tell me about that song?

Deborah: That song was one God wrote through me. That's actually God talking to us. He's talking to Christians and also unbelievers. He said, 'After everything I've done for you, the way I love you, the way I protect you, the way I provide for you, all that I've done, I've died for you, why can't you love me?' And remember, loving God is obeying him. That not an emotional feelings, it's actions of obedience. The verse in the Bible says, 'Jesus stood on the mountain and he looked down on Jerusalem and said "I want to gather you in my arms, but you won't come to me". And that's what that whole song is about.

Tony: What about your radio hit "Fight" ?

Deborah: That song was written about my walk. If anybody knew my story, I had multiple incurable diseases and God delivered me from all of them. All the things Satan brought against me, I fight and I continually fight, because I have God behind me, and greater is he that's in me than he that's in the world. And in order to get to where I am today, I've had to fight Satan's entire kingdom through the power of God to remain standing in the end after all of his attacks. I was just encouraging Christians to fight. Don't give up, don't turn around, don't look back because your hands are on the plough. Move forward and fight.

Tony: Tell me about the songs from your forthcoming album which you performed in the UK.

Deborah: One of them is called "Redeemed" and it's about "let the redeemed of the Lord say so" - 'cause God delivered them out of the hands of their foe. And God has delivered me from so much, and I'm not just talking about sickness and diseases, but mental and emotional anguish and everything else that Satan throws my way. And I told them, when God does that, don't keep your mouth quiet. Tell somebody what he's done. The other one's called "Pour In Your Love" and it's about God's grace. I was pondering on it one day, and I thought about how he loves me, and how no matter what I do, in my heart or in my mind or my actions, that's not right, he still pours his love on me, through his grace. That's what that song is about. There's another one called "My God" that I ministered here. It's talking about how powerful our God is, it's telling Satan "you are powerful but you're not more powerful than my God. You may be smart, but you're not more clever than my God." And I think about the things God set me free from, Satan did have me but God did not give me to him. So he cannot snatch me out of the hands of God, because my God is more powerful than him, and that's what that song is about.

Deborah Denise is such an awesome artist who does it all!! Thatâs amazing!! Truly blessed!!