Deitrick Haddon: The gospel star scripts and acts in the Blessed & Cursed film 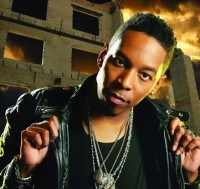 When in 2009 Cross Rhythms last wrote about Detroit's multi-talented gospel star Deitrick Haddon little did we imagine that within a year the singer, composer, choir director, record producer and, recently, pastor would be back with a new project - as a script writer and film actor. The release on DVD of the feature film Blessed & Cursed demonstrates again the extraordinary sweep of Haddon's talents.

Blessed & Cursed is a modern updating of the biblical story of David and Saul with Deitrick playing the part of Dwight Hawkins as he struggles to find God's direction in his life in the labyrinthine world of church politics. Compelled to help his father after his dreams of becoming a Bishop are derailed, Dwight must choose between family obligations and pursuing his own dreams of gospel music superstardom. One day he receives an opportunity to become a psalmist at the city's largest church but this new position is too good to be true as Dwight gets caught in a wicked scheme of jealousy orchestrated by the church's pastor. "I grew up in the church and unfortunately it wasn't all great experiences," Haddon said. "I intentionally brought these up in the movie. I feel this movie will be a witnessing tool to win people back into the church."

Haddon was inspired to pen the film script as he was preparing a sermon. "I'm a pastor now, so I'm doing more studying than I've ever done in my life," said Haddon. "I was studying the story of Saul and David and the dynamics within their relationship.this movie just opened up to me." Haddon began writing a film script and then took it to his manager, Holly Carter (Releve Entertainment), and Tyscot Records' Vice President, Bryant Scott.

Amazingly, for a project pitched by a script writer and actor with no previous experience, Blessed & Cursed got the production go ahead and was filmed in Deitrick's home town. The film also features Tony Award nominee Sheryl Lee Ralph (Sister Act II, Moesha), Drew Sidora (Step Up, White Chicks) and a host of award winning gospel music stars including Karen Clark Sheard, Rance Allen, Kierra Sheard, Jor'el Quinn (21:03), Dr Bobby Jones, J Moss, Mali Music, IRROC and Deitrick's wife Damita. Both the DVD and the 'Blessed & Cursed' CD soundtrack were released in the UK, through Kingsway in September. The gospelcity website asked Deitrick why the Grammy Award winning singer made the unexpected move into films. "Well, I can say I've always had a passion for movies, the arts, theatre. I've always wanted to get into acting. I've always written stories -people didn't know that. That's what I do when I'm not singing, performing or preaching. You can actually tell I'm a writer when you are listening to my music. A lot of my songs you can actually get a vision by listening to my music. I'm a writer by nature. I believe it's a gift from God. About 15 years ago I had a passion during that time to go after God and seek direction for my life. You know when you get out of high school you say 'What are you doing?' Should I go to college or should I do this? The best thing is I had a Mother and Father who believed in me and said 'Why don't you stop and ask God?' I know that's something we usually don't tell young people. My parents told me to ask God what he wants me to do. So I actually went into prayer. The Lord told me in those prayer sessions the world would sing my songs he gives to me. He also said I would be able to tell my stories and do movies. At the time I didn't have a clue about movies but to pay my 10 dollars to actually sit down and watch one. I love movies. I was a movie fanatic but for me doing a movie myself, that was way too far fetched for me at the time. That's why I knew I had a passion for music. The music just took off. Everything God said to me happened. People started singing my songs. It's what has sustained me. I never lost the fact God did speak to me and tell me about movies and tell me I'll be able to tell my stories. So I wrote a lot of stories. I have drawers of stories and things God gave me. Every time he would give a story to me I would stop and write it down. Movies are the beginnings of the next phase of what I'm supposed to do."

Deitrick spoke about the people who helped make Blessed & Cursed a reality. "Actually it's my story but I had a young lady who's very awesome with screenplay writing. Her name is Allison Elizabeth Brown. I have to give her her credit. She really helped me bring this movie to life where you would actually look at the script and actually shoot a scene from it. I had Holly Carter from Releve Entertainment bring her expertise because she's in the film business. She was actually a part of putting out the movie The Gospel. I have to give credit to a young man named Joel Kapity who directed the film because we had a low budget and we couldn't go and get a huge director. I wished I could get a Denzel Washington but my money said no. It was a blessing to meet Joel Kapity from Dreams On Screen Productions who's a good a friend of mine. I have to give credit to Tyscott Records because when I sat down and hashed out the idea in my head we all came to the same conclusion. Let's not try to be big when little got you. Let us do what we can do. I said, 'I know that I could get my music in the stores and my DVDs in the stores. so let's do that.'

Deitrick continued, "I wanted to see gospel artists acting. That was my first mindset. I wanted to give gospel artists a platform. So we went after gospel artists who we thought best fit the characters. We reached out to a lot of the artists, the ones who we felt could do it. A lot of people are scared of acting. They would say, 'I'm not called to do that, I'm a singer and that's it.' Other people said they could do it and they wanted to try out for a part and audition. So we reached out to gospel artists first then next we decided we needed to bring in some professionalism to help balance us out as novice. We needed someone who could help us with these artists to hone in on their gifts and pull out their natural talent. So Kelly Williams from Family Matters signed up to help us. So if a scene started coming off too much or we were not doing enough she helped us deliver the script on that scene. Thank God for her; she was actually pregnant at the time but she was so committed to the project and made it work. We went out to get other talent and got Sheryl Lee Ralph who came on board and then Drew Sidora. We felt we had a good casting roll."

The singer admitted that the film brought Deitrick a steep learning curve. He said, "It's completely different from making or producing a record. The money goes fast because you're working from sun up to sun down. You really have to watch your budget when you're shooting a film because the money can go overnight. You can look up and you can have $100,000.00 and then you can look again and you're down to $50.00. You need to get somebody to really manage your budget. You also don't need to have the actors there for the duration of the entire shoot. You can have them come in and shoot all their scenes in a span of three days. . .two days or four days. It's how you schedule the actual shooting process."

So how did Deitrick respond to those who felt Blessed & Cursed took a pretty critical look at the inner workings of church culture? "I believe people are so tired of the church acting like we're so greater or we're so high and everybody else is so low. When the reality is we have all made mistakes from the preacher on down and we are all just flesh and blood from the preacher on down. We are people striving to do the best we absolutely can. We are people striving to follow in Jesus' footsteps and there are times in that walk where we fall short. The best way to win people is to tell the truth and be transparent. I think this is the best witnessing tool for people to say, 'Man, that happened in my church, I can relate to that. I want to be around a church like that where the people are real. The people are raw. They are not perfect but they are striving and working hard to be a servant for God.' That's what I want people to get from the film."

I ABSOLUTELY LOVE THE MOVIE. Blessed and Cursed touches my soul. I watch the movie at least twice a day....at least 5 days out of 7. It so portray these large churches. It's d o real. I feel within my soul the character Deitriclk portrays. He was so real and the singing and music was 💯. All of the actors and actresses were good. I am really hooked on this movie.

DEITRICK I LOVE UR CHAIN BRAKER SONG. BROTHER THAT ONE SONG OF YOURS WORSHIP YOU IN THE SPIRIT INSPIRES ME. KEEP UP THE GOOD WORK MAN. ALSO LOVE UR FILM BLESSING AND CURSED NEVER KNEW UR FACE BE FORE BUT WHEN I DISCHARGE U ARE THE MAN BEHIND THE MOVIE I WAS SOSO IMPRESSED WITH UR GOOD WORK. LOVE U MAN. I AM AN UPCOMING GOSPEL ARTIST WANT U TO GUIDE ME. THANKS

I love all of Dietrich's music. What a bless!
I wanted to know who is the gentleman in
The movie who was playing the acoustic
Guitar singing in the auditorium as Dietrich's
character walked in? Where can I find his music?

Love all of Deitrick's songs in the movie. They are so inspiring. It created an atmosphere of worship in me. Thank you for using your talent to bless the world.

Praise God! this movie touched me in so many ways... unimaginable what music is capable of, Deitrick i wih u cud come to my country and share the gospel in the way GOd has been using u!

absolutely fantastic moved me. the power of God touched me while watching this film..the song well done ..awesome ..thank you detrick...long