Derek Webb: US singer/songwriter talks about his ministry. 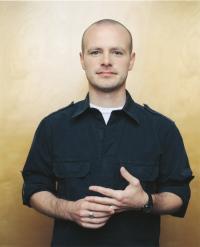 More than two years after his departure from the hugely popular US folk pop band Caedmon's Call, Derek Webb has continued to chart an unconventional course as a solo artist. For his debut, 'She Must And Shall Go Free', this singing teacher of theology sang about the life of the Church. Derek's follow up, called 'The House Show', was recorded in a living room setting that took the concept of an "unplugged" concert album into new territory as he interspersed teaching with stripped down versions of his songs. And now his new album, 'I See Things Upside Down', shows another idiosyncratic approach with songs about God, life and, er, T-shirts. As those who caught Derek's recent UK concerts will know, Derek is a natural, intimate communicator.

"I love just getting in a room with a few people, just me and my guitar - no microphones, no PA system - and just sharing. I have learned so much in the last year and I just want to keep doing it as much as I can." Webb said he already had a chance to experience the large crowds and success on a larger scale during his time with Caedmon's. Now he feels God has called him to a smaller scale of ministry. As those who have heard his powerful debut album will know, Derek is particularly passionate about the Church. He commented, "It's the same dilemma patriots have always had. Patriots love their government enough to be able to criticise it. I love the Church; the Church needs to hear the Gospel. I feel very encouraged at the camaraderie I have felt with college kids, families, even pastors, as we all share our concerns. If I can continue doing this, I am very happy."

Turning 30 has awakened an important understanding about his vocation. "I'm getting more and more secure about the fact that I want to make music for adults. That's not an easy thing to make sense of when music is categorised the way Christian music is. You either play 'adult contemporary' style music or you play for youth (junior high and high school), and there's not really much in between. I guess I'm learning that I'm kind of neither. I'm an adult and I write and sing songs about adult issues. But I'm also into folk and roots music, which tends to appeal more to younger audiences."

Derek is no purveyor of shallow religious truisms. He takes his faith seriously and sings about doctrines and concepts thought through after large amounts of study. But neither is he the archetypal academic. He sports numerous tattoos though even those have theological content. On his left arm, Derek has the five tenants, or "solas", of the Reformation. Written in Latin, they translate as follows: "Scripture alone", "Christ alone", "grace alone", "faith alone" and "to God alone be the glory". It doesn't end there. "I have a Canterbury cross on my left forearm, a Celtic eternity knot around my right arm and the Greek word for 'grace' on my right thumb."