Dillon Chase: The rapper with the Switch radio hit 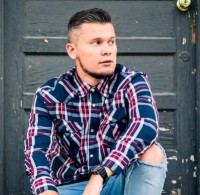 Dallas, Texas-based rapper Dillon Chase has been on the scene for a number of years, already with six albums to his name along with numerous single releases. But 2019 has definitely been his breakthrough year with a feature on Switch's international hit "Symphony", which topped the Billboard Christian Hot AC/HCR charts back in February. After this Dillon signed with the biggest Christian music company, Dream Music Group, for their new hip-hop label One Moment Records and has released his first single with them.

But it hasn't always been an easy ride for the 34-year-old rapper from Ada, Oklahoma. Growing up in a broken home and with parents riddled with drug and alcohol abuse problems, Dillon saw his father overdose on drugs numerous times, the first being at just five years old. Chase began rapping at the age of 14 to try and cope with the troubles that surrounded him and his life. Speaking with NewReleaseDaily, Chase said about his early raps, "In the summer of 1999 I began writing lyrics to create my own world as a means of escape from the grim reality of drug and alcohol addicted parents."

It was a reality that involved Chase being passed from pillar to post, living with various family members whilst his parents tried, and ultimately failed, to kick their habits during numerous stints inside rehabilitation facilities. They even occasionally visited a local church, taking Dillon with them. But all the latter did was make Dillon question why Christ wouldn't take away his parent's addictions.

Over the years, the young rapper worked at developing his art. It was also at the age of 17 that he fathered a child, Julian, who was eventually to double-up as Dillon's backing DJ. It wasn't until his late teens when Dillon found God. In 2004 at the age of 19 and as a High School senior, Chase was taken in by a Christian family. Seeing the effect that Christianity and believing in God had on their lives caused him to embrace God. He explained, "My friend's family were Christians and they took me in in my senior year and they showed me the power of the Gospel. It was evidenced in the way they lived their life, how their family was structured." His Christian conversion led to a radical change in his lyric writing.

Dillon released his first independent album in 2006, 'The Light.' That release garnered attention in the Christian music scene and in 2007 Chase was invited by fellow hip-hop artists Lecrae and Sho Baraka to participate on the 116 Clique project, '13 Letters'. Dillon's track was "Take Em Back". The 116 Clique album went on to peak at 29 on the Billboard Christian Albums chart and 10 in the Billboard Gospel Albums chart.

In September 2008 Chase signed with The Small Kingdom City Records and released two projects; 'Pause' and 'The Pursuit', the latter of which attracted so much local attention that it was eventually re-released nationally. The rapper was developing his prowess as a street evangelist/minister with Stand Out Ministries and in 2011 it was under that ministry's record label that he released his second album, 'Weak'. Collaborating on the project were Tre Marquis, McKendree Augustas and fellow 116 Clique member, Lecrae.

Dillon had married in 2005 and today has four children. It wasn't until 2014 that Dillon was able to realise his ultimate dream of being able to support his family full-time through music, allowing him to quit his banking job and focus solely on furthering his musical endeavours. It was also in 2014 that his third album, the independent 'BDFFRNT' would see the light of day. Two years later his fourth album, 'Speak Up, Vol 3' hit the airwaves. LyricalSpiritual.com enthused, "Dillon Chase got bars. He dropping scriptures, testimony, all with a crazy delivery and word play. The message of Christ is front and centre on this project. It wasn't hidden and you don't need to decode the message of Christ."

2017 saw Chase doing something out of the ordinary for him, releasing the album 'Drifted' which was based on an allegorical tale which he had written himself. The story involves a character that is so obsessed with going into outer space that his relationship with his family fails due to the single-minded fascination which he perpetuates throughout the story. It's a story which he and his two eldest children are similarly fascinated with, owing to the mysterious nature of outer space. Speaking with JamTheHype regarding the album and story, Chase said about the title, "It's there just to encourage everyone to fight the drift. Recognize that you have the tendency to drift and understand that the way you work against that is by weighing down your anchor in Heaven."

2018 didn't get off to the strongest of starts for Dillon. In February Chase's youngest son, Josiah, was in Intensive Care Unit for two weeks with respiratory failure, pneumonia and fluid inside and outside the lungs. With prayer Josiah pulled through the ordeal and his recovery allowed for Dillon to go back on the road touring new material. It was there that Chase put together the majority of music for his 2018 album, 'Joyful Loser'. Embracing the technology that people have at their disposal these days, Chase was able to turn any room into a recording studio - including hotel rooms, which also formed the basis of a successful project entitled 'Hotel Sessions', which he released as an EP in the same year.

Whilst on the road, Dillon spent a lot of time performing for youth church camps, spreading his message to young people and helping them to find their identity. Something which large numbers appeared to be struggling with. It's an audience which makes up nearly 75% of his live shows, but that is something which Chase has embraced and is happy to be part of. In a conversation with JamTheHype Dillion admitted, "They're the largest demographic of people who are consuming music. I'm like, what can I give them that is going to encourage them, guide them?"

'Joyful Loser' was to be the last album that Dillon Chase released as an independent artist. But now, things have moved to a new phase for the rapper. After his appearance on Switch's "Symphony" the rapper has signed to Dream's One Moment Records. They have already released the first single "Paradise" and you are likely to hear it on Cross Rhythms Radio pretty soon.

The final song on his 2017 album 'Drifting' is called "Over Under". When speaking about the song Dillon effectively set out the cornerstone of his life. He said, "The track is about finding our identity, finding our purpose, running our race based off who we are under Jesus. You've got to get over the cares of this life and under the Son of God, Jesus, to truly be anchored."

The opinions expressed in this article are not necessarily those held by Cross Rhythms. Any expressed views were accurate at the time of publishing but may or may not reflect the views of the individuals concerned at a later date.
About Tom Donlan

Tom Donlan has a degree in journalism and lives in Stoke-on-Trent.