Dion: The '50s and '60s hitmaker is no longer wandering

A junkie for 13 years, DION has been set free by Jesus 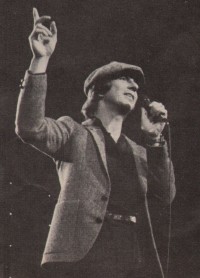 When "The Wanderer" or "Runaround Sue" get their numerous 'golden oldies' plays on Britain's radio, few realise the radical change that has occurred in the Bronx-born singer who sang them. Dion is no longer the archetypal New York rebel. To quote from a more recent Dion song, "The boy carouser on the street is a father now in his slippered feet". That song, "The Truth Will Set You Free" documents precisely what has happened to Dion Dimucci. "I was a junkie for 13 years," he recalls. "I used heroin. When it almost killed me I gave it up. The way I did that is I became an alcoholic for two years, then in 19681 gave my life to God, to the best of my understanding. Someone in a drug program had shared with me that God would help me if I sought Him and asked. And as well as I knew how, I did hand those problems over to Him. Since 1968, I haven't had a drug or a drink or a cigarette. He gave me that on credit!"

During a decade of self-discovery and spiritual growth, Dion understood Jesus intellectually, but not as his personal Saviour. By 1979, though, in what he describes as his "eleventh year of being a man of prayer and faith," Dion felt that God's will for his life was becoming a bit vague. He felt himself starting to "get restless and maybe slip. Then one day I saw Jesus in somebody, and I wanted the God that was in him. At just the right time, a neighbour told me about it. "I'd been denying Jesus," Dion later realized. "I thought that He was a man who lived 2,000 years ago, and I thought that some people didn't recognize Him. I didn't know it was me." Right after that, Dion began poring through the Bible and absorbing it "like a sponge." His music took yet another turn-toward "life, love, light, and everything good."

For more on Dion visit the Dion artist profile