Distinguished: Worship leaders originating in the arena of American football 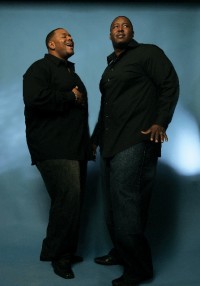 The demanding and at times brutal sport of American football is not a scene where one might expect to see worship leaders emerge. Yet it's two former NFL players Gino Mingo and Marcus Price who constitute Distinguished, a gospel worship duo whose 'Warriors/Worshippers' album is released this month by Authentic Media. The two former football pros have been praise and worship leaders at Shoreline Christian Church in San Diego, California for the last six years. Marcus explained to journalist Em Fergusson how Distinguished was formed, "I was playing football and part of that time, Gino and I were regularly planning to do two solo projects. Over the course of time in the church, we just felt in our hearts to work as a duo. That's really how we got our start - we just really got our message and what we wanted to say before we got started. . . I always had a love for gospel music and always enjoyed not just the singing of gospel music but what it meant to me, personally. So even though I was still playing, I grew up in the church, in a Christian home. I was always exposed to Christian and gospel music so I had a special love for gospel music all along. Even while I was playing and when I retired it wasn't like I had an epiphany for gospel music; it was always in my heart."

Gino too grew up in a Christian home. He said, "It's interesting because when I laid down my football career, being called into the ministry and singing all of my life, it was a natural transition. When I first joined the praise and worship group in my church, things just took on a natural tone from that point."

A couple of years ago Distinguished recorded their debut album, the independent 'The Unfolding'. Commented Gino, "Israel Houghton and his wife wrote most of the songs [for 'The Unfolding']. But on this [new album, 'Warriors/Worshippers'], Marcus and I wrote seven of the songs. 'Warriors' has a different feel to it. We feel people can feel God's presence."

Gino Mingo told Jo-Carolyn Goode, "One morning I was meditating on the Word, Exodus 33, one of my favourite chapters, and I was reading the passage where Moses was talking to God and he said, 'If you do not go with us, I and your people, how will they know that we have been distinguished from all others on the Earth?" At that moment the spirit of God put this magnifying glass on this word distinguished."

Gino spoke about the inspiration behind 'Warriors/Worshippers', "I think 'Warriors' really epitomizes our hearts for God and message we want to convey as Christian men - it really runs parallel with the life of David. David was the greatest king that never lost a battle. There's such a beautiful dynamic there with this man who is a warrior for Israel but equally a man who loved to worship God. He loved to help people get through struggles and heartaches in their lives. How to be victorious when things don't look like they're going right. It's really just something that has taught me to turn to God and how to live our lives right. I think we don't see a lot of how to be a man and turn to God in the Body of Christ."

Marcus continued, "When we started out, our whole scene was - we didn't just want to be just another group doing another CD. We did this with a mission in our hearts.these are the days and times it takes a warrior to carry out the things that God wants us to carry out. We have to stand for righteousness and do the things we are supposed to do. We really want to raise the standards on how we worship, how we carry ourselves."