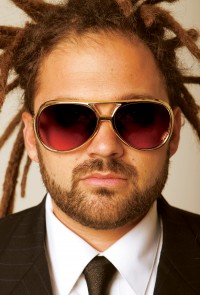 Southern California's Dominic Balli performs Christian music in a style which has led to the pigeonhole "CaliRockReggae". The singer/songwriter explained, "Art is an expression of who you are. I'm just a half Italian, quarter Greek kid from California, but somehow inside of me there's this little reggae dude just trying to get out. The most common comment I hear is, 'I don't even like reggae, but I love your stuff.' I love that because it means that my music has become accessible to fans that might otherwise totally shy away from anything even reminiscent of reggae."

Dominic's second album 'American Dream' has received ecstatic reviews with JesusFreakHideout website pronouncing it "unquestionably one of the best albums released in 2011." The singer/songwriter from Oxnard, California has made spectacular progress since he emerged in 2008 with the independent album 'Public Announcement'. That album made it into iTunes Top 30 Reggae Albums chart, selling more than 20,000 copies. After the success of that Balli was able to perform alongside a wide range of artists both Christian and non-Christian including Natasha Bedingfield, Jazon Mraz, Hawk Nelson, George Clinton & The P-Funk and Ziggy Marley. Dominic spoke to Cross Rhythms about his Marley concerts. He said, "I opened for Ziggy a couple of times. He isn't really a rasta, he is more a universalist. I don't know if he would describe it like that, but he is very accepting with a one world, one love vibe. I've opened for him at a festival and then another time when I was the only opening artist. There were about 1200 people there, me and a guitarist, and the people were engaged on every single lyric. There is something to be said about being authentic, if you're telling the truth in a non-judgmental way. Jesus would tell the truth, but not in a judgmental way, he would tell them to stop sinning but not by condemning them. When I approach a non-believing crowd, I don't approach them like Jesus did the religious leaders, because he was very harsh to them. But I take a humble approach; they are people who need bread, beggars looking in the same place I was before I came to Christ. I am just a beggar who found bread; it is giving me everlasting life and satisfying my every need."

One of the numerous stunning songs on 'American Dream' is the title track. The song came after an epiphany that he, like millions of others, had bought into the American Dream to pursue success. He said, "I basically grew up my whole life with that kind of goal in mind: whatever I want to do is possible, and it's all about me. It was all about the steady job with the nice income, and when I got married, it'd be great to buy a house and have brand new cars and really nice clothes. It was all about setting up my life to be comfortable, which is at the heart of the American Dream. A year and a half ago my wife and I bought our first house, and for the first time in our marriage we didn't need anything; we weren't going month-to-month on pay cheques. And when the comfort and ease of that life style set in, it started to kind of rob my joy, rob my faith, rob my purpose in life. This complacency, especially spiritually, set in. Though I would've never said it, it was almost as if I didn't need anything else, including God. In early 2010 I realised that my life isn't all about me and my dreams and what I want to do and my comfort and my safety and my stuff. It's all about loving and serving other people and the God who made me. When I realised that, it started to change my life and my perspective, and 'American Dream' came out of that."

The version of the song on the album contains a rap from Sonny Sandoval, frontman for San Diego hard rockers P.O.D. Said Dominic, "I had to have Sonny on board. He's also on the music video of the song. Sonny did a great job. One thing though, some radio stations don't like sections of rap and he basically raps in the track so we did a mix that doesn't have him on it."

Other guests on 'American Dream' are Jamie Moore (Toby Mac, Mandisa) and Brazilian roots artist Nengo Viera. Dominic explained how he got to know Nengo, "I went on tour with Christafari in 2008 in Brazil and I opened for them. We did 25 gigs there and I developed a fan base, so nine months later I went back with my band and did seven back-to-back shows. 2,000 people a night. Brazil is one of my favourite places in the world to perform. Whilst I was there, I was introduced to the Favelas. They are up on the hills of every major city. They build these little shacks. They don't have enough water and electricity and they are run by the drug lords at the top of the hill. There is a lot of drugs, prostitution, people getting raped. The people who live in the Favelas aren't even recognised as civilians. If you look on a map there will be no street names, just green, as if there is nothing there, even though there are hundreds of thousands of people living there. I did some research and talked to some people who had lived there, and I was heartbroken. I wrote this song called 'Oh Favela'. Nengo is a great reggae artist in Brazil, and he actually grew up in one of the Favelas so it was great to have him on the track. We recorded Nengo in Brazil and it was actually his son on the drums, so it was great to have them both and record some of it in Brazil."

Not all the songs on 'American Dream' are highly-charged socio political lyrics. One, "Take My Love", was inspired by his wife. Commented Balli, "I met my wife when I was 17 and she was 16. We were friends for two more years before either of us ever had a thought of anything more. At the end of her senior year of high school she invited me to go to her prom. That night we fell in love. We got married a year and a half later and in February of 2012 we'll celebrate our 10 year anniversary. 'Take My Love' is our story. I wrote it over the course of a week-long vacation that we took this last summer to the North Shore of Oahu, Hawaii."

Another powerful song on the project is "Twenty Seventeen". Said Dominic, "The Old Testament story of 2 Chronicles 20 has become one of my favourite passages of Scripture. It's so radical how God used something as simple and beautiful as praise to accomplish something so huge and epic. As I was touring Europe in the summer of 2009, I decided to take a crack at retelling the age old story. . . CaliRockReggae style."

The most moving track on the album is "Daisy's Song". Dominic recounted, "My daughter Selah has a best friend named Daisy Love Merrick (granddaughter of world famous surfboard shaper, Al Merrick). In September 2009 Daisy began to complain of stomach pain. When she went to the hospital they found a cancerous tumour the size of a Nerf football in her abdomen. The day I got the news I wrote this song. In the summer of 2010, after seven months of chemo, Daisy was declared in remission. However, over the next eight weeks a tumour the size of a grapefruit had developed once again in her abdomen. Daisy's future is still uncertain but we are all choosing not to let fear and doubt rob our joy and peace but instead to trust in the God who holds Daisy's future."