For almost a decade the Canadian rock group Downhere have been receiving plaudits for their blend of infectious hook-laden rock combined with an uncompromising Gospel message. Bursting out of their home country's alternative rock scene the four-piece band have earned themselves a Dove Award for Modern Rock Recorded Song Of The Year, two Juno Awards for Contemporary Christian/Gospel Album Of The Year and Best Gospel Album, Canadian Gospel Music Association Covenant Awards for Rock Album Of The Year and Rock Song Of The Year and a further Dove nomination for New Artist Of The Year. The group are now preparing their sixth album and are offering fans a taster of what it has to offer with a downloadable EP 'Two At A Time: Sneak Peeks And B Sides'. The project contains "sneak peeks" of the new songs as well as some older, previously unreleased tracks. Expectations are high; their punchy self-titled debut album released in 2001 was a promising start and the records that followed just got better. 2003's 'So Much For Substitutes' was, according to one Cross Rhythms reviewer, "A totally corking album, full of irresistible hooks." Mike Rimmer was equally impressed with 2006's 'Wide-Eyed And Mystified' ("Superb pop melodies, huge choruses and a stripped down rock sound make for an excellent album.") Mike interviewed the group that year and suggested they had "metamorphosed into mystical spiritual romantics"!

Since Mike's meeting with the group Downhere have shown no signs of slowing down. 2008 saw them build on the winning formula of 'Wide-Eyed. . .' to release the striking album 'Ending Is Beginning' - their third release to receive a 10 square CR review. It was an ambitious project that ranged, musically, from melodic pop to full on rock combined with articulate songwriting that wasn't afraid to tackle difficult subjects. Co-lead vocalist/guitarist Marc Martel told Matt Johnson of Jesus Freak Hideout, "With 'Ending Is Beginning' we did set out to make a more serious record. Not a dark record, but a serious one. The motto we were following the whole time was 'something people can sing along to no matter the situation life has handed them.' Our central theme on this record is hope. Hope in Christ. Hope that is rooted in God's word, and therefore a hope that will never leave us dry or wanting in an ultimate sense. It's definitely our most mature-sounding album to date."

The majority of the songs that make up 'Ending Is Beginning' were written on a short break between touring and going into the studio lending the material a focused, urgent edge. Speaking on the band's website Martel explained, "We wanted to make an important record. You get the sense in the world right now that maybe something really big is going to happen soon, that maybe the way of life we enjoy isn't going to last much longer. We had that in mind as we wrote; we want to write songs that have meaning, no matter how things are going. With our previous album 'Wide-Eyed And Mystified', I think we found our sonic stride. With 'Ending Is Beginning', we're building on what we've discovered we really are. We've found the balance between Jason [Germain] and me as lead singers."

Bassist Glenn Lavender elaborated, "The journey to finding the right songs for 'Ending Is Beginning' seemed to be one that was a little longer and more difficult for some reason. Part of that was a really busy schedule leading up to recording which doesn't allow much time for writing. However, with the end result, I really feel like many of the songs reflect things we as a band and individually have been going through and that makes it feel like more of a project that is 'ours'. We've also taken some chances with the music. We have explored some different sounds and styles and had a lot of fun doing it." 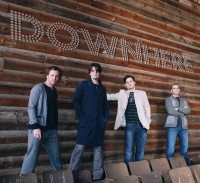 The next album by the band was a rare thing indeed, a really rather excellent Christmas album. Released in 2009 'How Many Kings: Songs For Christmas' was a mixture of traditional numbers like "We Wish You A Merry Christmas" and "Silent Night" combined with original compositions. CR's reviewer noted that this was a Christmas album "you could easily listen to in June without wincing." The album's title track had previously been featured on the various artists 'Bethlehem Skyline' album and posed the question, how many kings would send their son for the sake of mankind?

Asked if it was difficult to come up with an original idea for a Christmas song Martel replied, "It was really hard. 'How Many Kings' is the Christmas song I'd wanted to write all of my life. The sentiment was something that I hadn't really heard in a Christmas song, and I knew it needed to be written, so I wrote it. I also found myself struggling with the whole 'this doesn't sound like Christmas' phenomenon with every new song idea [for the album]. But really what does Christmas sound like? I think it 'sounds' like tradition. It's more than adding sleigh bells to the track. I think it's just a good song that everyone who hears it wants to sing over and over every year. I have to keep reminding myself about that. Like if Bing Crosby's 'White Christmas' was a love song it wouldn't sound like Christmas would it?"

With Downhere showing no sign of running out of creative energy there's no doubt that large numbers of Christian music fans are going to be downloading 'Two At A Time: Sneak Peeks And B Sides' with considerable anticipation.

For more on Downhere visit the Downhere artist profile