Downhere: The Canadian Rockers Have Delivered One Of The Year's Best Albums 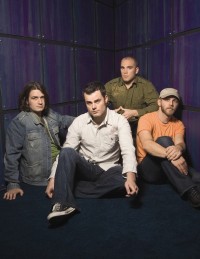 It is the nature of my life that I meet an awful lot of bands and artists. For the most part, it'll be back stage at a gig or in an anonymous hotel room. Questions will be asked, questions will be answered, hands will be shaken and then I'll be off with interview recorded, a few insights into the band under my belt and that'll be that. From time to time, a more meaningful relationship will be established and back in April, in my hotel room I was genuinely looking forward to chatting again with Downhere.

Here's a bunch of Canadians who are working hard at developing their art and mixing it with a genuine spirituality that questions, explores and seeks to minister to others. When the idea of an intelligent rock band often feels like an oxymoron in Christian music, Downhere are the real deal. More than that with their newest album 'Wide Eyed And Mystified', they have delivered their most accomplished release yet.

Bassist Glenn Lavender is the first to greet me with a friendly hug. It's a beaming smile from singer/guitarist/keyboaradist Jason Germain. Singer/guitarist Marc Martel is the most relaxed of them all. Today he is wearing Clark Kent-style glasses and has a healthy stubble on his square jaw and rather unnervingly has a camera and takes photos of me during the interview. Last one in, this must be a new drummer I've not met before! Last time I saw Jeremy Thiessen he had dreadlocks but today he is a skinhead! He explains how he sold his hair to buy an engagement ring! "I got $250 for the dreads and I paid FAR more for the ring. Just for the record! But as a professional musician every little bit helps."

'Wide-Eyed And Mystified' is a great album title and it rhymes! They point out it also has the same number of syllables as their previous album title, 'So Much For Substitutes'! Although with his glasses, Marc looks like he may make a trip to a phone booth and change into a super hero rock star, it is true that when you chat to him he's very mild mannered. But strap a guitar around him and push him onto a stage with the band and he turns into a fully fledged rocking communicator. Blessed with a soulful rock voice sometimes compared with Freddie Mercury, Marc explains, "The title of the album is taken from the song 'The More'. I was looking for a title that kind of sums up as much as possible. Just being where we are in the band's history. We're with a brand new label and almost re-introducing ourselves to the public. It's just a statement of how we feel. The temptation is to get jaded with all of this stuff. But we've really tried to remain stripped down to the basics. We try to remember why we do this in the first place. The title is saying that we still love this. I should elaborate on the mystified! I think being mystified has been a theme of ours from the beginning, since our first album. The first album was really all about the greatness of God and how we will never fully understand it. I think that carries through in all of our music. There's a song on the album called 'Unbelievable'. It's really a song that's just saying we're never gonna have it all figured out. We're just thankful that music exists and we're always inviting people to keep writing songs because the greatness of God is unsearchable."

In their recent history, the band's relationship with the Word label group came to an end and they have been working as an indie band for the last couple of years. Most bands would have crumbled in the face of losing their record deal but not Downhere. The band continued to write and tour and worked at finding a new label. Jason shares, "We're on the road a lot and that's really where we live and exist. It's not in the label world. So we just kept doing what we've always done. We were independent for a year fulltime before we ever signed. We've always had a do-it-yourself mentality and we just really trust in God."

He continues, "I think there's a temptation in life, when adversity comes.you can react in two different ways. You can become bitter and think the world needs to cater to your whims and your wishes and dreams and aspirations. Or you can believe that God is in control and that he ultimately has the final say, even in the mundane circumstances. We sat down as a band and made a choice to trust God. In his timing, it was a year before we signed to a new record label and it was a long process. And in that process came a lot of songs about faith and really trusting God. It's really cool how he's used the time in our lives to kind of mix us together and really formulate not only the direction of what we're communicating but us as people as well."

The band had been aware in the final months of their relationship with Word Records that things were coming to a close. Ironically, the band won a Dove Award that year and they remember the label's After-Dove Party. Marc recalls, "I think we were the only artists on the label proper who won a Dove, and we were being ignored!" He laughs, "I mean, it was like, 'Okaaay then! Alriiight! Excellent!'"

Jeremy adds, "It was a really good season in our lives and in our careers, to be able to have that time to step back and re-examine what we're doing, what we're about and ask, 'Lord are you still in this? Is this still where you want us to go? Is it time to throw in the towel and wrap up?' So we came out of that I think even more energised and excited than ever and really looking forward to finding another label partner to come alongside and work with us. We ended up with Centricity Records who is a dream label for us."

'Wide Eyed And Mystified' is definitely the beginning of a new chapter for the band who have managed to combine all the best elements from their previous recordings into something that really hits paydirt. Superb pop melodies, huge choruses and a stripped down economic rock sound make for an excellent album. Jason explains the album's main theme. "There is a passage in 3 John and it's a charge to the churches to be hospitable to these people who are travelling ministers who go and share God's love with the Church. It just jumped off the page to me. I really feel like God is using our music in this time. A lot of the church culture has a real good head knowledge of what salvation is but there's this disconnect between the heart. I really feel like God is using our music as a link. It's a place to work out their faith in an emotional language. Almost like the emotional side of God - the romantic, poetic side of his Church is wooing the other side, you know? He's romancing us."

He continues, "The romance of the Gospel is something that I think is really close to the heart of this band right now. And just how this relationship is so similar to a bride and a bridegroom. How they interact. It's very much like that." 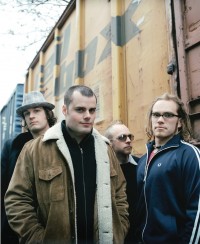 Every April, the Christian music industry gathers in Nashville for a five day shindig culminating in the Gospel Music Awards. Every year I visit the city to interview as many artists as I can and to watch bands showcase. Traditionally there's a showcase hosted by the Word family of labels and although the band are no longer on Word, their music is distributed by the label. So it is that I find myself downtown at a showcase where many new bands are playing to international distributors, retailers and journalists like myself. We're a hard crowd to please and I'm making notes on each act. At this stage there are plenty of groups that I've never heard before and who haven't yet recorded debut albums. In the middle of all of this, Downhere play songs from their new album and their five years' experience shines through as the band play a short set and talk about the album.

One of the songs that leaps out is "A Better Way". Jason introduces the song and there's something about its uplifting melody, intertwining vocal lines and the strength of its message that immediately grabs my attention. I sit at my table watching the band perform and am moved by this expression of God's love. More than six months later, the song continues to touch me every time I play it. It's definitely a nomination for my song of the year for 2006.

When it comes to talking about God's romance, Jason observes, "'A Better Way' is a song that talks about it. It's responding to God's love. We all know the classic love story and we've tried to repeat it so many times. Where there's a lover who overcomes great huge obstacles to show how desperately and authentic his love is. The final climax is the lover on one knee to a crying subject who answers. I guess we want to be the band who's sharing OUR story and sharing THAT story and that people can identify with the poetry and the romance of the Gospel. Just recently I think we've come back to the simpler things. Our first record ('Downhere', 2001) was all about how big and great God was. Moving to the States with the second record ('So Much For Substitutes', 2003), we wanted to have a prophetic role. We maybe failed in that sense by pointing fingers instead of inviting. I think this album is like an invitation to fall in love with a God who is great. And all the motivation can come from that. We've learnt that pointing out problems that we have is not the best way to lead the pack. You just have to step out there and share your story and share your testimony. That's the way the disciples did it."

To Whom It May Concern,

I'am a Canadian artist and seven years ago I wrote a song called Yelling In The Street. If you listen to this song I believe you will find it applies to the disaster going on in Haiti. I would like to donate proceeds from this song to the haiti relief program. Visit www.yellinginthestreet.com to upload this very special song. If possible sign guestbook while you are there.

Since the year 2000, there hasn't been a better band in my mind. I don't understand why they aren't just HUGE in the Christian music world because they absolutely rock. They also are the most real, down-to-earth guys you can meet. If you know Christ, their music can encourage nad help you grow. I hope they play in MN more and more!

I enjoyed the artle & insight I haven't heard before on this extrodianry band. I can't go a day without listening to their fantastic CD.

For more on Downhere visit the Downhere artist profile