Americana maestro Drew Holcomb has, with his band The Neighbors and as a solo, played over 3,000 gigs. Recently at one of them, at The Maze in Nottingham, he found time before playing a dazzling set with guitarist Nathan Dugger to answer a few questions. Here's what he said.

Tony: You've never felt any particular constraints to write songs or to not write songs about certain things?

Drew: Certainly not. As an independent artist, you have the freedom to write whatever you like. I feel constrained in a good way to write songs for my audience that hopefully will mean something to them. So I constrain myself not to try too many things I feel are outside what works with my audience. You'll never hear me tracking with a bunch of synthesisers or fake drums; but that's only out of taste.

Tony: Your audience is difficult to identify. It's quite a mix of ages.

Drew: It is; it's that way back home as well. I hope and aspire to be the kind of songwriter that the songs don't necessarily speak to a certain time in your life: they speak to people who are grandparents and people who are teenagers. Obviously not every song can be completely universal, but in the same way that great songwriters like James Taylor or Bob Dylan, their music matters to anybody with the inclination and the ears to give it some time; I hope my music will find those same kind of listeners. So far - even though it's taken a long time - that's definitely been the audience we've built. It's just song-lovers, and that's an ageless demographic.

Tony: Are The Neighbors still in existence?

Drew: Yeah, the Neighbors are very healthy. Nathan, the founding member of the band, is here with me. There was one other member, Rich, who's been in the band eight years, then the rest of the band is a bit of a rotating cast, which is fitting for the band because, if you will, the "neighbourhood" is a pretty big umbrella. We've probably had 10, 15, 20 different people play with us over the years. Lots of them have made it onto record with us. For a while there was a core group: we had a drummer named Jon Radford, and my wife Ellie. But as we've gotten older, different people decided to do different things with their lives. It's always been a respectful conversation. In the case of Ellie, we had a kid and toured with the kid for a year, but it got to be not the right for our family, and that took precedence over what was right for the music.

Tony: How did Ellie's album come about?

Drew: We talked about it a lot over the years. It started when she was trying to write songs for the band: she would end up writing songs that didn't fit the band because they were more Christian. After that happened a few times I said, 'Listen, you need to write what you want to write; it doesn't have to be for the band'. That's when the first EPs started to make way. I saw her do a few events on her own - watched her sing and share her story. I was amazed at how good at it she was. I felt like having her on stage singing background vocals was like caging a tiger. We had some long talks about what it would look like for her. It's like that scene in Indiana Jones where he steps out into the abyss and can't see the walkway - but it's there. It came at the right time for our family. She's too creative to not have that outlet: that's the songs she writes, and that's who she is. It was a natural departure and a natural creative enterprise that came from sitting down to write.

Tony: Will the solo career mean she won't be in the band anymore? 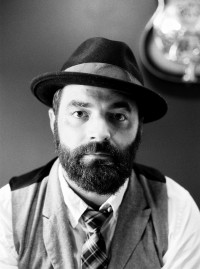 Drew: Touring-wise she's participating very little. She stopped touring a year ago before her record came out. That was more to do with family, but because of the success of it the competing schedules have made it difficult for her to come on the road with us. We try to make it so we are home at the same time; and we're home more than we're gone, which is great. It's quite a logistical challenge. She's still making some special appearances: we're doing some shows where we met in Knoxville, also in our hometown we sold out the Ryman. Occasionally we'll do a duet show, just the two of us - kind of 'an evening with Drew and Ellie'. On the new record she sings on four of the 12 songs, so she still has a presence: it's still there, but it's certainly a lot less than before.

Tony: Tell me about the new record.

Drew: It's called 'Medicine'; it's produced by the band and co-produced by Joe Pisapia, who's an engineer and producer in Nashville, and also a fantastic musician. We recorded it last summer over eight or nine days. We think it's hands-down the best work we've ever done: that seems to be the general response both from our fans and from the press.

Tony: Is that still in, for want of a better phrase, the Americana genre, or are you stretching out in any way?