Drew Holcomb with Nathan Dugger Live At The Maze

The Maze in Nottingham has down the years become an epicenter for Nottingham's flourishing music scene. In years past Amusement Parks On Fire and Jake Bugg have played there and though some might flinch at some of its eclectic scheduling, giving a platform to such dubious delights as Sh*t Pop #4 and Septic Psychos, it's also a place where you can catch a gig by folk music icon Martha Tilston or tonight's attraction, Drew Holcomb playing the last date of his nine-date UK tour. The Maze may be a small venue but it's packed to the gills and when Drew climbs onto the stage he's greeted with a barrage of clapping normally only heard by stars. As one journalist observed recently Drew Holcomb & The Neighbors remain "just outside the walls of the fame making industry." But tonight he's among friends and fans and the groans that greet the news that two gigs earlier Drew had sold the last copy of the Drew Holcomb & The Neighbors' new album 'Medicine' they'd brought with them from Nashville shows that this extraordinary Americana songsmith won't be outside those walls for too much longer.

Drew and Nathan Dugger (introduced amusingly as "a neighbor") kick off with "Tightrope", a new song from 'Medicine', a gutsy declaration of life's difficulties sung with a touch of Celtic soul ("I feel like an old soul/I feel like a sinking ship/I can't get no sleep/I can't just let it be/Like I'm walking on a tightrope"). The next song, "American Beauty" ('Medicine''s first single), features some delicious, slow guitar work from Nathan and some telling lyrics about an encounter with "a gorgeous vagabond". The crowd is gripped as Drew's rich baritone sings out, "Her blue eyes shine in summer sun/Her kiss felt like a loaded gun." Drew explains that the next song is an old one written for his wife Ellie (who after years of travelling with The Neighbors has now become a CCM recording star).

Like just about all of Drew's songs, the imagery of "I Like To Be Me When I'm With You" sticks long after the song has gone. "With you I can be myself/With you I don't have to be somebody else/It's like puttin' on my favourite pair of shoes/I like to be with me when I'm with you." The song recounts how he'd rather drive an oldsmobile with his love than a red Ferrari without her and how if he won a million dollars he would give it away to spend more time with her. Drew tells a story of how when asked to sing some songs at a middle school run by a friend he sang "I Like To Be Me." before being accosted by a student who asked him if he really meant his words about giving away a million dollars for a girl. When Drew assured the student that he would, the response he got was to the point: "You're an idiot!"

One of Drew's best ever songs follows, "Another Man's Shoes" from his 'Good Light' album, with its telling exhortation to empathise with our fellow humans. Following that there is "Anywhere But Here" and the '70s-style "Avalanche" before Drew talks about the video he made recently for "Here We Go" where in response to the observation that most of the songsmith's videos were decidedly serious, Drew dressed in a banana suit for the video shoot. Thankfully he doesn't don such clothing for the raw and vibrant rendition that he and Nathan gives the song, which has the entire audience shouting out the "Oh no!" and "Here we go!" parts. The next song, "Shine Like Lightning", expresses the joys of playing music with friends, which is followed by Drew's tale of how, with some trepidation, on leaving college he went to tell his dentist father about his decision to pursue a career in music. Rather than the expected objections, his dad took Drew off to the music shop to purchase the best guitar his father could afford. The affectionate "Tennessee" follows. Then comes one of Drew's finest compositions, "Live Forever". The dark verse "Laughter is the only thing that'll keep you sane/In this world that's dying more and more every day/Don't let evil get you down/In this madness spinning round and round" is followed by a transcendent chorus, "I want you to live forever/Underneath the sky so blue." 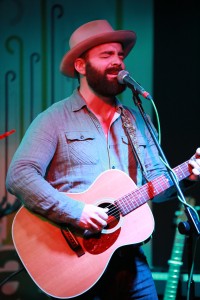 Nathan Dugger, who all evening has sung immaculate harmonies, finally gets to sing one of his own compositions, "Good Time Girl". Drew returns for "Heartbreak", a mournful ballad about the painful breakup of a long-time relationship that one of Drew's friends experienced ("Ain't it strange how a heartbreak changes everything"). Then there's a musical reflection on Drew's distant past (though he admits in his introduction that he's changed history a bit). "Hallelujah" is an affectionate story-in-song of Drew's first attendance at the age of 14 at a rock concert. clearly a Christian rock concert. "Some say music can save your soul/Others say the Devil loves rock and roll/All that boy sees is the girl in the second row."

Drew and Nathan have been on stage for well over an hour but still the songs keep coming. The singer/songwriter prefaces "You'll Always Be My Girl" by recounting how he came to write the song the day before his final studio visit to finish 'Medicine'. It's another tender-hearted tribute to his much-loved Ellie. Although no Christian proselytizer, Drew's final two numbers are clearly suffused with spiritual hope ("You are a novel in a sea of magazines/You make me nervous, you make my heart beat/You are red in a sea of black and white/You are fire, you are dynamite"). After they are roared back for an encore the duo finish with "What Would I Do Without You". The words still echo in my mind as we begin the long drive back to Stoke-on-Trent. "You've got your sunshine, I've got rain clouds/You've got hope, I've got my doubts/Oh. what would I do without you?" What indeed?