Both Cross Rhythms radio listeners currently grooving to the mind-jarring sounds of "Morse Code" and followers of all things cool in the UK gospel hip-hop underground will know that Dublit is the chosen moniker of rapper Sammy G and producer Jimmy 'JJ' James. The partners in grime's album 'Plain An Simple' is one of the most exciting debuts of recent years and so when Sammy and Jimmy drove up from Birmingham to appear on Mike Rimmer's Rimmerama programme, I was on hand to catch their story.

Sammy G has been a fixture on the Birmingham gospel scene for many a long year and has played literally hundreds of gigs big and small. Recording-wise though, the rapper has been limited to one EP, 'Two Thousand Years And Still. . .' (2000). So, Mike Rimmer asked, how did Dublit come about? Responded Sammy, "Me and Jimmy been friends for years before music or anything else. Jimmy started producing, obviously I was rapping, you know, garage/grime and what not. We just started making tracks together and Jimmy would just build tracks completely around my vocals. And we both thought, it's as much his as it is mine, like we can't just say it's Sammy G's album. So it became a Dublit CD."

24 year old Sammy has been waiting to release a full length album for a long time. He commented, "It's like God's timing, man. I think there's a lot of things that weren't in place before which kind of have been put into place now. Before, it was a lot harder financially, studio time and paying producers, paying someone to mix, that type of thing. But [when we started working together], just rough things, we'd get a good sound out of it. Then we said, 'If we just got a decent mic and some decent equipment we could do an album just right here." Jimmy finished Sammy's sentence, ".in the bedroom."

Sammy continued the tale of the recording of 'Plain An Simple': "We just went halves on some equipment and got the things we needed. Jimmy's got a great ear for mixing and stuff, so we just got cracking on it. It's taken us about 18 months since then." 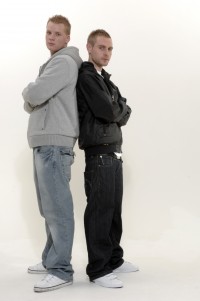 Jimmy and Sammy have known each other for eight years. Jimmy remembered, "I would have been about 12 years old and Sammy was about 16. He came into the youth club when that was running back then. We just got chatting. We didn't have a clue what was ahead of us and we just started off as a really strong friendship."

Having completed the recording of their gospel grime project the duo had to overcome another obstacle in getting the album manufactured. Said Sammy, "As you know pressing a few thousand CDs is an expensive game so just last summer, before all the summer festivals and not long after we'd first linked [up musically], we put out the first promo single, before we got the name Dublit. That was 'Jack Jones'. We charged about Â£3.00 for that. Eventually we'd saved enough money for the pressing of a full album."

Key to 'Plain An Simple''s appeal is the authentic street music vibes of the project. Said JJ, "I've never really made a lot of what I would say hip-hop beats, but with the grime beats you get a lot more opportunity to be creative, there's a lot more sort of grittiness to the music. It's experimenting with noises like you'd usually flick past on your samples and just mixing them in to see what it sounds like. It's a grittier sound than standard hip-hop and I love putting slight distortion on the bass, just to give it a grittier sound."

Behind the complex grime rhythms and surreal experimentation is a serious spiritual intent. Commented Sammy, "I think people need to understand that the Gospel message can be communicated in so many different ways and not just in a single genre of music. If it's done with excellence people will choose to listen to it and not feel they have to compromise. Like, 'Aww man, I got to stop listening to the secular, so I better listen in to this.' We want people to be able to say, 'Yeah man, this is done in a way that I want to listen to this and I'd rather listen to this instead of listening to secular.' But, whatever the style, it has to be done with excellence."

JJ was equally keen to emphasise the spiritual content of Dublit's album. "We're not looking for album sales or to pack out the launches with people who are already Christians. The whole approach for Dublit is to infiltrate the people who are at the moment into [secular] grime. Some people say that they're not influenced by the lyrics but are just into the music. But if they constantly listen to it they will take on board what the songs say. And what Sammy's raps are doing are pointing people to Jesus."

fist id like to say this is the message we need to send out to young people i listhen to all sorts of music as i go to a studio myself and i write and produce and rap , i always try to look for the posertive outlook on music after everythink that ive been thru also hatman & butcha thay are more gospel music and it is the way forward would like to wish all the gospel singers and musians my best ,