Tony Cummings spoke to seminal rappers Noel and Robbie Arthurton, otherwise known as the DYNAMIC TWINS about their years in hip-hop 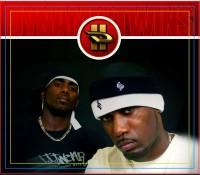 Tony: The Dynamic Twins really were pioneers of the whole Christian rap thing with groundbreaking albums like 'Word 2 The Wise' and 'No Room 2 Breathe'. Looking at the modern Christian rap scene are you pleased or disappointed with the way it's developed?

Yes we are very pleased to see others using their gifts to reach the lost.

Tony: You guys seemed to fall off the map after 'Above The Ground'. Did you retire or were you still gigging?

We never stop gigging. We hooked up with Rocket Ismail the wide receiver from the Dallas Cowboys and formed a group called 3 Sons Of Thunder and made a record. We started gigging under that name, and put DII/Dynamic Twins on the back burner. But now we're back on the set ready to spit fire, bring the Word like a two edged sword and speak life to the spiritually dead.

Tony: There are some very interesting themes on 'It's Not Done'. What primary messages are you trying to communicate to the Church and to the unchurched?

To the Church, the theme on this album comes from Acts 20: 24, "But none of these things move me neither count I my life dear unto myself, so that I might finish my course with joy, and the ministry which I received from the Lord Jesus, to testify the Gospel of the grace of God." Though it seems we were gone off the scene, we were ministering in other avenues. Our job here on earth as Christians is not done, and it will never be done until the Lord returns. When Jesus died on the cross and was buried, the people thought he was finished. All the miracles and this so-called talk of everlasting life was finished, all his work was done. But when he rose from the dead everyone knew it was not done, it was the beginning. To the unchurched; there is still hope. Jesus died, was buried and rose from the dead for you. He's coming back for you.

Tony: There still seems to be a huge lack of radio exposure for Christian hip-hop. Why do you think that is so?

Well if you think about it, who are the ones that financially support most Christian radio? It's the adults. Most Christian adults listen to contemporary music and most teens listen to rock or rap music. We all know that most teenagers are not going to send money to support Christian radio, they struggle to earn money in the first place. A few years ago I went to several Christian radio stations and asked the station manager, "Why don't you play rock and rap, or why did you stop playing rock and rap, or why don't you play more or rock and rap?" Their reply was, "Well, we just don't get enough support for it; or it just doesn't fit in our format." That is why most of our Christian teens and some adults still listen to secular radio, because they can't get their musical preference from Christian radio.