Cross Rhythms tracks down the artists who've been too quiet for too long. This issue we talk to RAYMOND & CO. 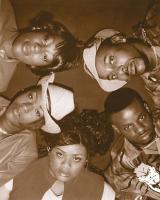 In November 2001 TV viewers all over the UK learnt that London-based gospel outfit Raymond & Co were the winners of GMTV's Gospel Challenges talent contest. The prize included a recording contract with Integrity Music (Europe). But then things went silent.

CR: So what's happened with this deal?

Raymond Dyer: I signed the deal with Integrity on my 30th birthday, which was November 22nd 2002. In the meantime, we'd actually been recording. We've been to America a few times and were actually showcasing some of the tracks over there. In November, the day after my birthday, we had a preview of the album showcased in London. That went really, really well. We felt that opened up a lot of doors. And now we're finishing up the last few tracks. And we've had some great news. After signing with Integrity, Integrity have signed a major distribution deal with Sony. So now Sony are going to be distributing the project into the mainstream! So that's what's happening.

CR: Where did you record the album?

RD: With Lindsay Campbell in a very small studio down in Camberwell. Lindsay Campbell's from Birmingham, he has a company called Big Man Productions. Lindsay's done some secular stuff as well as gospel and he's very, very good.

CR: "Playing Games" is one of the most popular tracks you recorded independently. Have you done a new version of that one?

RD: We played the song on the Bobby Jones TV show in America and record label heads and people in the industry keep asking what happened to the track and whether we're going to release it because they swear that it's a Number 1 hit so we're going to do a remix of "Playing Games". We're also doing a remix of "Fire". Again, the potential of that track is really great and the message is great. It's from the Scripture "Fire shot out of my bones." The hook is very catchy and people sing along with it very easily. So yeah, we're going to remix that as well.

CR: When will the album be coming out?

RD: April 2003. I don't know the date. The last time I spoke to Integrity, they were trying to do a simultaneous release in England and in America. Whether or not that will happen though...it's just talk at the moment. There's talk of a single as well. It might well be that the single will come out first, and then the album will drop over there, or it could be the single here first and then a general release both over there and here.

CR: What will the album be called?

RD: We're toying with ideas for a title, but we think it will be called 'No Limits'. In June 2002, we were really privileged to go to a church called Without Walls International Centre, which is pastored by Randy and Paula White - you may have seen them on the God Channel. She's a dynamic lady preacher and they've got a massive church in Tampa, Florida. They had us in to do the youth conference and the theme of the conference was The No Limits Youth Conference. So I wrote a theme song for the conference. It's stonking stuff! It gets good radio air play, like Choice FM and some other stations. It's doing quite well. So I think it'll be called 'No Limits'.

CR: So you've had a busy year?

RD: I think I've been to America three times this year! We've been to Europe twice and we've been doing lots of concerts. Same old things like radio shows - we've been very, very busy.

This Playing Games album is tremendous. The beats are good, the songs are infectious. Just one question, when's the next album?