Through the words of eight of those who attended, we tell some of what happened during 1991's CROSS RHYTHMS ROCK GOSPEL FESTIVAL. 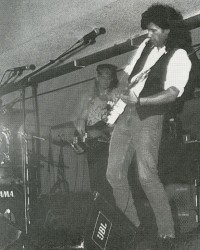 The facts about 1991's Cross Rhythms Rock Gospel Festival are simple enough to recount. Held at the Okehampton Showground, Devon, from July the 12th to the 14th, the Festival offered a main-stage music bill of (on Friday) Johnny Markin, Paul Poulton, Alwyn Wall, Sam Hill, The Electrics and lona.

On Saturday's bill was House Of God, Eden Burning, Marianne Derbyshire, Sat Solo, and lona. Among the artists in the smaller fringe tent were Medals, Ransom Decreed, Ascent, Azimuth Brainstorm, Plague Of Locusts and Asian. The seminar speakers included the Church Army's Steve Martin, Word (UK's) David Bruce and businessman Bruce Oliver. An attendance of two thousand people was needed to break even. But continuous rain showers throughout the weekend meant the attendance was only 1300. But bare facts don't tell the story of Cross Rhythms Rock Gospel. Through the words of eight of those who attended, and the photos of Lynette Quick, we tell some of what happened during that wet weekend of music, mud and ministry.

With the band I'm in, Medals, we drove down from London. Arriving at a wet hillside in Devon, getting wetter by the second, we sought out our venue. A white marquee shading to mud-brown at the bottom proved to be the culmination of our 300-odd mile journey. Inside things grew blacker. A generator inanimately mocked all attempts to power up. The monitor amplifier (through which the band hears itself) had blown up. One band had given up since their electronic keyboards only work with an amp.

We're not musicians for glory and this was a test of Medals' mettle. Rain spotted the car windows from a grey sky and we sat not even knowing when we would play. I prayed specifically for the technical problems. Our amen was echoed by the compere announcing our set 'in a couple of minutes".

We believe in the Holy Spirit and in His active participation in our lives. Sometimes Steve, our singer, or Dennis our drummer, become aware from the Spirit of needs and situations in the lives of people to whom we play. Such a thing happened now. There was a girl in the wet, trampled, grass-smelling tent who had a problem with her left ear. Who she was, where she came from, all her life were unknown to us; but from the Spirit of God. We asked her to come forward. Nothing happened. We finished our set with some encouragement from the crowd. Still she didn't come.

We packed our equipment and by now oblivious to the Dartmoor rain we stood outside the sodden tent. Thankfully, we'd had no technical problems and the lack of monitors had not been too difficult a problem. As we stood getting wetter, a girl approached us. She was the one, she said and she had an ear problem. We prayed with her there and then. In the power of the Spirit this child of God gently fell unconscious in the mud, rain falling on her face.

Two minutes later she was up and her ear was healed. Thank God. Muddy but whole.

It was a YOUTH Rock Gospel Festival, so as a 40-year-old mum I don't even know how I happened to be there. God, however, knew that I would be, so I tagged along with our Church youth group - which included my somewhat embarrassed 16-year old son.

Our family unit fell apart a year ago when my non-Christian husband left home, so I persuaded myself that, apart from a much-needed break, I could utilise my recently-founded photographic profession and take some 'action' shots of the bands -- most of whom I confess to never having heard of!

We arrived full of anticipation and expectancy - which was dampened only by the weather. By mid-evening we had pitched, unpacked and listened to some pretty amazing music. Among the bands who played in the Big Top were the London-based group 'Medals', 'Ransom Decreed' -- who became firm friends through the weekend, and many more very talented musicians. The evening was complete for me when 'lona' performed; they were excellent.

Despite problems with the sound system we knew it was going to be a great event; however, we had underestimated God's plans for the weekend. Saturday was a feast of music interspersed with seminars. God was mightily at work. People were being healed, some delivered of spirits, everyone was prayed with and many teenagers gave their hearts to Christ that night. I received healing from the Lord of past hurts. I prayed for a spirit of boldness and asked the Lord to reveal Himself to me in a new way.

10 am the following morning found a Big Top (with its sides rolled up) filled with about 500 Christians praising and worshipping Jesus in a way I had never experienced before. We were ONE BODY united in Christ Jesus -- it was wonderful! After what seemed like abut 10 minutes (it was actually almost two hours) God gave me a vision which will stay with me for the rest of my life - He didn't, however, give me human words to describe it! It was AWESOME!