Elan: Ladies of the valley

Making an impact on the British club scene are Welsh trio ELAN. They spoke to Tim Walker. 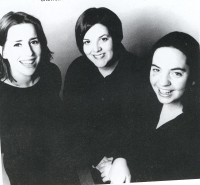 Although the word "elan" usually suggests concepts such as "style", "elegance" and "refinement", none of these, however appropriate, were foremost in the mind of three Christian female singer/songwriters in 1996, when they chose it as the ideal name for their newly-formed collective. "It's a very beautiful valley near Aberystwyth", explains Sheridan James, a Welsh-speaker from Cardiff and one-third of the group. "We were driving through there, thinking of names. We wanted to have something that reflected our personalities, the fact that we were three girls and stuff, so we started going through favourite books, movies, places. And I said, 'The Elan Valley is one of my favourite places', and then Emma said, 'Elan! How about that?'"

So elan (no capital letter, apparently) it was, and the last two years have taken the trio from Aberystwyth University Students' Union to the Big Top at Greenbelt '97, releasing an acclaimed CD mini-album and touring with a renowned Welsh folk duo along the way.

It all began when fellow drama students Emma Thirlwell, from Northampton, and Black Country-born Jo Hill, at Aberystwyth, discovered in early 1996 a shared love of writing and performing their own material. "You started harmonising on some of my songs," Emma confirms with Jo, "and then we started doing some of your songs, and we kind of learned to play guitar together." Before long, Sheridan, a post grad at the university, came into the picture, and in her own words, "it all fitted into place, really."

A university Battle Of The Bands provided the launch pad for the new group, still lacking a name. The first few gigs saw the trio play under a "really awful" name (which this writer failed to discover), before adopting the name elan.

The band's trademark sounds are clearly showcased on their two recordings to date; their early six-track demo, 'Live At Willy's'; and the more accomplished CD mini-album 'Return To New Street'. The latter was recorded at the studio of Huw and Tony Williams, an acclaimed duo on the British folk circuit, and the good will fostered during the sessions (Sheridan: "They were lovely to us") led the trio to enquire into supporting Huw and Tony on tour, to which the duo agreed. "We improved about a hundred times" is Sheridan's assessment of the experience, and the CD was released during the tour, garnering excellent reviews from this publication and others.

Elan draw their sound from many sources, but they major on guitars, glorious two- and three-part vocal harmonies and a distinctive use of percussion, including bodhran and djembe. Influences as diverse as the Indigo Girls, 60s vocal groups and Joni Mitchell are detectable, but elan's sound is definitely their own. And they want to extend it, with Emma learning bass guitar and Jo itching to try Hammond organ on the next album.

Meeting the group, one is struck by their enthusiasm and sense of humour, but most of all how close they are as a band and as friends ("like sisters", in their own words). All three are committed Christians and this feeds noticeably into their songs, although they are drawn more to secular gigs than to the church hall circuit. "People have sometimes asked us if we're Christians," Emma comments, "and that gives us a forum to be able to talk about it."

Elan are aiming to devote increasing time to gigging later in the year and are likely to appear at the summer's Christian festivals. For three women whose early ambitions stretched to 10 minutes in the Greenbelt Fringe bandstand, the future looks very bright indeed.

For more on Elan visit the Elan artist profile