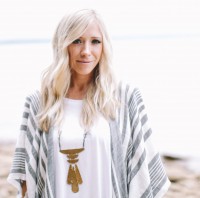 When Ellie Holcomb released her full-length album 'As Sure As The Sun' in 2014 it received major critical acclaim and resulted in Ellie being named Best New Artist at the 2014 GMA Dove Awards (although of course Ellie, daughter of top producer Brown Bannister and member of her husband's group Drew Holcomb & The Neighbors is hardly a "new" artist at all). Since Ellie's unexpected breakthrough into the CCM scene things have been very difficult for the pop and Americana singer/songwriter. She told one interviewer shortly before the release of her second full-length album 'Red Sea Road', "The past two years for our community have been heavy, full of suffering and loss. 'Red Sea Road' is a record full of songs about how I've seen God show up in the middle of all the pain." I spoke at length to Ellie about her life and music.

Tony: You've been slow to enter the world of CCM in which your father has been such a prominent figure.

Ellie: He's such an incredible dad. We had some really healthy boundaries; he encouraged all of us to think twice before we did music. He was able to paint a picture of the cost that there is with this job - travelling, the demands on your schedule. I swore that I would never be a musician; is that not hilarious? The Lord has a sense of humour! I vowed I am not going to marry a musician, and I'm definitely not going to be one.

Tony: You married a musician and ended up singing with him. You've done the whole nine yards.

Ellie: We've taken a journey together. It's been crazy.

Tony: During that time with The Neighbors, was breaking away from the mainstream to sing exclusively about God in the back of your mind?

Ellie: Drew is the one that encouraged me to share the music I was writing. I kept trying to write songs for our band. 'Oh my goodness, I'm so sorry, I accidentally wrote another one about the Lord!' That's what was coming out of me. I was memorising Scripture with a friend of mine suffering from depression, and we were finding God's Word was alive and changing us. I was writing music out of God's Word. It was Drew who said, 'You need to stop writing music for my band and just write what's coming out of you, what God is giving you. Be who you need to be and write that music.' I'm so grateful because I don't know that I would've been brave enough to do it on my own.

Tony: Did you make a bee-line for a big Christian record company? 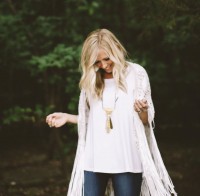 Ellie: We did a little Kickstarter campaign to help us not go into debt making the record. It was such a humbling thing because the support was overwhelming. I feel like I got to make a record with 1700 really close friends who were for me and literally supporting me financially. There were several labels that came to the table. 'Do you want to work with us?' I felt like an idiot because that's what people dream of, signing with a label and launching their career; but at the end of the day I did not feel at peace with that. I felt like I was making a dumb decision, except it's never dumb to walk where God is saying, 'Peace' - to listen to his voice leading you. We have stayed completely independent and have a lot of freedom to say no, which has been such a gift to me, to my family and to my kids, because I mainly say no. I get to be a little less busy; I'm so grateful for that.

Tony: You don't have a big record company behind you but you do have managers.

Ellie: Yeah, we have some incredible managers. My two managers are married, and they also manage my husband Drew. We had built this indie team - small in number but mighty. It's a sweet thing when you're stepping into what God is calling you to do. He has brought this incredible team around me, so I'm definitely not doing this alone.

Ellie: Before I even made this record I was on my face. Everybody asks you, 'What's next?' a month or two after you release your record. I say, 'I don't know. Whatever God wants me to do next is what's next.' I'm not even sure I'm making another record, because I'm not doing this unless he's telling me to do it. I just want to be right where he's leading, right where he's saying, 'Go.'

Tony: You've said a very brave thing before, that your first record had helped you in your battle with unbelief. Were there moments when you felt you couldn't go on writing songs?