Explode The TV: A London band whose sound is "a clang of heavenly angels" 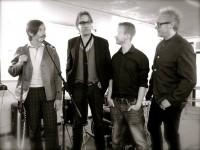 Undoubtedly one of the most intriguing bands to emerge onto the British scene is London's Explode The TV. Their 'Godbox' album debut has been getting radio play and praise from the critics. Explode The TV were formed in 2010 from the ashes of Zerostar, who played Greenbelt twice as well as the Christian and secular scene extensively. In addition to that, band member Andi Skipsey played with worship leader Noel Richards for a number of years and has done many live recordings with him, as well as with Matt Redman on Soul Survivor 'The Peoples Album'.

ETTV consist of Bentley Browning (vocals), Dr Guzman (guitar), Andi Skipsey (bass) and Chris Witherall (drums). Chris spoke about the band's peculiar name. "I watch a fair amount of TV (not sure if the other guys relate to that!), but I think that, in our culture, the TV has become a pinnacle of daily life. So for us as a band, it's a good metaphor for the messages that are thrown around in our culture about what it takes to be a successful, fulfilled person. As a band, we feel that people don't always take time to question these messages. Whether in secular culture or church culture, we can stress ourselves out trying to measure up to ideals that don't line up well with reality. We feel that it's so important to wake up to some of the subtly conveyed ideas that are communicated within our culture - and to be aware of what's being put across. We ought to ask a lot of questions and be willing to turn our backs on the things that don't line up with the truth."

Andi added, "It's a metaphor for exposing the lies, the darkness, questioning life and the messages put out by the media. It's hard thinking of a unique band name, as so many have been taken. There is only one Explode The TV!"

Bentley spoke about how his Christianity influences the band's music. He explained, "My faith informs everything I sing about. I am honest about the struggles therein and I find that exorcising pain and angst through lyrics is a God-given gift of which I am truly thankful for." Andi commented further, "His Spirit is within us. Wherever we go, whatever we say, whatever we do, we bring his light and that includes when we perform and write songs as Explode The TV. We don't have to be full on with evangelizing all the time, we can be the 'good news', we can be Jesus to people and we trust that in the songs and in the spirit of the music something of God comes through. The 'Godbox' is many things, but it can and should be God in us, an expression of him on this planet!"

The 'Godbox' album was recorded over a few months. Said Chris, "It felt as though some of the tracks really developed - and took on new life - once we got into the studio. Tracks like 'Cry For Attention' began to sound different during tracking. There were times when that was particularly obvious and I think we were all pleased with seeing those developments throughout the recording process. Apart from that, mucking around with Amigo (Andi's pet chihuahua) kept everyone sane towards the end of a long day."

The project was produced by Tom Aitkenhead. Andi was particularly impressed with his talents. "He was a joy to work with, showing real attention to detail and really 'got' what we are about. Some producers have a heavy hand, which some bands need. But Tom's focus and opinions worked for us as opposed to against us. The recording process was very smooth and easy apart from coming out after one session to find my car had disappeared: clamped and towed for parking with an out-of-date permit that Tom had given us! Not funny at the time, but all sorted in the end."

Andi spoke about the song "Driving Yourself". "It came out of an acoustic writing session at Jonathan's flat in Hammersmith. He came up with a very cool guitar riff and I put a picked bass part over that. Bentley found a great melody and a few lines. The next day we took it into the rehearsal studio and it came to life. We were in the middle of recording the album at the time and we all agreed, 'this has to go on the album'! We called Tom and told him the news; he could tell we were excited and was blown away when he heard the tune. The song is about letting go of control and allowing God to direct our lives as opposed to us trying to steer our own path, which often ends in a car crash!"

Bentley feels that "Pure Water" is a flagship song for 'Godbox'. "It has a video shot in a swimming pool! And it's a live favourite in the set. It got playlisted on Q Radio, which is awesome."

When asked to describe their sound Andi responded, "A firecracker exploding into melody of mind freeing loveliness to shatter the illusion breathed by the masses to a clang of heavenly angels with guitars, drums and buckets of attitude." Equally colourful was Bentley's suggestion that "Explode The TV sound a bit like a fairground ride on an indie pop rock merry go round with post-punk snorting horses!"

Explode The TV have already played some substantial gigs, like supporting KMFDM at O2 Academy Islington. Clearly, as more people get to hear the indie pop rock post-punk snorting horses sounds of 'Godbox' there will be many more to follow.