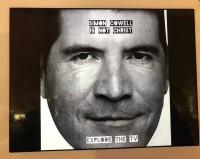 THE ECLECTIC London-based duo Explode The TV have released a new single and video, "Simon Cowell Is Not Christ". Explained the band's Andi Skips, "We wrote the song back in 2011 and did two versions, a standard version that featured a busy bass line and a pop version, with the synth riff. We decided to release the bass line version. . . We felt that the song still had some legs and relevance today and the pop version hadn't seen the light of day, so we thought we'd release it. Obviously Simon Cowell has never claimed to be Christ, (well at least I don't think that he has), but a newspaper claimed that his popularity was equalling that of Jesus Christ. Bentley was offended by this ridiculous claim and thought we should make a statement about it and about the plastic pop industry."