Tony Cummings reports on the recent changes within FAMILY FORCE 5

The band's drummer Teddy "Hollywood" Boldt has just announced on social media "After much prayer and consideration, I've decided to move on from Family Force 5. It's been an incredible four years and I am beyond thankful for all the amazing people I've met along the way. I can't wait to see what 2018 and beyond has in store for everyone! To all the ridiculously amazing people I've met on the road: thank you for taking me in for this great season of my life."

Boldt's exit makes him the third FF5 member to leave the band within the last year, with longtime members Derek Mount and Nathan Currin withdrawing within weeks of each other in May of 2017. Currently, the only remaining band members are founding brothers Jacob and Joshua Olds. A story on the New Release Today website has tried to evaluate the departures in the light of no announcements from the Olds brothers and the continuing delayed release of their sixth album. 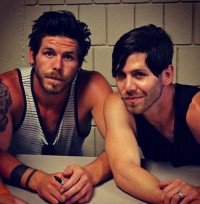 "No official announcement has been made yet as to the potential of total disbandment or the release of the long-awaited fifth studio album. However, the band did leave a cryptic hint as to their future. FF5 completely erased all of their former content on Instagram today, leaving in its place a simple eight second video. The video features a simple black screen with the FF5 logo in the center and seems to mimic a '90s style television broadcast, fading to static, a rainbow test screen, and then powering down altogether, indicating a lost signal. The most likely interpretation for commenting fans seems to be that the band is 'powering down' or going the way of the VHS tape. But fans should bear in mind that it's a similar Instagram strategy employed by artists like Taylor Swift before a relaunch, rebrand and new music. Will we see a rebranded version of FF5 with a new name but similar style? If so, we're hoping the brothers go with something like 'OldsCool'."