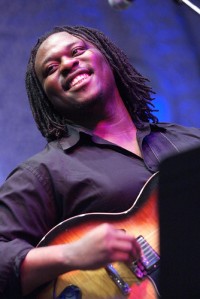 Femi Temowo is an acclaimed composer, producer, broadcaster and critically acclaimed jazz guitarist who has worked with such high profile artists as George Benson, Estelle and Soweto Kinch and was the musical director and band leader with Amy Winehouse. Now the Nigerian-born, London-based musician has released a stunning album, 'Orin Meta'. Loosely translated orin meta means three songs representing birth, life and death and the album deftly fuses contemporary jazz with the folk music tradition and song culture of the West African Yoruba. Femi spoke to Cross Rhythms about his life and music.

"I was born in a town called Akure. My father was stationed there as a soldier in the mid '70s, where he met my mother, who was the daughter of a market trade woman. I moved to Lagos as a baby to live with my grandmother, because my father was in the army. So I grew up in Lagos around family. I moved to Britain in 1986 when I was 10 years old."

For such a dazzlingly brilliant guitarist, Femi surprisingly didn't start playing guitar until he was 17 years old. "I started playing in a church my family was attending at the time. It was a direct result of being a little bit wayward, getting into trouble, and my mum thinking the best way to keep an eye on me, especially on a Saturday evening, was to take me along to the church choir practise, where I discovered a couple of other young guys playing the guitar. One of them started teaching me a few chords, and it evolved from there."

As Femi's musical skills developed he became particularly influenced by the giants of jazz. "Wes Montgomery was a massive, massive influence. I discovered George Benson first, but when I discovered Wes, I understood George Benson - the lineage between them. Obviously also a whole host of other instrumentalists from different eras. Ask 10 jazz musicians who are their influences, we'll probably all have the same answers. That music has such a strong wealth of history. There's plenty to dig into, people like Coltrane, Parker, Miles - all the big names. I was also very much into composers like Pat Metheney. I loved the way he could use music to paint pictures. In fact, I think I love him more as a composer than I do as a guitar player. I really respect that about him, because there aren't many guitar players over history that have been known for their compositional work in the way that Pat is known."

On completing his education Femi set out on the long and challenging road as a full time musician. He admitted it wasn't easy. "It took a few years of slogging away. Even now, it's not without its challenges, but it's a good few years of sacrificing, living in quite wanting circumstances from time to time, going without some things that some of my peers would have had, who have gone into different professions. I was going to do everything to make sure I could achieve that."

Eventually, in 2003, Femi got a music industry break. "One day I got a phone call from an agent that I'd been working with. He said that Amy Winehouse's management had put word out that they were looking for a new musical director, and that my name had been short-listed, because Amy came from a jazz background, but she was also going towards a more commercial, mainstream angle. Having my jazz background, and also having worked with quite a few mainstream artists, my name got thrown into the hat. I met with her in Camden. We discovered that we shared a lot of the same views about music, and a lot of the same passions about the kind of music we like to listen to. She decided she wanted me to be her music director, so we started from there."

Femi spoke about his years with Amy. "I learnt a lot about the industry, how certain things work. Musically, it was good because I got to express certain things - for instance, it was the first time I got to really get my teeth into a horn section, so I had an opportunity to express that part of what I love to do."

Femi was deeply saddened by Amy Winehouse's tragic death. "The time that I worked with her, I was quite close to her, we travelled a lot together, even when the rest of the band wasn't involved. We did the radio tours. The guy who was the music director prior to myself - an unofficial music director - was also a Christian. The two of us got together once and prayed for her. When it came about that I was going to be taking over, some people in the management office weren't sure how it was going to go down between me and him. Being that we were both Christians, we decided that we were going to handle it in a civilised and very mature way. I guess Amy had her own opinions about faith in general; coming from a Jewish family, it wasn't drastically new to her." 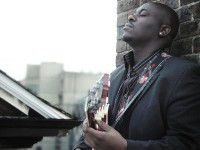 In 2006 Femi recorded his first album 'Quiet Storm'. The guitarist spoke about the project. "It was very different in the sense that it wasn't so conceptually led. I did it because, at the time, I felt like I had some things to get out. When I listen back to it, it feels like I'm clearing my throat. So the record can sometimes feel a bit sketchy, as it were - very eclectic. But all of those are good things."

Femi feels that dividing music into "Christian" and "non-Christian categories isn't helpful. "There's music made by Christians and music made by non-Christians: all of it is valid, and all of it can have different effects on people in different ways. I think that sometimes it's important to remember that music is a gift to all of mankind, so the moment we start to slice it and dice it and say, 'You can access this, but you can't, because you don't believe in this, you understand this,' we limit God's gift. Or even limit ourselves having access to music that would otherwise be influential to us, by throwing it away and saying, 'It's not Christian music, so I don't want to know'. So many different ways to look at it, but I'm of that belief that music is a gift to all of mankind - capture that music from wherever it comes from and make it palatable, do you best to make it as honest to what you've heard as you can."

When Femi began recording 'Orin Meta' he utilised many of the musicians he regularly gigs with. "People like Troy Miller, Grant Windsor, Jean Toussaint, Michael Olatuja - we gig together all the time in various different combinations - brought a lot to the album. But for me, the fundamental element of the record itself was the addition of talking-drummer, because without it it could just be construed to be another regular acoustic jazz record. The talking-drum was that secret weapon that brought the Yoruba-ness to everything else."

One of the many riveting tracks on the album is "Awon Asiwaju". Femi spoke about the hypnotic chanted vocals on the track. "It's a homage to the elders - not elders of anything specific, elders in general I have a profound respect for. Very entrenched in Yoruba culture is giving respect to the older generation. The chant on there says, 'The elders taught us and laid it down for us as a way to follow'."

Another fine track is "Felicia". Explained the guitarist, "Felicia is my birth-mother's name. She died a few months after I was born. I was born in September, she passed in January of the following year. That song was conceived the day my dad first showed me a photograph of her; for many years I didn't know what she looked like. I remember going home and deciding that the next melody I composed would be the one I would write for her."

Femi's favourite on the album is "Asiko Aye". He said, "It was the one composition that came to me all at once. When compositions come all at once, you always feel that you've been given a gift. That song feels like a gift to me, and I'm always very joyful when I share it with others. I didn't have to work so hard for it, like some of the other compositions."

since Feb 07 I have been engrossed with Amy Winehouse. I am 60 and hands down, Amy is my all-time favorite artist. In viewing videos I have noticed Femi, SWR3 Pop Festival 2004 is where he really sparkled and I took notice. I am elated with this article on Femi and looked forward to hearing Orin Meta as soon as I find it! Thanks again for the informative article.

Hey, did you ever find the album?