The Royal Priesthood: Positivity from the London gospel hip-hop underground

Although Britain's Christian record companies have been painfully slow to recognise the fact, there has been a veritable explosion of creativity in the UK gospel hip-hop underground. From the high profile Jahaziel recently walking off with a MOBO through to literally dozens of emcees and groups making with the rhymes on independent singles and EPs, the scene is flourishing, particularly in London. With all this frenetic activity and growing media interest let's hope that London's The Royal Priesthood get their share of the spotlight. Certainly they deserve to. Their latest album 'Village Nation' is a powerfully produced and eloquently messaged riposte to the negativity and hopelessness of many in our inner cities.

Currently The Royal Priesthood consist of Femi "Smooflow" Iloyi (MC and record producer) and his wife Roucheon (singer and writer). Smooflow was born in London and spent part of his teenage years in Nigeria. He told Cross Rhythms, "I have always been passionate about music, studied business and have always known this was something I'd pursue. I had a love for production and was always able to put the right sounds together so it was a natural progression as we grew into what Royal Priesthood is now. My journey to God started by meeting some hip-hop artists who were out on the streets of South London sharing the Gospel."

The Royal Priesthood were originally a crew of four with Silas (Smooflow's brother-in-law) and Kadesh. Commented Smooflow, "Kadesh was a gifted artist we met some years ago and we collaborated on the very first album both production wise and he was present in the group. It was not something permanent and he continues to establish himself as an artist. Silas is my brother-in-law so we will always be involved in each other's projects, gig together and support each other on our various endeavours."

In the early years of this decade The Royal Priesthood released a stream of independent projects, 'Time Waits For No One', 'Overcomers' (single), 'Thugs To Disciples', 'True Sciences' and 'Come See My World'. By the time the group put out the 'Built To Last' album in 2005 The Royal Priesthood were big hitters in the London underground and were officially a trio. It was a powerful release. Commented the Cross Rhythms reviewer, "This offering oozes perfection. In-house production on the beats comes courtesy of Smooflow, deftly mixing chunky horns with growling basslines. On top of this are the vocals, interlacing seamlessly with those tasty rhythms. . . a strong contender for UK hip-hop album of the year." 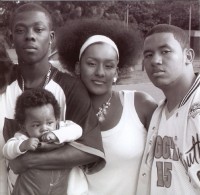 'Built To Last' contains two versions of an anti-gun crime song, "Stop The Violence". Said Smooflow, "A couple of years ago we spent some time addressing gun crime as we had lost a friend to it. It's not so much a part of our work but we felt it necessary in that time to speak up and try to be a part of the solution. We generally focus on positive issues that uplift people and highlight good lifestyle."

Now The Royal Priesthood have delivered another explosive album with 'Village Nation'. Smooflow pinpointed a couple of his favourite tracks. "'Freedom' is a heartfelt anthem of hope and empowerment. It came from our hope to see political and social change. Another track which our fans are relating to is 'Beautiful Woman'. That was inspired by the many women we have heard from who have suffered pain in some way and we just wanted to reach out and encourage them that there is no circumstance that God cannot reach."

As if Smooflow doesn't have enough on his plate, he has also taken a big step into the world of film. He explained, "Broken Silence is a film I wrote, produced, filmed and played a role in. It tells the story of three individuals who are faced with some of the challenges that our youth face. It's a documentary/drama as it is reality based as well as fictional. It is up for an MTV Base Award."

Cross Rhythms finished its interview by asking Smooflow what motivates the group? "Each of our recordings has been inspired by our lifestyle and issues around us that affect humanity. We have been blessed to have a faithful following and it's always been crucial for us to stay productive and give people something new and inspirational. We hope to stay in tune with the heartbeat of the people and establish our brand."

i love listening to your music, it comforts, calms and inspires...it is truly uplifting...thank you! wish you all the best with your work and visions and keep your spirit nurtured! :)