Figure Four: The hardcore band out of Winnipeg, Canada 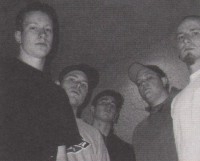 Amy: Could you give us a short biography?

Andrew: We started in January of 1998. We were all kids in the local hardcore scene and we wanted to start a hardcore band. There was a lack of good bands where we were from. We started playing A LOT in our area and did some out of town shows. We also put out a demo in '98. In '99 Jason from Facedown Records saw us and wanted to put out a record with us. We were more than happy to be on Facedown. So we released our first full length 'No Weapon Formed Against Us' in January of 2000. Right after that we started touring heavily across North America. We released this second full length in May of 2001 on Facedown and Kingfisher/Century Media in Europe. Now we are touring full time. There have been some member changes in the band since we started due to people getting married or going to school. The current lineup is me (vocals), Mike Peters (drums), Jeremy Hiebert (guitar), Jason Bailey (bass) and the newest addition, Melinda Dong (guitar).

Amy: Where did the title track of your new album, 'When It's All Said and Done', come from?

Andrew: Basically the title of the album (and the subject matter of the song) refers to our lives. Looking back on life when it's all over with or without regrets. It's a call to living each day to the fullest. We're always going to face temptation, deception and opposition in our lives and it's up to us to make the right choices because often times we dont have second chances.

Amy: How do you feel this second album has progressed from the first?

Andrew: I think the songwriting has progressed in a major way. The song structures are just a whole lot better, the music is heavier and the lyric writing is also a lot better. The lyrics I wrote for "When Its All..." mean a lot to me. They deal with relationships and I mean the relationships I have with Jesus, and my friends, also broken friendships I've seen recently, also how the enemy (Satan) is always trying to bring us down, and the power of our words. I like my vocals a lot better on this new record as well.

Amy: You seem to be touring a lot.

Andrew: Yes, we are touring full time and it's awesome to see God work in our lives as we trust in him daily on the road. It's so awesome getting emails or talking to people whose lives have been impacted because of our music and message. That totally helps us to keep doing this. We've had times when we were struggling financially and have a van break down on the side of the road, and God always pulls through and we always get by. We just have to always trust in him. One event that sticks in my head was back in March of 2001. We were driving home to Canada from California and it was really cold out, the roads were very icy. At three in the morning we hit ice and our van totally flipped over. Everyone was sleeping except the driver. The miracle is we were all safe and the worst that happened is I got a bump on my head. That just reminded me that we're in the palm of God's hand and he has us here for a reason. We should have all been dead or wounded badly after that, but he is so awesome and he kept us safe. So we just have to trust in him.

The opinions expressed in this article are not necessarily those held by Cross Rhythms. Any expressed views were accurate at the time of publishing but may or may not reflect the views of the individuals concerned at a later date.
About Amy Coonagh
Amy Coonagh lives in Winchester and is a hard music fan.