Mike Rimmer met up with the ex-Sonicflood man LINCOLN BREWSTER in Nashville.

The album 'Amazed' is Lincoln Brewster's third release and ever since his debut I have made a point of trying to hook up with him each year when I visit Nashville for Gospel Music Week. Lincoln was one of the first people to be signed to the label and he remembers, "There wasn't really a label, it was more of a name and a concept! It's been neat to see it grow and see what God is doing. I'd heard a story that Chris Thomason, from Integrity, went to a Delirious? concert a few years ago and Martin called him out at the back of the room and I don't know if he knew who he was but he just said, 'God's telling me you're looking for a new sound and he says you're going to find it!' Chris has been one of those people who, in the hardest times and really one of the darkest times in my life when they signed me, I was in his office and almost tried to talk myself out of a deal. He just said, 'You know what? I've been there and God has told us that you're going to be a part of this family and we're committed to you!' I'm going, 'This has to be a God thing!' So, it's an honour and it's a privilege to get to do this."

Lincoln continues to reflect on Vertical Music as he observes, "I think now they are really taking their mission statement and running with it, in a BIG way! I think with groups like Rock'n'Roll Worship Circus, I mean, I had never seen them before this week and I was floored.I just was blown away! They've taken another step on pushing the boundaries of modern worship. Nobody is doing what those guys are doing that I've ever seen! I think they're great."

If you haven't yet discovered his music, Lincoln Brewster makes guitar driven worship and the guitar part of it all is very important to him. "Absolutely!" he affirms, "there's a lot of guitar. There's even more on the new record. I just reconcile with that being one of the ways that I express myself.on the guitar!" And before you wonder, Brewster has certainly got the chops. As a sideman for Journey's Steve Perry he's racked up the touring miles but discovered the emptiness of being an axe hero. "I was with Steve for about three and a half years." He remembers, "We did some writing, made a record and toured. It was a lot of fun. Perry's stuff was right up my alley because it was stuff that I'd grown up on. A lot of guitar solos!"

The 'Amazed' album ranges from the mighty powerful rock sound of "Everybody Praise The Lord" (inspired astonishingly by a song Lincoln's mum wrote in the '70s called "Everybody Plays Guitar") to the rather audacious cover version of Delirious?'s "What A Friend I've Found". "I never even thought about that being audacious .now I'm nervous!" He considers for a second and then explains, "You know what? I just love the song. We obviously did it a lot different with the loops but you're right! To ever cover a Delirious? song! That's the interesting thing about covering. I didn't do it because I thought I could do a better version of it. I thought it would be nice to have a different version. Who knows.people may love it or hate it! But it was innocently done and I just wanted to sing a song I love. I have HUGE respect for Delirious? It's funny, I told Martin last night that I recorded it and I couldn't tell whether he thought that was a good thing or not! He's hard to figure!" 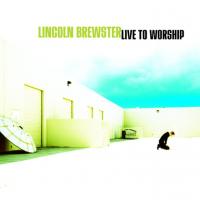 Lincoln sums up his approach to worship by saying, "I'm a big fan of Psalm 51. I like it because it is a great picture of being very real and genuine before God. With not being raised in church I got sick of it because it's so phoney sometimes. It's stuff that we make up and ultimately it's religion. If you look at it in Jesus' day, the people that he was the hardest on were the people who lived the most right on the outside.which were the Pharisees. They were the religious people of the day. The sinners and the lost flocked to Jesus! And in our day, for the most part, lots of people run from Christians like we're the plague! Just like they did from the Pharisees."

He continues, "I guess one of the things is that when I get into a worship experience with God, I want to be genuine. I know that lost people understand that and they're attracted to that. Above all else, they just want something that's genuine and not churchy or phoney and not ultimately religious. So the worship's got a different sound and all that but if I don't get out there and bare my heart and let them know who I am, then I'm just a flawed man and this is what God has called me to do. What's the point of all that anyway? So, I guess that's one of my biggest challenges to people. We have a time in the night where we play a song and say, 'You know, don't read the PowerPoint, just search your heart during this song. Ask God to show you who you are. He already knows but he wants you to know and he wants you to start accepting that and approaching him for who you are right now. Let him do the changing.' That's a big thing for me that there should be no more phoniness! Let's be genuine Christians. If you're having a crummy day, when somebody goes, 'How ya doin' brother?' then go, 'Well, I'm having a crummy day!' rather than 'I'm fine!'"