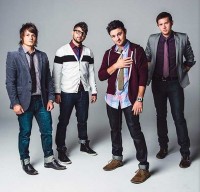 Last month Authentic Media released in the UK a CD by a new American band. Nothing particularly unusual about that, you may think. But as it turns out South Georgia's Finding Favour are a far from ordinary outfit. CCM star Toby McKeehan spoke about the band's first single, the emotionally powerful "Slip On By". McKeehan said, "Once in awhile you hear a special song that immediately takes you somewhere. It causes you to think and feel. And without preaching at you, it reminds you of the things that really matter. 'Slip On By' by Finding Favour is one of those songs. It grabbed my heart and stirred some emotion in me that made me want to live differently."

Finding Favour consist of Blake Neesmith (lead singer), Dustin Daniels (bass, guitar), Josh Duckworth (drums) and Allen Dukes (guitar). Josh Duckworth spoke to JesusFreakHideout.com about the band's origins. "Blake and Allen grew up together in Georgia. They played camps and events at the time with other guys. Dustin grew up in Chile, South America as a missionary kid and moved back to Georgia. I'm originally from Texas and was the last member to join a little over a year ago through mutual contacts we had from Nashville."

Josh recounted how the group had unexpectedly made contact with the head of Gotee Records, Toby McKeehan, aka TobyMac. "Blake was in a writing session with producer Chris Stevens. They were working on what's now our first radio single, 'Slip On By'. He had no idea that on that day TobyMac would be dropping by (Chris is Toby's producer as well). Toby walks in to the studio and, after chatting for a bit, he says he wants to hear what they've been working on. Blake was hesitant - I mean it's TobyMac! Chris then played the song for Toby and said he was instantly moved by it. He then looks at Blake and says, 'I want to sign you guys to Gotee'."

Josh said the band loved every minute which went into the recording process of their self-titled EP. "We worked with three of the most talented producers in the industry [Chris Stevens, Dustin Burnett, Rob Hawkins]. We'd go in and talk about the direction of the song and how we wanted it portrayed, starting with tracking drums and bass and then laying the rest on top. Those guys made it easy for us!"

The Lord is continuing to use the song "Slip On By" to impact people. Blake NeeSmith told NewReleaseTuesday about one particular incident. "We received a message from a guy who told us that he and his wife were at the point of ending their marriage. He packed up his things in his truck and drove off not caring if he saw his wife or his kids again. He took off, and he was so numb he decided to listen to music while he was driving away from his family. He turned on the radio, and our song was playing. He said after the song finished, he turned his truck around and drove home. He decided to start fighting for his family. He started fighting for his wife and his kids. I sat back and said, 'Wow God, you really speak through songs.' I'm honoured and it is my pleasure to serve God in that way."