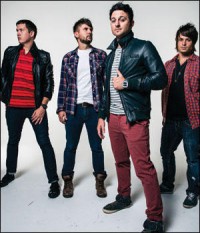 THE NASHVILLE-based band Finding Favour, whose 2015 album 'Reborn' reached number two on the Billboard Christian albums chart, will be releasing 'Farewell Fear' on 25th August through Gotee Records. Speaking about the album's theme Finding Favour's Blake NeeSmith said, "We're all in our 30s - most of us have wives and kids - and there's fear involved with that. We wanted to discuss honest stuff in these songs. Early on in this album's writing process, the statement we wanted to make became clear to us: 'Lord, we trust you and know you have plans for us; so we don't need to live in fear.'" The album was produced by Bryan Fowler, Jordan Sapp, Dave Lubben and Casey Brown.