Flying in to the UK in June for a hastily arranged tour, the supremely gifted trumpet player, FLETCH WILEY, spoke to Alan Smith. 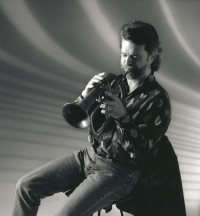 When the trumpets sounded, the people shouted, and at the sound of the trumpet, when the people gave a loud shout, the wall collapsed.' Joshua 6:20.

Look out for falling masonry folks. Fletch is coming to the UK. Not that a visit to the UK is a new experience for the superlative Fletch Wiley. Since 1984, when Fletch first toured with New Zealand's Scripture In Song pioneers David and Dale Garratt, Fletch has been popping in, often incognito and low profile, for tours, conferences and ministry sessions.

For most Christians, prophetic instrumental music is virtually unheard and unheard of. For those who have witnessed it, however, it has revealed much of what God was about in the days of Joshua. The ingredients that will demolish strongholds through the playing of instruments are faith and that priests do the blowing.

Fletch won't be quite seven in number - Midlands drummer Carl McGregor will be putting a trio together to support Fletch this time round - but the brethren who will be in prayer will certainly be believing on God for His miraculous power to demolish strongholds that have stood against Him for far too long. Three years ago, at a church in Coventry, a physically flagging Fletch (alliteration not intended) blew the flugel horn then the flute and finally the trumpet in the Name of the Lord. A constant stream of newborn Christians came forward and others who were much older in the faith were healed, built up and ministered to by David Carr and others. This was part of a 'God's Country' tour, where ground was claimed back for God.

This June it will be different. Not for the sake of being different, but every year Fletch has agreed to visit the peculiar Brits, the flavour and message he has brought in the Name of Jesus has never been quite the same from one year to the next. Last year it was only while dozing in the skies somewhere over the sea that the Lord gave Fletch a message to bring, a tune to blow and the power and authority to do both.

Now living in Cypress, Texas, with wife Kathryn and their three children, it was Seattle that nurtured master Wiley and it was at the age of 10 that he got his first trumpet. Fletch still remembers the day vividly, "...everything changed. There was something magical about the trumpet; the way it shined, the sound, maybe the fact that I could play louder than anyone else!... There was a purity in music that I had not encountered in anything else in life, an ability to communicate directly, without words, and yet have more impact than any verbal language could ever have. This stuff was important."

It was this important encounter that the Lord had impressed on the developing Wiley that would have to wait some time yet before it glorified Him.

The teenage school years brought the kind of experience most musicians encounter; the school group prophetically named the Bishops. Actually, the Bishops churned out James Brown covers and a lead singer that pranced and danced in clerical robes! But it was a start and Fletch was getting his chops together. He listened avidly to the jazz heavyweights of the day. Donald Byrd and Doc Severinson influenced Fletch the most during this period. "One was a terrific jazz player, and the other a great big-band and classical player, which is sort of where I still find myself, loving both the expression of jazz and the power and precision of classical music," explains Fletch.

It was after high school that he made the move to Texas. A little backwater university was the place where Fletch honed and perfected his craft. It was also the place where he experimented with drugs. There seemed to be a kind of competition on the campus - who could find 'cool' first. It was actually a religion in its own right, students trying to outdo one another in degrees of coolness. (Coolality? Coolitude?) Fortunately 'cool' didn't satisfy this future Christian, but an encounter with the Living God was still a while off.

He found that mixing with the future big names in music was a very humbling experience. The Blues Brothers Band together with Lyle Mays and Sal Marquez were just some of the names Fletch was playing among as they collectively developed their skills and ideas. It was at this point that he realised he would either 'have to get serious or quit'. He got serious with his music but was equally serious about his drug addiction. At the time Kathryn gave birth to their first child, Gabriel, she was suggesting strongly to her drug dependent husband that they should look at the spiritual dimension in their lives. Fletch's immediate response was to agree absolutely. He then proceeded to climb a tree to discover the meaning of life.

Conversion was looming large, however. He was playing with a superb bunch of musicians in Oklahoma and it was at this time that Fletch had an urge to read the Bible. He didn't understand any of it and continued in his established drug-orientated life. But a week later these same musicians that he had been playing with asked him outright if he wanted to give his life to Jesus as they had done. The drummer was a 28 stone preacher and, to put it mildly, Fletch found the 'confrontation' a bit heavy. As the evening wore on, though, he began to notice that these guys were different and could see that their values didn't correspond to the worlds. It was four in the morning when the Lord finally overpowered His adopted son and Fletch became a child of God.

"I knelt with them and accepted Jesus as my Saviour. Even though I had no idea what I was actually doing, I knew in my heart that this was the thing I had to do and I was not disappointed. I not only sensed a power beyond my own, but for the first time in five years I had no urge to use drugs. Not only was the desire gone, but the very thought of using them was repugnant to me."

God moved quickly. Very soon Kathryn gave her life to the Lord when Gabriel was just six weeks old and Fletch immediately reformed the band with his new brothers, Bill Maxwell, Harlan Rogers and Hadley Hockensmith. What had been a successful jazz outfit under the name Koinonia suddenly became Sonlight with a new direction, new horizon and a new faith.

It was 1971 that saw the encounter between Sonlight and a real hip dude by the name of Andrae Crouch. Andrae was wrenching black gospel into the Age Of Soul bringing in multi-track recording and funky rhythms lifted straight from Detroit and LA soul to the old, old story and finding in the process a white Jesus People audience for whom Andrae Crouch And The Disciples had more to say than Motown. Sonlight became the instrumental muscle to put alongside the amazing vocal armoury of Andrae Crouch, Sandra Crouch, Danniebelle Hall, and Bili Thedford and suddenly the Disciples were a multi-racial group and Fletch was pitched headlong into Christian ministry. The touring was demanding on Fletch as well as on his new and growing family, but God honoured the Wiley family through all the times of separation and hardships. The Disciples, as any Christian music buff will tell you, were used greatly for reaching out to people the world over, telling the Gospel message in a dynamic and vibrant way.

Eventually, Fletch felt that he should make the most of his talents and decided that it was time to put his innate skill as a writer, arranger and producer to good work. His first works in this new arena were a series of records for kids. About 20 productions enjoyed various degrees of success and they included The Music Machine', 'Bullfrogs And Butterflies' and 'Lullabies And Nursery Rhymes'.

There followed a series of his own records for Star Song: 'Ballade', 'Spirit Of Elijah', 'Nightwatch' (surprisingly reissued by BBC Records a year or so back) and The Art Of Praise'. It was during this period that Fletch began to discover that in the Bible music was meant to speak God's Word and to be prophetic. Passages from 1 Samuel 10 and 16, 1 Kings 3:15 and 2 Chronicles 20 began to set him on fire with the desire to kindle the spirits of men with the fire of God through prophetic music. "I began to see that a prophetic music ministry would bring freedom physically and spiritually to people. As I have begun to move out in this work I've seen a great deal of fruit."

His most current album, 'Urban Reel', represents the culmination of all that God has shown him to date. A record that is not designed to be a commercial success. "This record stands or falls with the vision that God has given me; that instrumental music not only has validity but, by its abstract nature, can pierce the very heart of man with its beauty and power," commented Fletch.

Those who are encouraging Fletch to visit Britain again this June are fully expecting our omnipotent God to do just that and more besides.

The opinions expressed in this article are not necessarily those held by Cross Rhythms. Any expressed views were accurate at the time of publishing but may or may not reflect the views of the individuals concerned at a later date.
About Alan Smith
Alan Smith lives in Knowle and is a regular reviewer for Cross Rhythms.