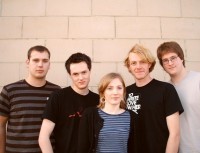 Encounter number one: It's 2006. A group are playing at Yeovil's Nth Fest. Their sound is riveting; silky smooth harmonies intertwined with spiralling guitar riffs in a hazy semi-acoustic shimmer. The band are called The Yearning.

Encounter number two: It's 2008. A group are playing at the Cross Rhythms radio studios for the Rimmerama programme. Their sound is riveting; silky smooth harmonies intertwined with spiralling guitar riffs in a hazy acoustic shimmer. The band are called Flight School.

Flight School are a band with a complex history as well as a compelling sound. Guitarist, bass player and keyboards man Daniel Hoyes explained how the group began. "We were a youth worship band called Side Project at a church in Grimsby which was just on the edge of a fairly rough estate, and sort of ministered to them. We went off to uni, but I suppose you could say the band originated in Grimsby."

By 2005 the band had become The Yearning and had settled on a line up of Ed Priestnall (vocals, guitar), Jennifer Papps (vocals, guitar), Daniel Hoyes (guitar, keyboards), Joe Hoyes (bass) and Don Gallant (drums). In the words of their original press release, "In the fading summer of 2005, two weeks of intense recording were undertaken in a small bedroom where sketches were formed on an old computer. The fruition of this was the 'Afterthought EP', a six-track CD freely available to download from the band's website." 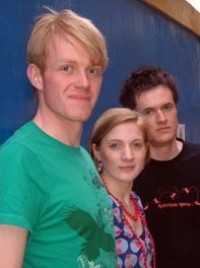 The Yearning's EP got highly enthusiastic reviews while, as they showed at Nth Fest, they could deliver live too. But the call of careers meant that by 2008 the band had shrunk to a trio - Ed, Jennifer and Daniel - and had arrived at a new name. Explained Ed, "Our original drummer Dan got married, and Joe went to do other things. So we had a slightly new direction and we were all in new locations, so it just felt right to have a new name." Ed is currently training as a commercial pilot in Cranfield. It was Dan's flatmate who came up with the idea of calling the new line up Flight School. Said Ed ruefully, "Initially I was quite adamant against it being Flight School, because it is very weird telling my course mates the band is called Flight School."

Earlier this year, the new name, new line up trio recorded and released an independent EP, 'Fragile'. On the Rimmerama programme Ed was asked about one of the CD's outstanding tracks, the opener "Collateral". "It started off as most songs do, with just one song idea but then expanded because I wrote it over the course of about three months. It started off about a girl and a relationship, and one that didn't seem to be going anywhere, and then progressed from that into thinking about all the dreams I had. It talks about the potential that we all have, that often the easiest way isn't the best and won't fulfil our potential."

Another of 'Fragile''s haunting songs is the title track, which is a bit of a precursor to "Collateral". "'Collateral' is about moving forward with your potential, with your dreams. I wrote 'Fragile' during a boring period of revision for uni exams. I was in quite an isolated place, quite lonely when I wrote this song. There's a line in the bridge which says, 'We're desperate for the sound of something more coming our way.' And that's a reference to what Paul talks about in Romans, he talks about the earth groaning in expectation for Jesus coming again. Sometimes I feel this expectation for something more that stuff on earth can't fulfil. And I notice that a bit more when times are rough."

So far, live appearances of Flight School are few and far between though they did play at well received set at London's Camden during the Pentecost Festival. We can but hope that the future will see more gigs at further recordings from this strikingly fresh trio.

Great band. People have loved them at both Nth Fest in Yeovil when they were The Yearning and at the Nth Fest we did at the Dublin Castle in Camden last year as Flight School. They just have class in every area. I strongly recommend them to all.

Ed Priestnall was a leader at my youth group in Derby, The Event. I believe he's also going out with my mentor =D it just made me laugh when i saw the picture!! I was thinking "I'm sure I've seen him before..." haha