Andy Long spoke to FLIK at the Greenbelt fest. 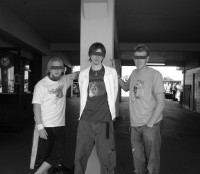 Andy: How did Flik come together?

(Steve Williams, guitar, vocals) We all go to the same church and we were messing around with a band before this. When Jim came along that's when Flik got started and we got really serious about it, that was about two or three years ago.
(Jim Wilkinson, drums) We decided to get involved with the manager Steve Davies, not just for band management but also as a spiritual manager because it's not really about the music, it's the message. If the band takes off and God does bless us, it's not worth anything if we end up backsliding.

Andy: What are the musical influences behind the band?

(Matt East, bass) The music we listen to is no reflection on the sound that we get. I listen to a variety of stuff and none of it really sounds like us. I think we've been able to find our own sound.
(Jim) There are personal tastes in music but there's never been one base. I hate some of the stuff that Steve listens to and Matt listens to the cheesiest stuff in the world, man! I'm more into Sting and dc Talk.
(Steve) There are probably a lot of influences, but there's only one inspiration. The lyrics don't really come from me, it's kind of a God thing, you know? Musically it just kind of comes together.

Andy: You have emphasised the importance of the message in your music, so what exactly is that message, in a nutshell?

(Steve) The message is, quite simply, that we serve an awesome God. More awesome than a lot of people, even myself at times, give him credit for. This awesome, creator God loves us as we are. The presence of God is something I don't really understand but I'm desperate to experience it. You hear stories of revival around the world and I really want to be a part of that. We just want to glorify God, it's never been about the band. We're not trying to freak people out, just challenge them to think. The love of God is there for everyone.

Andy: How successful has that been for you, in terms of getting the message over?

(Matt) It's been surprising really. We've played a few secular gigs and people do actually listen to what you're saying and respect that you've got a relationship that you're taking out there.
(Jim) There's a lot of deceit out there. When God created music and then the enemy took away the respect and love of God. Everybody's heard of Jesus but they don't really know who he is.

Andy: Tell me about your new EP 'Simple'.

(Steve) We've done a couple of promos for the media before now, but we decided to get together with a producer called Mike Parks. He's never really dipped his toe into the scary world of rock before and we were his guinea pigs. We recorded it down in Weston and it's come together nicely. We're constantly writing stuff, it never stops, but there are four loud tracks on there that really highlight what we're about. Lyrically strong, delivering the message. There's an acoustic one on there as well, because we've done some schools work and we always cut it back to an acoustic occasionally just to get that different slant on things.

For more on Flik visit the Flik artist profile