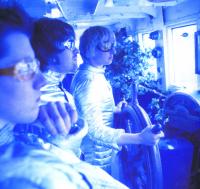 Back in the '90s Fono were one of the biggest bands on the UK Christian scene. Formed by ex- Split Level man Del Currie as Seven, the band leapt from independent release obscurity when they won a competition to open for Bon Jovi at a Milton Keynes gig. By 1998 they'd changed their name to Fono and signed a deal with US Christian label Reunion who financed the album 'Goes Around Comes Around'. Unfortunately, Reunion didn't like the end result and refused to release it Stateside though it did get a UK release through Word. A remix saw 'Goes Around Comes Around released in the States (through KMG/Big Deal) and American Christian radio hits ("Drift Away" and "Collide") and an arena tour with the Goo Goo Dolls saw the band climbing the heights.

Then in 2000 Del Currie announced Fono were relocating to the USA. As it turned out, things were far from easy for the band. "The label went bankrupt and it took a two-year law suit to get out of deal," explained Del. "Eventually we got free, toured with Goo Goo Dolls and Third Eye Blind last summer. We live in San Diego, California now. We have our own studio here on a mountainside over looking a canyon. We have a new guitarist called Soren Engen and a chick bass player (sorry for the non PC term) called Cindy Milliman. We're gigging pretty hard right now and getting ready for a national radio campaign."

I asked Del whether it wasn't about time for a new record? "Certainly is! We have an album 'Vinyl Life' finished though we're going to put out an EP first just to let everyone know we're about again. The record was done by Alan Sanderson who has worked with the Rolling Stones, Weezer and Green Day to name a few. It sounds great, we've certainly moved on in the past few years but the guts of the Fono sound is still there."

I asked Del how he was finding like in the USA? We live surrounded by beautiful palm trees, golden beaches, incredible mountain landscapes and all year round sunshine, but you can't get a good curry for love or money! If anyone wants to ship me over a chicken phal, special fried rice, keema nan and bombay potatoes I'll be willing to pay some serious dollars!"

For more on Fono visit the Fono artist profile