For King & Country: Burn The Boats album that conveys Joy but eschews propaganda 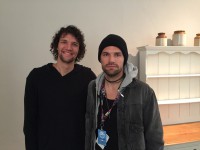 Anyone who witnessed their dazzling stage act at the Big Church Day Out or has been enjoying their latest smash hit single "Joy" will have no doubt that For King & Country are on an upward trajectory that happens to only a few very talented and very blessed acts. As well as "Joy" currently on the top spot on the Cross Rhythms chart, the station has been getting a positive audience response to the duo's surprise recording of the John Newton hymn "Amazing Grace" with their sister Rebecca St James, which appeared on the 'My Utmost For His Highest' various artists album.

Why surprising? Well, when Joel and Luke Smallbone first launched as For King & Country in 2011 there was no mention of Rebecca at all on their first biography, the duo having made the bold decision not to milk the publicity that their connection with a multi-Dove Award winner would have brought them. "That's all changed now," said Joel. "It's now been six years into it and it's been really great to be able to openly celebrate Rebecca as an established band. We had Rebecca come out on our Christmas tour last year. We went on a cruise through Alaska together. She's not really sung a lot, she's focussed on being a mum and a wife, an actress and author. I think at the beginning of our career, it's very fair to say that without Rebecca and her music, our journey would have been very different."

Joel continued, "We were Rebecca's road crew, we were the background vocalists, we were the lighting guys and so we got to see first-hand the impact of music and we got to see how a live show is presented. So when it came time to step into music on our own, at that point it actually felt almost cheap. On her behalf it would be more honouring to pave our own trail and then if, God willing, something sort of caught on be able to come back around and say 'well, this is it'. We were never too secretive about it, but we did make a decision that it was best on the merit of the band to let the recordings and songs speak, to let the heart speak and not try and use this as our ace up our sleeve. It just felt odd as a sibling."

For King & Country have indeed achieved a great deal on their own merit. As one publicist wrote, "Soaring melodies, driving rhythms, theatrical instrumentation and personal themes are the heartbeat of two-time Grammy winners For King & Country." The success the group's intoxicating mix of theatric, retro-tinged pop rock has brought them has been phenomenal. Their 'Run Wild. Live Free. Love Strong' album has been certified Gold, as have two singles, "The Proof Of Your Love" (from the band's debut album 'Crave'), and the crossover hit "Fix My Eyes". The figures are already out-of-date but they've sold 900,000 equivalent albums, amassed 284 million on-demand streams, 93 million YouTube views, and 1.07 million total consumption. 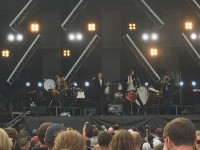 Now, fans are marking the 5th October in their diaries, the date when FK&C's 'Burn The Ships' album will be released. Joel spoke about the album's "Joy" single. "'Joy' is a bit of an oxymoron because of its sort of up, fun, dance rhythm beat and chorus, and yet the sentiment of the song is founded in a deep question mark. When you're faced with despair or sadness or bad news or being harried through life, what do you choose? Do you choose joy or do you choose sadness? The theme began probably two years ago when Luke and I were talking about the new record and someone had asked us what did we think the sentiment of the album would be? We said, well, we think this idea of joy is very strong. Fast forward to the beginning of last year, the first song we actually officially wrote for the album. All of a sudden we kinda realised this was the song that we needed to write. So it's been a real benchmark and a lens to look through for the rest of the album. There are songs about our wives, songs about life, songs about God on the rest of the record. But it's seen through the lens of how do we find a way through it all, to choose this lovely three-letter word."

Luke spoke about the pressure that inevitably comes from working and recording an album to a timetable set by a record company. "Deadlines are your friend and [at the time of the interview] we're about three days shy of having to turn in half the record. Music is never done. It's creativity. There's a sense that though I love the finishing/completion process I never get to really taste it. Because in music it's never finished. The show is sort of done, but there's always another show. There's always a new song, a new idea. But I really crave the idea of being able to hold the CD for the first time and being able to find some kind of completion in it. Deadlines are good, and I think where we get settled, where we find the closure is, 'Have we given everything we can to it? Have we collaborated well with each other and with the rest of the team of producers and musicians? And is it honest?' And once we answer those questions, there's a little bit of a release. We'll look back on this and say we could have, would have, should have. But you can be settled at least in the idea of we did the best we could with the time and the resources that we had."

One of the unexpected collaborations on 'Burn The Ships' is the album's closer and second single "Pioneers" with the Smallbone brothers duetting with their wives Moriah and Courtney. The hugely powerful anti-human trafficking film Priceless clearly demonstrated that the Smallbone family was, and continues to be, an exceptional catalyst for their creativity. Said Luke, "We were raised in a family that was very creative and so if you had an idea that you felt was a great idea then as kids our parents encouraged us to chase those dreams. We made a film called Priceless, and our older brother Ben was the director for that, and Joel was one of the actors and I was one of the producers. I think it comes from 'hey, if there's a will there can be a way'. I think ultimately it starts with music, and music just so happens to potentially open some other doors. Everything costs something, so if you're gonna go make a film it's gonna be a lot of time, it's gonna be a lot of effort similar to music. So you have to make sure that your passions, the messages you want to communicate are worthwhile for the sacrifice. Making a film is very, very complicated as is making an album. We've been working on this new album for nearly a year and a half now. It takes a lot of time; it takes a lot of effort; it takes a lot of emotional vulnerability because these songs aren't just songs that you conjure up in your head. They are usually being conjured up in your heart and to expose your heart in that way is a vulnerable experience. But I think ultimately it starts with music and seems to open up some other doors and opens up some other platforms, and I think we're willing to walk through those doors if they're the right doors."

Christian musicians are sometimes accused of being shallow propagandists. Such a perspective doesn't ring true when faced with the passionate, thought provoking and challenging music of For King & Country. Commented Joel, "There are things that we have certainly been soap boxers for; talking about chivalry, talking about a woman's worth, those are things that we share at almost every show. Music is a universal language. We were in Poland two days ago and most of the audience didn't speak a speck of English and yet these songs had brought thousands of us together and they were so impacted by it. What we have made an effort to do is write honestly. But if you start getting tangled up in trying to convince people or trying to persuade rather than just speaking honestly from your experiences, then it feels less like a song and feels more like propaganda. If we wanted to create propaganda pieces we probably would not be musicians, we'd probably be spies or something."