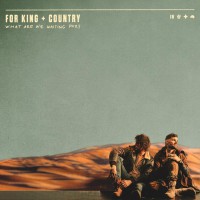 THE MOST popular group in Christian music, For King & Country, will have a new album 'What Are We Waiting For' released in March. A single from it, "Unsung Hero", is currently getting radio play around the world. 'What Are We Waiting For?' is the platinum-selling duo's first album of new music in three years and features 13 original tracks from Joel and Luke Smallbone. Read a press release, "Fans can expect a return to the lush and evocative pop sounds the duo has perfected over the years, while Joel and Luke take pen to paper and confront relevant issues with poise, grace, and groove." A 32-city tour of the USA will start on 31st March with special guest Dante Bowe.