Francesca Battistelli: "The Breakup Song" kicking out fear itself 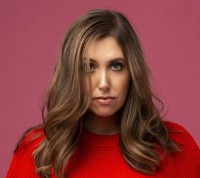 In 2014, New York-born, award-winning CCM singer Francesca Battistelli released her 'If We're Honest' album. She had already gained major success with Christian radio hits like 2008's "I'm Letting Go" and the Grammy-nominated "Free To Be Me", and 2011's "This Is The Stuff" and "Motion Of Mercy". But it was the release of 'If We're Honest' which was to take Francesca's ministry to a new level. On the Deluxe Edition of the album she recorded a version of "Holy Spirit". She wrote at the time, "This has been one of my favourite worship songs since I heard Bethel Music's Bryan and Katie Torwalt sing it a year or so ago. It is such an anointed song and I am honoured to get to cover it on this record. Leading people in worship is my true heartbeat and this song is an incredible moment every night we get to play it on tour. Can't wait for you to hear it!"

The public certainly did get to hear it as, when released as a single, Francesca's stirring version of "Holy Spirit" became a huge number one US Christian music hit. In 2016, at the 58th Annual Grammy Awards, "Holy Spirit" was named Best Contemporary Christian Music Performance/Song. In late 2016 Battistelli toured with Bethel Music and was featured on two songs on their 2017 album, 'Starlight'. Also that year she released an album which reflected her extraordinary rise and rise in Christian music ministry, 'Greatest Hits: The First Ten Years'.

In June 2018, Battistelli released the first single from her forthcoming album, 'Own It'. The title of that single initially raised some eyebrows amongst her legion of fans. Francesca is married to and managed by Matt Goodwin, whom she met on a Winter Jam tour when he was playing drums in the band NewSong, and had subsequently borne him four children (now five). So to record and release a song called "The Breakup Song" caused some momentary worries among her supporters. But these worries were soon allayed when they heard this powerful song, written by MercyMe's Bart Millard and writer/producer David Garcia (Bebe Rexha, TobyMac).

The song was not about the end of a relationship but breaking away from fear. Battistelli spoke about her new single to JFH News, "Fear is a universal struggle. We all deal with it in different ways, but it holds us back from truly living. I came to the point where I decided I wanted it out of my life for good. This song is my anthem and I pray it encourages others to break up with fear too."

"The Breakup Song", currently being featured on Cross Rhythms radio, is indeed a telling anthem about kicking out fear:-

"Sick and tired of being sick and tired
Had as much of you as I can take
I'm so done, so over being afraid
I've gone through the motions

I've been back and forth
I know that you're thinking you've heard this before
I don't know how to say it
So I'm just gonna say it, yeah

"Fear, you don't own me
There ain't no room in this story
And I ain't got time for you
Telling me what I'm not
Like you know me well guess what?
I know who I am
I know I'm strong
And I am free
Got my own identity
So fear, you will never be welcome here"

When the 'Own It' album was released, with its emotive "The Breakup Song" as its focal point, Francesca, who'd written nine of the 10 songs with several of Nashville's songwriting elite - Matt Maher, Mia Fieldes, Jeff Prado, Molley Reed, Ellie Holcomb, Seth Mosley and Josh Brownleewe - said, "These songs are so empowering. What they represent to me is my desire to own my identity in Christ, to kick fear out of my life, to own the present moment and not live in the past or even the future."