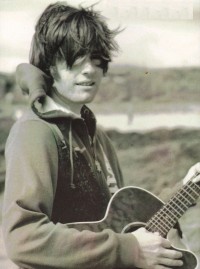 Fred Clark is a singer/songwriter from Maidstone in Kent who after a few years of releasing independent albums and gigging wherever he could has managed to do what the bulk of Britain's Christian musicians have yet to manage, scratch a living from his music. He told Cross Rhythms, "I am so, so proud to say that I am managing to earn a living from what I love doing. After graduating from uni last year with a 2:1 music tech degree I decided to go full time and this year especially it has gone from strength to strength, which is lovely. All the hard work is finally bearing fruit."

Fred's latest album 'Long Walk Home', which many of his growing band of supporters consider his best ever, came after a huge amount of work as he toiled to take his music to the next level in his home studio. "I think the final month of it just dragged on, the bulk of the work was done, it was just a case of continuously checking small parts, burning a CD, going out for a drive and listening to it in a car, on my iPod, on all sorts of different speakers, so it sounded just right. I also just loved how within such a short amount of time a song that was just a guitar and vocal could be transformed. One song springs to mind actually, 'In Time'. It is a song I have been playing live on loop pedal for over a year, so I knew it was an important song, and also a big song. I honestly struggled initially to get the recording right, I knew it had to end big, but it was not until one day my mum was home and I asked her to help me record some crowd vocals and, bam! Immediately, along with some tom drums, it was transformed and I was dancing around the studio with it blasting out. I was so proud of that ending."

Fred spoke about the powerful title track of 'Long Walk Home'. "I wrote the song in August 2013 shortly after working at a family festival where I not only played two sets but coordinated all the live music. Summer last year was tough for me, I had a lot of anxiety problems and so this project was a really big challenge. I did it, I thrived in it and look back very fondly on the festival. It was something I wanted to remember and so I wrote 'Long Walk Home'. The gist of it is simply, sometimes the harder, more challenging things in life are the more worthwhile, they leave you feeling euphoric, and that is what happened to me."

Another standout on the album is "This Is Your Song". He explained, "I wrote it for my gran and granddad! The two of them have been a massive part of my life growing up and still are now. My gran is one of the main reasons I do music and my granddad is the most selfless, supportive person I know. They mean an awful lot to me and I wanted to write something to really show that. Every time I play this song live, which is almost every gig, I can really picture them and I often pop by to tell them I have played it again and again in different places. They love to hear that."

Fred was born in August 1991 in Ashford, Kent. His father is managing director for a software design company, where his mother also works as a marketing executive. He explained that his Christian faith grew through a process of self-discovery. "It has been something that through growing up and making my own choices more and more in life I have developed a greater faith and done so on my own really. There is a priory very close to where I live, Aylesford Priory, which is a really important place for me. I go there at least once a week for a walk and just to collect my thoughts and have some quiet time. Whilst out gigging my faith is important to me, I feel it keeps me humble and grounded, but also I feel it offers me support. Obviously some of the things I do are scary, getting up in front of a lot of people and singing with my heart on my sleeve, I find my faith gives me comfort during times of anxiety and nerves, giving me strength."

During his teenage years Fred became enamoured with the music of acoustic songsmiths Jack Johnson and particularly Newton Faulkner. He began playing small gigs at school and at local charity events and then in 2009 began working on what was to become his debut album, 'Open Road'. It got a fairly enthusiastic review from Cross Rhythms, who commented, ".the promise of great things to come from a young man who really knows how to craft a song is definitely there."

His next album, 'My Liberty', fared less well at the hands of the Cross Rhythms reviewer: "The album is let down in the way vocals are recorded and mixed." Fred commented, "Looking back, I totally agree with the review. I stopped selling 'My Liberty' not long after 2011 and have not since. I feel it was a rushed album, for a number of reasons, but also it was the first album I did at home. My 2009 album 'Open Road' I recorded in my school's studio. I do not think I had quite mastered home recording until 'Good Morning Sunshine', so, whilst 'My Liberty' was fun at the time, I look back on it as something I learnt from."

Clearly Fred did learn. His 2011 album 'Good Morning Sunshine' was considered by all, Fred included, a much better CD. "I think I had really got my stuff together by this point, I knew my image, I knew my sound and it's a great piece of work as a whole. My favourite song is 'Falling For You'. It is a song I still play to this day, and I have lost count of the amount of times people have said it is their favourite. I don't think I'll ever stop playing it. I just remember how much fun I had recording it, it was such a positive experience, and then the release was fun too. It was around the time I had done my first year at uni, I had travelled round Europe in my gap year, I was loving life."

Fred's enjoyment of life came through on his next album as well, 2012's 'Stay Smiling'. Said the songsmith, "The high points of recording 'Stay Smiling' for me was incorporating the loops I used. Three tracks on the album, 'Hold My Ghost, 'Save My Faith' and 'New Found Day', I perform live with a loop pedal and they had already got a great reception live so I knew that the recordings had to really cut the mustard. I was so chuffed with the recordings because the loops were perfect with all the extra studio bits. I was proud of 'Stay Smiling', I think I got a bigger sound, a cleaner, clearer master of the album too. It just sounded polished and professional."

Fred took a little time out from gigging in order to focus on the recording of his current album. He said, "I had aimed to have at least 20 tracks that were good enough for the album. My intention was to release an 11 track album and then a deluxe version containing the extra nine plus four live tracks, and I am pleased to say I did indeed do that. Musically, I think it is more diverse. Something I had written on my studio wall and kept coming back to was the phrase 'less is more' and I really wanted songs on the album that worked in their simplest forms. 'Four Shots' for me personally does that brilliantly. I think all my albums are personal and a snapshot of the preceding year or more of my life, so the theme as always was singing from experience and what I have learnt from those experiences."

Fred admitted that his songs reflect an ever-increasing variety of subjects. He said, "I wrote a song for my mum and dad, I have written songs about surfing, about anxiety, about holidays, places, all sorts. I think that people respond really well to the songs about love, that's what I have always found, and of course when you have someone special it is easy to find constant inspiration for those songs too." I asked whether he modified his live set depending on whether he was playing to a Christian or non-Christian audience. He responded, "I do a different set for every gig I do, I plan it on the day and more often than not change my mind on stage as I react to the audience in front of me. I recently played at a big Christian festival near me called Brightlights and it did cross my mind, do I alter what I would do a lot, or not at all. In the end I just did what I felt I wanted to say the most, so I went in with a really powerful set. I was going through a very difficult break up at the time (end of June this summer), so I kind of needed to play uplifting, powerful, inspiring songs and that is what I did. The response was fantastic; it certainly made me feel better too."