Tom Whitman reports on USA's FUTURE OF FORESTRY whose 'Twilight' album has got the critics buzzing. 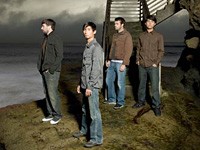 With such an unrelenting tidal wave of modern rock albums emanating from the USA it takes something special for the critics to notice an album debut. Yet this is what has happened with San Diego-based Future Of Forestry and their album 'Twilight' released in the UK in February. "These innovators push the boundaries of comfort and creativity to craft 12 tracks of liberating sonic exploration," wrote Kevan Breitinger for Suite 101; "A band that washes over you with the ethereal ambience and imaginative lyricism offered in holy praise," said Russ Breimeier in Christianity Today; while your very own Cross Rhythms reviewer James Morris enthused, "Future Of Forestry have managed to create what deserves to be hailed as a modern rock masterpiece."

The band, at that time Eric Owyoung (vocals, guitar), Nick Maybury (guitar), Luke Floeter (bass) and Spencer Kim (drums), recorded 'Twilight' with acclaimed Ken Andrews, who has previously worked with Mae and Failure. This modern rock masterpiece is tinged with tragedy, from the circumstances of the writing process to the short-lived line-up of a band that though set to continue under the same name, need to recruit new members before a west-coast tour in December as on 1st August Owyoung announced that Nick Maybury and Luke Floeter were to leave the band to pursue work with other artists such as Bethany Dillon.

Whatever the new line-up of Future Of Forestry turns out to be, one thing seems certain, 'Twilight' is one of the best albums of the year. After the basics were laid down by Andrews, the band took hold of the mix for two months in which they created effects from kitchen implements and the like to add to the ambient quality of the record. With the classical music training of Owyoung, the band forged to make a collection of songs far more than a rock record. In an era when bands and critics criticise the over production of mainstream music, Future Of Forestry achieve a balance between great production and a raw quality that compliments the honesty and emotion of the songs.

The emotions at the time of writing were undoubtedly heightened as Owyoung dealt with the fallout from his divorce from Malina, the keyboard player in his old worship band Something Like Silas. He explained to journalist Andree Farias: "I was completely alone - so empty, so searching. We say that marriage is when two become one. The flipside of that with divorce is that one becomes not just two, but two halves. And I really felt like I was not whole and that I was somehow half of a person. It was a real time of searching for me, especially with the circumstances being so public. We were on a David Crowder Band tour, and then suddenly we were off it. We were playing at church in San Diego, and suddenly we weren't. Our band was inoperable during a four-month period. There was so much emotion. When a couple goes through a divorce, there's already enough emotion within them. But then family makes it a really intense experience and on top of that you involve church, your fans, and all these people through MySpace and emails asking, 'What's happening?' There were so many voices that I just wasn't able to hear any clarity of God's voice about what to do with my life or where to go."

It is unclear whether what Owyoung did next prompted the name of Future Of Foresty, who emerged from the ash of Something Like Silas. But one thing that is clear is that the CS Lewis poem The Future Of Forestry, published in 1938 in The Oxford Magazine under the pseudonym Nat Whilk, is cited as the main and rather obvious influence for the band's name. Owyoung empathises with Lewis' concerns about industrialisation in the poem, and his own affinity with beauty and nature came to the fore as he travelled to find God's voice in this intense time. "I told my pastor I needed some time, that I was going to turn my phone off and just take a trip so that I can search for God's voice and try to understand what he's saying to me in these circumstances. My pastor was all for it and even financially supported me, because I wasn't working during that time. I told everyone that I was leaving, and I didn't know where I was going. I bought a down blanket and said, 'OK, God, I'm going to get in my car and I'm going to drive up the northwest coast. And wherever you want me to stay, I pray that you will provide for me. Wherever you want me to go, I'm going to hear your voice there.'

"I ended up in the Redwood Forest. I was just going to keep driving through, but there was this intensity of God's presence there that was almost frightening. I couldn't drive through that forest without getting out and absorbing whatever was there. I sat down among these huge trees; many of them existed around the time that Jesus was walking this Earth. I looked out and just felt the presence of God falling on me and refreshing me. Laying my hand on a tree, I thought about how it had seen ages and ages, years after years of change. It had a timelessness to it, and I saw that God in all of his strength and all of his wisdom had been watching, knowing, and most of all, understanding. I felt the love of God when I laid my hand on that tree, a confirmation of his love that I'd never experienced before that moment."

Happiness in loneliness seems to be a phrase coined for this time that Owyoung spent with God as he figured out his emotions and dealt with a number of questions that he started to ask himself: "Questions of, 'Am I lovable?' and 'Am I chosen by God?' Not 'chosen' in the religious sense of being called by God, but rather in the sense of questioning whether I was a child of God, that I was loved by God. I had been talking about his love for a long time, but I'd never been challenged in a way that forced me to ask myself, 'Wow, do I actually believe what I'm talking about?' Because there I was, half a person and broken to the core, wondering if God truly loves me, if he truly cares and if he's there for me."

These questions are core to our existence as Christians, and to the healing and restoration in Owyoung's life as he began to deal with the hurt and then married childhood friend Tamara: "God had done so much in my life to teach me about his love that he filled me up with this desire to love. It was just pouring out of me. Through his Spirit, it was very easy to love again. Now to feel loved, that's been difficult for me, and a journey in my marriage now. I think that anybody who has been through a divorce carries the wounds with them. For me, I have needed my wife through this marriage to constantly be reminding me of her choosing me, of her trusting me. Had I not gone through a divorce, maybe it would be easier for me to do those things. But what matters most is that my wife does believe in me and she's constantly reminding me of that and walking with me through that process. The vulnerability that I've had in sharing about my past marriage and involving that experience with my new marriage has been what has brought us together. It's bonded us. She's been a real rescuer in my life - a real point of God's touch in my life."

As old relationships have come to an end and new relationships have been forged over the years, in his music and personal life, Eric Owyoung continues to find artistic expression in Future Of Forestry and in producing various artists. Members have come and gone, and the band are two down at the moment, but the vision for 'Twilight' remains the vision for the music Owyoung continues to create. He said, "This album was written in the context of some very difficult personal experiences. It was a year of a lot of tears and losses, a year of searching and a lot of finding. The record covers so much of that and is very personal. I am looking forward to seeing how those life experiences create connections within people's hearts. Music has a strange and beautiful way of facilitating meaningful connections. That's what we want to be a part of."

The opinions expressed in this article are not necessarily those held by Cross Rhythms. Any expressed views were accurate at the time of publishing but may or may not reflect the views of the individuals concerned at a later date.
About Tom Whitman
Tom Whitman is 21 and is studying multi-media journalism at Bournemouth University.