Tony Cummings spoke to Dallas-based rapper GALLERYCAT about his music, ministry and his D-Boy connection 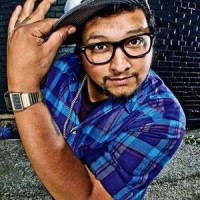 The introduction to rapper GalleryCat's Facebook page is distinctly different from the kind of brash self-promotion you normally read on such things. "It doesn't matter to me if you never buy my music, because it's all free anyway. It doesn't matter if you never make it to any of my shows because they're usually in a different city/state/country every other night. My success and my failures will never be defined by or linked to tangible things. My success rests solely on the calling on my life and obedience to that calling."

Angelo Gonzalez, otherwise known as GalleryCat, has indeed travelled far and wide in response to God's calling on his life. The Dallas-born rapper is the Teams Manager of Extreme Tours, the organisation that oversees music and sports events targeted at disaffected youth around the world. (This month Extreme Tours are visiting Jamaica, India and Japan). The Extreme Tours events feature an ever-growing list of local bands and soloists prepared to play and tour for free to spread their message of hope. And at most of these events you'll find GalleryCat making with his powerful flows about the dark side of life and the light that shines through the darkness.

Angelo grew up in Dallas. He explained, "I fell in love with hip-hop around age seven or eight. Mine was a very religious home and I was told I wasn't allowed to listen to it - which meant I had to crawl under the house with a radio and record hip-hop in the evening, then listen to it on my headphones. That led to my father catching me and instead of me being in trouble he started looking for alternatives, which led me to a guy named D-Boy."

D-Boy Rodriguez was a pioneer of Christian rap music. His parents, Cookie and Demi Rodriguez, ran the Street Church Academy, an anti-gang ministry, and by the mid-'80s D-Boy was causing a stir in the churches throughout Texas for his radical raps pinpointing the perils of the crack cocaine epidemic, gang culture and the need to find a new life in Christ. With his rapping sister Gee Gee often accompanying him, D-Boy played numerous concerts and in 1989 Californian Christian label Frontline Records signed him and released the album 'Plantin' A Seed'. It was followed by a second album 'The Lyrical Strength Of One Street Poet'. By this time Angelo had developed his own rapping skills and, despite being only 10 years old, was sufficiently adept to undertake a tour with D-Boy and his entourage.

D-Boy and his parents made national news in 1994 offering Street Church Academy as a neutral meeting ground for rival street gangs to negotiate truces. But then tragedy struck. On 6th October 1990 D-Boy was shot and killed in an unsolved drive-by shooting. The murder had a devastating effect on many, none more so than Angelo. He remembered, "When he passed away I was 11 years old and I had just done a tour with him. I remember being at Street Church off Longview Road in Dallas; I remember walking up to the casket, putting my hands on him and saying, 'In the name of Jesus, get up!' When he didn't, that was a faith-breaker for me. I was like, 'You said we could do these things.' I didn't understand, but for me that was it. Shortly after that I began smoking a lot of marijuana. First time I got high was with my grandfather at age 11; started dealing drugs at age 12 - still going to church, still rapping at church, doing the church thing. For me, Christianity was just a cultural thing; it wasn't a personal thing. It wasn't until college where I started saying, 'OK, God, I will accept whoever you are; whoever you make yourself real to me as, I will serve and follow.' I went to a Mosque for a while. I went to a Buddhist temple for a while. I even sat with the some of the Moonies. I was pretty much kicked out of every organisation. I went to a Jewish synagogue; they were very welcoming and eventually directed me to a place where I could practice Judaism as a gentile."

Angelo continued, "When I was there, I didn't understand the Hebrew, so, as someone who suffers from ADD, I would play with a tech deck, which is a little finger skateboard. Because I didn't want to do that - they were so reverent - I put it in my pocket, and I started reading the Scriptures of Isaiah. It started talking about the Messiah being born of unfertilised ground, of dry root; who was beaten and wounded for our transgressions. I was like, 'This is speaking of Christ.' I was directed to a Messianic temple and there I fell in love with Christ all over again. It wasn't the Jesus of the church, it wasn't the Jesus of religion; it was the Jesus who had saved me, it was the Jesus who met me in my place."

It was in 2000 that the one time boy gospel rapper returned to the loving arms of Christ. Remembered Angelo, "I was working at an electric company and I ended up dropping out of college. I went back to school a couple of years later and started studying the doctrine of Christian theology; but along that route is when I started realising there are a lot of broken and hurt people. I started a thing called a skate church in Dallas at a small church, then I found another skate church and started volunteering at every skate park I could, because that's the culture I grew up in. I started doing this skateboard ministry with my friends and some of the local kids. We started going out and doing concerts in the park where we would set up a skate park and play music. Had some friends from Warped Tour I'd met years ago that would come out and play at the shows, which was cool because they were free community events. Then I found out about the Extreme Tour that did the exact same thing I was doing in Texas on a national level. They asked me to be a part of it, and I said yes. I went out on Extreme Tour in 2005, and I've been with them ever since. It's been beautiful to be part of a ministry that doesn't scream the Gospel; it doesn't just declare the Gospel, it demonstrates it, and it's been beautiful to be part of a demonstration of God's love. Throwing up banners and saying, 'Welcome to the Christian rock show' is not what it's about."

He has recorded several projects including the albums 'I'm Doing Fine' (2009) and 'It Won't Be Long' (2014). Although he's sold some copies on iTunes, all GalleryCat's music is available for free on his own website. Angelo/GalleryCat has mixed feelings about the rappers currently working within the Christian music industry. He said, "I know a few of them. I understand and respect what they do. I believe that there's a difference between edification and outreach. I believe that the students need Christian rap as an alternative, because it's better than the garbage being played on the radio. That's good for teaching kids: it's like nursery rhymes for the Church. Rhythmic, educational - that's wonderful, and I have no problem with that. Somebody played a song for me and the chorus was like, 'Do the Jesus stomp!' As someone who used to sell drugs growing up, I don't think someone in a very impoverished neighbourhood would turn the radio on and hear 'Do the Jesus Stomp' and go, 'Wow! I should stop living this lifestyle!'"

Angelo continued, "I listen to a lot of gospel rap and it's like, 'You guys need to change the way you live because you're wrong, and I'm not perfect either.' It's not very personal. Yet I know several people on the Christian ministry who've struggled with drug addiction, promiscuity, depression, anxiety; yet they won't talk about it because, on the public side, they're supposed to be the perfect example - free in Christ. I talk about my depression, I talk about my struggle with promiscuity and how God's delivered me from it, how, even though I'm a Christian, there are times where I feel alone, where I have doubts. It's almost taboo: you can't say as a ministry of faith that you question. I have experienced miracles, I've felt the hand of God; there are still times I fall into this rut where I go, 'God, where are you?' God says to me, 'I'm asking you the same question. Where are you? We were walking together, and you made a conscious decision, "I'm going to make these things priority in my life". All of a sudden, Christ took a backseat.' I'm like, 'Where are you?' He's like, 'I'm right where you left me.' His hand has always been on me, always kept me safe. A lot of the music I do comes from a place where I struggle with that. The beauty of Christ is that I need him [in order] to believe in God."

Great article. To God be the glory!