Sheffield's GARETH ROBINSON is one of a new breed bringing anthemic and intimate God songs clothed in guitar-driven post Britpop. Mike Rimmer talked to the man. 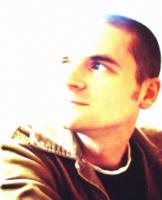 As anyone present at the spinetingling, spirit-lifting worship led by Gareth Robinson at last year's Cross Rhythms will tell you, this Sheffield-based musician is an exceptional minister of the Gospel. As any purchaser of 'You Alone', Gareth's debut album on Kingsway, will tell you, Gareth is an exceptional songwriting talent up there with the Matt Redmans and the Tim Hugheses. And as any media student will tell you, the fact that Gareth is based at St Thomas, Crookes, he is well versed in fending off queries about a tabloid-fuelled scandal that rocked the Church Of England a decade ago. (St Thomas, Crookes, once hosted the notorious Nine O'Clock Service which lurched from dance culture worship innovation to heresy and abuse of its congregation thanks to a rogue reverend, one Chris Baine.) But Gareth is no prisoner of the past - the NOS debacle occurred years before he joined the church. Gareth's relationship with Sheffield happened because Sheffield University was the only place where he could study Biblical Studies and not have to study Theology. Arriving as a student he vowed that he wouldn't live in Crookes (a popular student area) or go to St Thomas' church, the parish church of that area and popular amongst students. Unfortunately he failed rather spectacularly on both of these points since these days he lives in Crookes and leads worship in St Thomas'.

Thankfully he has been more successful with other choices that he has made. 2003 saw the release of his debut album for Kingsway, 'You Alone', and appearances at events over the summer including Cross Rhythms festival. His guitar-driven style of worship and warm friendly personality have endeared him to many.

On a warm July afternoon we're chatting in my car and Gareth is confessing that although he was raised in a Christian family, his teenage years were a contradiction of wanting to be a Christian but also struggling with compromise. He admits cheerfully, "I just lived a good, paradoxical double life of being a hypocrite! Did that really well!"

Like many raised in church he went to church and looked good on Sundays but was one of the boys at school during the week. "My language was fairly foul most of the time," he remembers. "I went through a rebellious period where I had just heard enough of trying to be a 'good Christian'. I knew I had a relationship with Jesus, I knew that the Holy Spirit lived inside of me, I knew that he was there with me every day. I tried really hard not to offend anybody but it was just too hard! So I didn't try very hard! But I got through that and I learnt what it meant to be a disciple rather than trying to be a good Christian."

He continues, "I knew what the Good News meant for people who'd been raised up in the Church because a lot of people who've been brought up in churches, not necessarily through bad teaching but just purely because of how we've been raised in the west, feel guilty and so we go to God for forgiveness and that makes us feel better, or it's supposed to make us feel better. It never actually made me feel that much better because I didn't have that peace that I had a relationship with God, it was just like, 'Come to the cross, get forgiven, then you're fine!' as opposed to, 'Live your life in the Kingdom of God and live your life as a relationship with the Father.' I know that my church did a really good job of trying to make sure that we didn't grow up thinking Christianity was just a set of rules, they really did teach us that but I didn't 'get it' until I was a lot older."

Whilst at Uni, Gareth joined the Christian Union and became a worship leader. He had led worship for kids at his church during the paradox of his teenage years and he'd always wanted to do something with his musical gifts. "At the same time I was struggling with everything a teenager struggles with. Actually, the journey in worship leading began when I got my first guitar when I was 10. My granny bought it for me for my 10th birthday and to be honest, the only songs that I either knew or could play were Christian songs. My mum would sit down with me and sing very patiently, whilst I played! They would be really simple songs like "Lift Up Your Heads", that was my favourite song! A good '70s classic and it only had three chords in it and I could play them all!"

It was after graduating and while working as a primary school teacher that Gareth joined St Thomas' church. Quite quickly, he found that the teaching and direction of the church encouraged him. "When they were talking about reaching young adults, it really started to stir my heart. I'd been involved in youth work and I thought that was what you should do if you're an on-fire young Christian, then you've got to be doing youth work! Suddenly I was going to a church which was talking about people my age being Christians and going for gold and seeing other people my age becoming Christians. It stirred me so much that I decided I needed to be a part of it."

"It was a big jump but Mike Breen who is the rector at St Thomas' prepared me for it by saying, 'Speaking at church is fine and then going to a conference, it's an entirely different skill.' Those are probably the most helpful words he could have said because I probably would have gone and thought, 'Oh I'm just going to do the same thing,' but actually it's so hard you can't. The relationship you have with a group of people who you're leading in worship.it's SO different if you're in small group, than if you're leading a conference. You're obviously seeking to take them on the same journey, meeting with the Lord, but I guess the tools that you use to do that are different for different places."

Of course, the release of his debut album 'You Alone' will only serve to raise his profile even further. The album is packed with gut wrenching anthemic songs and some gentle intimate ballads all clothed in a post Britpop guitar-driven sheen. Of course this means that when Gareth leads worship at conferences, more people will be familiar with his songs. He confesses, "That is going to be nice actually! I've gone to places like Spring Harvest in the last two years and it's always been a bit of a chore thinking, 'I wonder what song I can get away with doing and how many I can do of mine?' I really hope that this does open doors for me to feel like I can lead people more in the worship journey that I participate in. Using my songs and really, the ways that God's revealed himself to me. I LOVE using other people's songs though, so I'm never going to stop doing that because usually," he laughs, "they're better songwriters than me."

Just as he was wrong about where he would live and where he would worship, I suspect that he's also wrong about the quality of songs on the excellent 'You Alone'. Clearly Gareth has already joined the choice throng of leaders of cutting edge worship. Long may he continue.

love the 'you alone' album! it is hard not to be struck by the words and the style in which they are sung!