GARETH ROBINSON, one of the contributors to 'Praise Mix 2002', spoke to Ian Boughton. 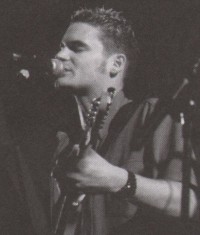 Ian: To be a worship director in today's church, do you have to be extremely sensitive to a wide range of ages and tastes, and how do you manage to please everyone and God at the same time?

Gareth Robinson: Gosh - I probably don't manage to please them both! The structure of our church helps, because among about 1,500 members, we have several different gatherings - we have one which meets in the church parish, one which is committed to the city, and one which is young adults committed to reaching the emerging generation. So I try to be multi-tasking, and I cannot lead worship to one as I can to the other. To one, being sensitive to the needs of the pillars of the church who can't bear loud music, I haven't used my electric guitar for a long time... but to the young adults, I love leading with louder songs.

Ian: You 'oversee worship' for Tribal Generation - what's that idea all about?

Gareth Robinson: TG started off as encouraging churches doing things for the emerging generation. Some became linked through the Tribal Training course, but where it stumbled and got confused was that churches were saying 'help us', but they weren't accountable to us. It's now focusing more of the relationships between churches wanting to reach Gen X. My role is more of a website-management job. The idea of the website is a resource to those committed to the same thing - it's open for anyone, if they're doing stuff that works for Gen X then we want them to download stuff they can use and upload stuff they've tried and tested. It's trying to work out how you do church for young adults in a way that makes them want to stay, not leave. I want to see it encouraging the 18-35s to do church in a more relevant way. I didn't see many people in their late 20s at Spring Harvest - they're a lost generation (or maybe I'm blind!). This is a resource to discuss how they can be accepted, not judged.

Ian: Your church hit the news some years back with the notorious Nine O'clock Service. What has been the legacy of this?

Gareth Robinson: John Wimber did a conference here in the '80s which apparently turned into a powerful time with God, prophetically saying that he was gong to do something big with the young adults. The response was the setting up of a service to use dance music, lights and so on, at 9pm. Well, it went a long way from accountability, and our church ended up disowning it. After some years it blew up into scandal, some really grim stuff was going on, and it was all over the papers. I guess hundreds of people lost faith in the church, if not in God. That's what we were known for. But there's a positive legacy - it taught us about accountability and how to minister to young adults in the right way. It may be that we're now seeing God's word redeemed, which is wonderful.

Ian: What are you most proud of about your CD?

Gareth Robinson: What I'm most pleased with are the songs, when people come back and say that someone who is not a Christian, or one who is struggling with their faith, have got something from them."

Ian: How much of your music and live playing is aimed at 'committed' audiences/congregations, and how much to the non-Christian audience and is one easier than the other?

Gareth Robinson: Mostly to committed Christians, but we're just starting a Band Night in the Barfly, a local music venue. This is so those who play and write music, but not necessarily worship, can have the chance to air their stuff. We're planning on having it once a month.

Ian: Who has influenced you in the worship music you write?

Gareth Robinson: I love Matt Redman's lyrics. The way Delirious? write is also so refreshing - they push the boat out. I don't know how much I do in my own songs(!) but I don't like the idea of trying just for the sake of it. I love both Radio 1 and Classic FM, and I guess musically I'm more likely to be influenced by what I hear on the radio than what I buy in my local Christian shop!"

Ian: What songs do you have on the Spring Harvest album - and what are you proud of about them?

Gareth Robinson: "Good And Gracious" and "All Of Me". The first one is fun, and I like to make lyrics that resound with biblical truth, put in a new way. Most "holy" type songs are slower, more meditative songs. "All Of Me" took five minutes to write at the end of a very frustrating songwriting session. Good songs often come very quickly, and this says all I want to say about responding to God.