Gaz Simmonds: The Chesterfield songsmith who sings "I Wanna Be In California" 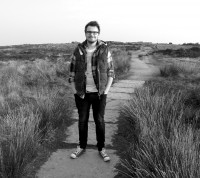 Regular Cross Rhythms radio listeners will be enjoying the catchy song "I Wanna Be In California". It's by Gareth David. . . kind of. Although the EP from which the song springs ('#mywifemycatandmyfamily') was originally released under that name, it has now been re-issued credited Gaz Simmonds. We asked Chesterfield-based singer/songwriter Gareth 'Gaz' David Simmonds why the change of name?

He responded, "I thought I'd give 'Gareth David' a go last year, but in the end I decided to revert back to Gaz Simmonds for three reasons. Firstly, I'm known as 'Gaz' to nearly everyone I know, friends, church, work, etc, and I found that I did a couple of gigs in places that I hadn't been before, but was still getting introduced as 'Gaz Simmonds'! Then, there's an actor called 'Gareth David-Lloyd', which I didn't think would be a problem because of the Lloyd part, but when it comes to Google, 'Gaz Simmonds' is less common, so saves a lot of hassle for advertising things like websites and iTunes, etc. Also, I'm not much of a self-promoter, so when I would introduce myself, it felt weird having what seemed like a 'stage name' even though it is actually my real name!"

Gareth was brought up in Chesterfield, Derbyshire. His mother was heavily involved with Samaritans Purse, mainly with Operation Christmas Child. She later became a regional manager for Samaritans Purse, where she worked for a number of years. Gaz's father worked, and still works, at the local college, originally as a sports lecturer but is now Assistant Principle. Said Gaz, "I have very fond memories growing up, especially when I gained a younger brother when I was eight. My mum's family were from South Wales, so I particularly remember lots of football on the beach."

From an early age Gaz was playing music. He said, "My mum was a violinist and I grew up playing the piano and violin. Both of my father's brothers are fantastic musicians, one of them a professional musician and producer, having played with great artists such as Mike Oldfield, Fish and many others. I would especially love Christmas time when one of my uncles would sit down at a piano. In my early-mid teens I started to learn drums and then guitar a couple of years later. That was when I started really enjoying music recreationally. I joined a few bands and started writing songs."

The songsmith spoke about his spiritual journey. "I am very fortunate to have grown up in a loving, Christian home. So at no point in my life would I consider myself to 'not be a Christian', but perhaps the most defining moment in my faith journey would have been when I was about 11 or 12, on a CPAS week away in Porthpean, Cornwall. I was prayed for by someone, who I think was actually one of the chefs of the week. I just remember that evening really knowing God's love, and knowing that this whole faith thing was for real, and it really was what I wanted to give my life to."

So how did Gaz begin writing worship songs? "It may sound clichÃ©d, but I started writing worship songs simply because I wanted to express my faith and love for God. Worship songs and Christian bands had a deep impact on me when I was a teenager and I guess writing songs was my way of expressing for myself what God had done in my life. Today I lead worship at St Thomas', Chesterfield. Between 2009 and 2013 I worked full time here as the worship and youth director. I've now left that job, but continue to serve as a worship leader." 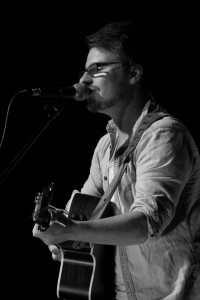 Gaz's recording career began in 2010 with the release of the 'Strength In Love' EP through Resound Media. Explained Gaz, "I recorded it after getting involved with Resound Media's Sound Consultancy programme. I had met Andy Baker a few years prior to this when I recorded a few songs with him on a day in the studio. Recording 'Strength In Love' was a great experience and I remember more than anything how much I grew from the experience. Seeing the process from start to finish, co-writing songs with great artists such as Andy Baker and Philippa Hanna was a great chance to learn and grow in my songwriting."

After the corporate worship songs featured on 'Strength In Love' Gaz's second EP took a different lyrical approach. He explained, "Over the past few years I have enjoyed writing songs for different audiences, playing gigs in various churches and venues, leading worship in different settings. And what I've most enjoyed is figuring out what kind of songs I want to write, and who for. With my previous EP, 'Strength In Love', the songs were much more 'churchy', corporate worship songs, yet I was fortunate to have the opportunity to play in settings that weren't so fitting to these songs. So a big part of the shift was writing songs that I hoped would speak to the audiences I was playing to.

I firmly believe living the Christian faith, and a life of worship is about first and foremost living life with those around you to the best of your ability, in a way that honours God. The writings of the Bible are not so oblivious to the world around. So a big part of writing the '#mywifemycatandmyfamily' EP was to write about life, but from a place of thanks, appreciation and worship. Even though on the outside, it's not a 'worship' album at all, it is to me. At the time of writing the songs for the project I had just been through quite a full-on year. Firstly I got married to my wonderful wife, Katie (that's the wife part!), we adopted a cat (that's where the cat comes in) and in the process gained new family. Yet at the same time, just two months after getting married, two of my grandparents passed away within the space of a week, and at the same time one of my uncles came extremely close to losing his life from malaria, which lead to complete memory loss and was hospital bound for months. With all of these ups and downs happening in quick succession, it was a year that I learnt to really appreciate my family, so these songs come from both a place of struggle and a place of joy, but grounded in my faith and my family."

Gaz spoke about his Cross Rhythms turntable hit "I Wanna Be In California". "This song is all about appreciating my family. Even through times of grief and worry, it was the encouragement and strength of my family that encouraged and inspired me. Sometimes it's easy to want to run away, to think 'I wanna be in California', but it's at those times it's important to look around and to love and cherish those around you."

There is quite a bit happening musically for Gaz at the moment. He listed some of his activities. "With regards to leading worship I'm heading up the music for a new, monthly Late Service we've started in Chesterfield. I have recently written a song for Peter Nevland's 'Tree Of Psalms' project, with Resound Media, which is being recorded at the moment. Not sure when this will be released, but that's in the pipeline. Also, I'm working on a new single which I hope to release in May; I'm pretty excited about this song."

In all his busyness Gaz has also been reflecting on the Lord being a God of Eternity. He said, "I love how it baffles my mind that God is far greater than time itself, so to him, yesterday is as much a reality as tomorrow, or even 50 years down the line. It's been a great comfort to me to think, even though I might be burdened with stress or worry, God is far above it all. A constant encouragement to me is being able to say: God, I won't worry about tomorrow, because I know you're already there."

Looking forward to new material in the future.