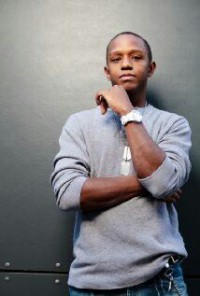 Michigan-based rapper George Moss grabbed the attention of the media recently with the release of his "Set It Off" single. The publicity shots for the single show George carrying a sledgehammer and a can of petrol in front of what looks like a burning church building. Not surprisingly the emcee has had to clarify the message contained in "Set It Off": "This is isn't about destroying the church, it's more of a rescue mission to save people from the bondage of believing that they are saved simply because they go to church or by what they have been taught. Yet, Scripture would say that they are going to Hell."

The burning desire of George to reach people within the Church that are biblically illiterate yet remain unsaved is something that has been with the rapper for quite awhile. He told JesusFreakHideout, "This has been something that has been stirring inside of me for years, so I guess it's not just one moment of inspiration, it's more something that I just can't bite my tongue about anymore. The fact is that there are literally millions of professed 'Christians' that have made a profession of faith, prayed the sinner's prayer, yet they have not repented of sin. And I'm not just talking about people that only come to church on Christmas and Easter, but we all know that they live in open and deliberate sin every day. The people I really am hoping to reach are those that are described in Matthew 7:21. Those are people who talk the talk, and look the part. They are the ones that genuinely believe in their heart of hearts that they are saved. They are actually sincere in their confession, and they even are able to perform many miracles in the name of Jesus. Yet on that day of judgment, they are going to hear God say, 'I never knew you, depart from Me, you worker of lawlessness.'"

George continued, "I don't believe or preach that you have to do something other than put your faith in Christ for salvation. But I am saying that if you don't live a life of repentance from sin, and seeking the Lord with all of your heart, it's very questionable whether or not you ever actually put your faith in him."

The rapper began writing the song "Set It Off" over two years ago. He explained, "At the time, I had no idea that this would be the message behind it. It actually came about after being on WinterJam way back in 2011. I was asked to come up with a song that they could use to start off their show. So the phrase 'Set It Off' came to mind. When I think of that phrase, I automatically think of something radical, or extreme. I just wanted to bring that feel to the start of my live performance, but as I began to develop the concept, I really felt the Holy Spirit showing me that there was an extreme message that 'the Church' needs to hear.

"The song was produced by George 'GRoc' Ramirez (Lecrae, Da T.R.U.T.H). I told him I wanted something more aggressive than my last radio singles, 'Loud' and 'Hands Up'. Then I asked my friend and up-and-coming emcee Steven Malcolm to hop on the track. I really wanted to hear some crazy fast double time flow at the end, and so he was the guy to go to for that. And I also wanted to give him some exposure to a wider audience because he's just dope on the mic. I also had the song edited and mixed by Jacob Morris from Reach Records to really turn the song from just rap verses over a beat, to an actual song that I think people will be able to vibe to."

George was born in Grand Rapids, Michigan on 23rd September 1982. He first hit the Christian music scene in 2002 touring with Michael Fuggit as one half of the hip-hop duo UN1ON. Their 2004 self-titled debut EP got them noticed but he and Fuggit soon went their separate ways. In 2005 George co-starred in the Christian films God Help Me and Squad 77. Two years later the "Whoa" single was released which gained some airplay and by 2008 George's debut solo album 'All Or Nothing' hit the streets. He was on the bill of Creation Festival: The Tour and by 2009 was supporting rock band Pillar on their Confessions Tour. In 2010 he was part of the Modern Heroes Tour alongside Group 1 Crew and KJ-52. George learnt a lot from KJ-52. "I learned a lot about ministry and this career from him. Ten albums in twelve years. I want that type of longevity."

George strives to live out his faith and share it with others. He has travelled across the country as a speaker at public schools, churches, and festivals, reaching thousands of teens and young adults. After years of playing a supporting role as a hype man, George spent 2012 debuting songs from his 'It's Time' album on multiple concert tours and a host of performances at Christian music festivals across the United States.

Now with the release of "Set It Off" the rapper is again attracting attention. So what made George decide to use the imagery of blowing up a church building to communicate your message? He answered, "Ultimately, I wanted to communicate something that would spark a conversation. In our little conservative Christian world we live in, it's rare that someone will rock the boat - and if I can be honest, I didn't want to rock it either. Christians are all for going out into the world and sharing the Gospel with people. But very few, if any, Christian - and I use the term loosely - artists will call out the institutions, or should I say corporations, that we call church on the fact that most of its members don't even know the full Gospel message themselves. Let alone being able to share it with the world."

He continued, "I actually braced myself for some strong reactions, but I haven't seen many strong reactions on either side just yet. I wish there were. I wish Christians would show some signs of strength. It's so ironic that we claim to serve the all-powerful Creator of heaven and earth, yet I'd bet you'd be pretty hard-pressed to find someone that would describe Christians as a whole as strong. I know that sounds a bit brash, but I just have to be honest."