With some of the loudest, brashest rock music heard for years, America's THE ELMS are in the ascendant. Tony Cummings spoke to the band's Owen Thomas. 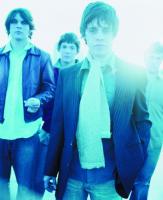 When King Solomon observed there was nothing new under the sun he probably wasn't thinking of rock and pop's tendency to recycle old sounds to a new audience. But the wise king's observation still holds true. A wave of popularity for bands like U2 and Aerosmith have demonstrated that old school stadium rock is cool again. In the USA Christian music scene too, bands like All Star United, Kutless and The Elms have demonstrated that a defiantly retro attitude towards classic rock music can connect with today's youth. There are differences from their mainstream compatriots though. While the secular bands may still hold the tired 'live fast die young' ethos the Christian new wave eschew such destructive conventions. Says Owen Thomas, vocalist, guitarist and songwriter of The Elms, "Anybody who wants to sit down and convince me that to be a legit rock 'n' roll band you gotta do drugs, you gotta party, you gotta die young [is] going to be in for an all night conversation because I don't think that's the essence of rock 'n' roll."

Although still in their 20s, The Elms have already clocked up six years together. Owen Thomas, brother Chris (drums), childhood chum Thom Daugherty (guitar) and newcomer Keith Miller (bass) have all the pieces in place to become the next breakout rock and roll success story. The Thomas brothers began playing acoustic based music under the name Just Visiting for their Seymour Indiana church in 1997 but quickly found their ministry demanding more than a casual commitment. "We did some limited touring in 1998", Owen remembers, "but by 1999 we were touring all the time." In the place of any kind of record deal the boys teamed up with an additional guitarist and bass player, changed their name to The Elms (named after a restored coach house one of the Thomas' uncles owns in England) and recorded an independent project.

Another year of touring and over 6,000 units later they came to the attention of Sparrow. "The Elms," says A&R rep Lynn Nichols, "are like all great guitar bands; two guitars, bass and drums or as I have often said, 'The way God intended it to be.' The simple beauty and power of their songs and their show absolutely knocked me out! Their fresh sound combined the shimmer of pop with the guts of rock and landed the boys in a sonic realm that is both fresh and classic." After signing the band to a multi-album contract the label quietly released a self-titled EP and sent them on yet another series of tour dates.

Along the way they also picked up a new guitarist who happened to have been a friend since grade school. Thom Daugherty had spent some time as a "hired gun" for Myrrh act Miss Angie but had always known someday he'd be making music with his friends Owen and Chris. "Even going back to the age of nine or 10," Daugherty recalls, "I somehow just always 'knew' that Owen and I would be playing music together." As the band prepared to hit the studio their original guitarist left and Daugherty filled the gap perfectly. "It's amazing to me to step back sometimes and observe how God had a plan all along, and how he orchestrated this thing to come together like it has." Keith Miller was added on bass after the band played a New Year's Eve show that he put together. "Chris and Thom auditioned him while I was in the studio," Owen explains, "but that was really more of a formality than anything. We knew he fit the band perfectly."

The band's first full scale album 'The Big Surprise' was just that - an exhilarating blend of Brit pop influences and radio friendly songs such as "Hey Hey" and the haunting "The Buzzing Won't Stop". Says the album's producer Brent Milligan, "They played their own parts, wrote these amazing songs and seemed to have a perfect vision of who they are as artists." Owen comments, "There are a few tunes on there we absolutely love and will play 'till we pack it up, like "The Buzzing Won't Stop!" or "Who Got The Meaning?" It is, however, way more of a studio-oriented album than a "band-playing their songs and loving it" album. The new album, 'Truth, Soul, Rock & Roll', is a product of playing 300 plus shows since the release of our first record. It's our band playing our tunes as we like 'em, and we couldn't have made a more authentic album as it relates to the four guys involved."

What takes 'Truth, Soul, Rock & Roll' to the next level is the ferocious guitar work. Admits Owen, "We wear our influences openly. I'd say for Thom, it boils down to a little Mike Campbell (Tom Petty and the Heartbreakers), a little Angus Young, a little George Harrison. We're fans of great rhythm guitar as well, nice big chords. So, Pete Townshend (The Who) and The Stones come into play there."

The Elms admit that 'Truth, Soul, Rock 'n' Roll' was made with the intention of catapulting the band into the mainstream. Confides Owen, "Even if it's just in our own heads, our records are always important and there's no way we're gonna put out something we can't stand by or love. So, we always make albums that we believe are good enough to go multi-platinum. Whether they do or not, hey, we'll see... who controls that part? Recording 'Truth, Soul, Rock & Roll' took about four months, which is longer than I anticipated. I immersed myself in every aspect of this album to ensure that the vibe was right, that it was dirty enough, gritty and soulful. The goal is to do the next album in three weeks, front to back. That's a feat for us, but that's next year's interview..."

A highlight for the band last year was some on stage appearances with mainstream rock luminary Peter Frampton. Owen explains how it came about, "We have the same agent in Los Angeles and he simply came across the album and really liked it. He asked if we'd open his available fall dates, and we were in. Those dates, for the record, were some of the best moments in our band's short career. There were nights our feet never touched the ground and we felt so purposed in that situation, like we were about God's business more than ever."

One song on 'Truth, Soul, Rock & Roll' currently getting airplay is "Speaking In Tongues". Owen explains the song's message, "'...Tongues' asks the Church at large to consider whether it's effectively conveying the love of Christ to a world that learns by example. You don't tell somebody you love 'em, you SHOW 'em. Words are vanity, and if we're not gonna show people the love of God by our servanthood, our humility, our graciousness, they're not gonna get it. The world doesn't understand the Christian language we've made for ourselves, but everyone understands love."

With a big push into the mainstream, The Elms are a little uneasy of the Christian music industry. Says Owen, "In the old days of Christian rock, there was no 'Christian industry.' It was just rock bands that talked about spiritual issues and matters of the heart. It used to be [the mentality that], 'Some bands sing about God and some don't. Some of us love truth, some of us don't give a crap.' During that era, [bands] were still judged on the music. People would go buy an REO Speedwagon record and a Petra record at the same time." Owen isn't knocking the [Christian music] "industry," per se, he says. His own band currently has a foot in both worlds - playing bars like the Chicago haute one night and a youth convention the next in support of their latest release. "I don't know if there are any Christian rock bands that have ever done what we're attempting to do in the sense that I want to go out there and just really make this a legit rock experience," says Owen. "[I want] to prove to people that truth and rock 'n' roll can co-exist, and the very nature - the risk - that rock can exist with a loving God."

Perhaps The Elms' definition of "risk" makes all the difference in its mission to alter the status quo. "I'm not talking about the frivolous, boneheaded element of danger where there might be a naked girl onstage tonight or that the band leader might come out drunk," he clarifies. "I'm talking about the element where I might say something that rubs you the wrong way and urges your heart towards the things you might be doing wrong," Owen says.

For more on The Elms visit the The Elms artist profile