GORDON AND LYN LEE this autumn launched into a new career as composers and performers of a Christian musical. Tony Cummings spoke to them. 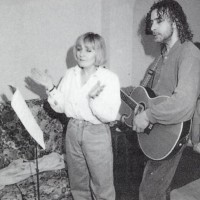 Christian music success comes in many shapes and sizes. Though Gordon and Lyn Lee are light years away from megabuck recording contracts and Dove Awards, theirs is a highly successful music ministry - and they've got an engagement book crammed with bookings to prove it The pivot for Birmingham-based Gordon and Lynn's musical ministry is an audience-participation musical, a modern-day musical setting of Jesus' most famous parable: The Prodigal Son, written primarily for use in schools. Gordon has a long established schools-work ministry and with the setting-up of a charitable trust, is about to become a full-time musical evangelist 'Prodigal Son' is also to be put on in churches. Says Gordon "At a time when family values and relationships are under more pressure than ever before, this modern musical is offered as a means of bringing parents and children together, to look at and question some of the issues of today." The way a typical production of 'Prodigal Son' works is that Gordon goes into a school and teaches classes the songs which feature in the production. When they have been learnt they are sung by the pupils themselves, performing before an audience of parents in a 'theatre in the round set, with a custom-built lighting rig and PA utilising backing tapes. The cast of four will vary from school to school with Gordon and Lyn remaining mainstays of the production. Schools have fallen over themselves to book 'Prodigal Son* and Gordon remarks ruefully that "it will take until 1992 to fulfil all the bookings." What has been a pleasant surprise to the novice musical impresarios is the enthusiastic response to "The Prodigal Son' in schools with a non-Christian religious background. "We recently had a booking from a school where forty percent of the pupils come from a Moslim background. What has helped us immensely is that our project fits into the personal and social education slot in the school curriculum. Because we tackle social issues -- for instance the song "Ecstasy" is staged as a massive acid house rave - we aren't considered religious education, even though everybody recognises 'Prodigal Son' emanates from the Bible."

Birmingham-born Gordon Lee is no newcomer to the world of music. "In the sixties I sold my bike and bought a guitar, learnt the statutory three or four chords and started a band." Johnny And The Alpines were soon forgotten but Gordon soon showed he had sufficient talent to earn a living as a pro musician. But his was not to be a glittering road to the Big Time. Most of the paid work was on the 'Mecca Circuit' doing conversions of the hits. "By '74 I'd had enough. Musical integrity wasn't exactly strong on the Polly Band Circuit But then black-influenced music became big in Britain. I was really into that; I'd always been very sensitive to rhythms in music, and for a time I had a residency at a nightclub in Birmingham with a four-piece band playing that sort of music." Except for a forced-stop when he caught pneumonia, Gordon continued on the gruelling Midlands club circuit until one night in 1979 he could take no more. "I just told the band that was it; I couldn't cope with playing the 'Hokey Cokey' any more. I turned my back on music and sold all my gear."

Gordon Lee had met and married his wife Lyn back in the mid-seventies. In 1980 the couple were invited to attend a service at St Mary's, the Anglican Church in Withal. "We found ourselves welcomed into a very loving congregation of people sharing a lot of our own needs. Lyn and I had to come to terms with a lot of things in our own lives - the fact that we'd both been married before and all that We'd got no spiritual angle on life at all; we just went to church and began to experience the love and acceptance of other people."

Soon music began to re-emerge into the picture. "When the vicar's wife discovered I played the guitar she very quickly roped me in. I found it awful to be honest with you. Fisherfolk choruses didn't even stand up to what I'd previously been playing. I thought the 'Hokey Cokey' was bad but this...But I was receiving the ministry of God from the people there and it culminated in a real born-again experience in 1983. We were in a church in Solihull as part of the music group. I didn't want to go but Lyn had kept saying' Come on, people will be relying on you'. After worship we broke into small groups for prayer. The minister, whom I'd never met before, said he believed there was someone there in that room who was on the threshold of giving their life to the Lord. I thought 'Ah, I've seen all this before...don't look him in the eye.' But I couldn't resist God. I simply couldn't I changed instantly, from being a really rebellious, unwilling guy to someone who knew he'd been saved by the grace of God. I walked out two feet off the ground, I was so changed! It was a remarkable experience."

And it was an experience which had a significant musical effect on Gordon. He took leading parts (both Moses and Jesus) in both the original tour and the recording of the Roger Jones' musical 'From Pharaoh To Freedom'. It was through this that Gordon met up with David Anfield, whose Anfield Music company had grown since its inception in 1982, becoming a thriving Christian music recording company and distributor. Gordon was, by the late 80s, doing a lot of schools work, and recognising the huge potential for a culturally-relevant musical presentation targeted to schools, went to talk to David Anfield about a musical based on The Prodigal Son. Says David: "Quite apart from its concept and its aims, 'The Prodigal Son' musically recognises that there are millions of people who've grown up in the pop culture. If they were to set foot in the average church and listen to the music there's nothing they could relate to, even the modem choruses would be alien to them. 'The Prodigal Son' speaks in today's musical language - rock, funk, rap, all the sounds of today's music". It was the Christmas of 1990 that composer Gordon Lee, lyricist Lyn Lee and drama writer Rita Ashman sat down and 'blocked out" their musical. Comments Gordon: "It lacked any sense of inspiration, any centre so we prayed about it and we 'laid a fleece' and said to God 'Lord, you've got to give us a sign about what the centre of this really is'. About three months later we were actually sat in our new vicar's office one morning and he was sharing a reading from Luke 1 verse 17 which just happened to be the reading set for the day. His phone rang and he picked up his phone and I picked up his Bible. It was then really that the Lord hit me over the head with a scripture. In Luke 1 verse 17 Gabriel speaks to Zechariah about John The Baptist's ministry being one of reconciliation between fathers and children. It was there that inspiration came for 'The Prodigal Son'.

Lyn wrote all the lyrics for 'The Prodigal Son'. "Usually it was words first then music but on some of the songs I had no inspiration and I'd say to Dave 'It would help if I had the mood of the music. He would strum a bit and suddenly I'd say 'Ah, I've got it now' and the words would come."

Says Lyn: "If s a total change of direction for me. I've always written but not song words. I went to college two years ago to train for counselling. At first I thought I'd just be writing lyrics. But now going into schools with Gordon and performing is tremendous...the effect I see 'The Prodigal Son' having on parents and their kids makes all the work and sacrifice worthwhile."