Gregg Martinez: The Cajun soul singer speaks about his life 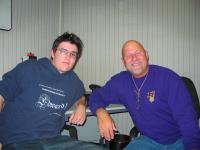 One of the least expected visitors to the UK last year was blue-eyed soul singer and Bible teacher Gregg Martinez. He came to the UK to do some engagements with Brit singer/songwriter Steve Parsons. As it turned out, Gregg has an amazing testimony. By 1986 he was on the brink of music biz stardom. But a lifestyle of wild living and violence took a dreadful toll before in 1989 he became a committed Christian. Now as director of Gregg Martinez Outreach he impacts lives and urges young people to make better choices than he did in his youth. I sat down with this tough looking, soul singing minister of the Gospel at the Cross Rhythms office. I asked him to run through his early life.

"I was raised a Roman Catholic and the part of the country I grew up in in America was the State of Louisiana and the south of Louisiana was a very unique place with a very unique culture. They call it the Cajun Culture today and it's a French culture basically, but it's very unique. It's unique to France as well. My parents spoke French before they spoke English and just like Italians or Mexicans, Cajun people are nearly all Catholic. Their communities are all like that. I started singing in church when I was eight years old. My dad was a farmer and I used to say that that's why I took up singing so that I could get off the farm and not have to work so hard!"

Gregg's gritty, bluesy vocal style meant that by the time he was 18 he was singing professionally. His winning ways with R&B took him from the bars and clubs of the bayou country to some of the most expensive casinos and hotels across the USA. He signed an exclusive performing contract with millionaires Donald and Ivana Trump and by 1986 Gregg was on the brink of stardom in the music industry. But then personal demons began to take hold. Endless nights of wild partying and reckless living took their toll. Gregg recounts, "I had had two divorces. I had a child from each marriage but I wasn't there when they were born, I wasn't together with their mothers when they were born. I had made a lot of bad choices and always paid a price. I was hooked on drugs and alcohol and had come to a point where I was despondent about everything, about the choices I had made and really thought that it was too late for me, and even when someone witnessed to me and told me about God, I thought that there was a line that you would cross and if you crossed that line, you went too far and you couldn't even go back to God - you were unredeemable. I thought that long ago I had crossed that line and that it was too late for me. But then, in 1989, I found out differently and surrendered my life to God and became a Christian."

Gregg was powerfully delivered of all his addictions, restored to his family and remarried his wife Janet. By the early '90s Gregg was singing in churches and beginning in 1991 with the 'Wonders Never Cease' album started to release his music independently. His latest album 'Bring Down The Thunder' features covers of mainstream hits from such as Randy Newman, Al Green and Otis Redding. It was recorded with Gregg's band Rolling Thunder and demonstrates that this veteran clearly possesses an amazing set of pipes. But alongside his love of music is his passion to communicate truth - particularly to today's youth. He explains, "I speak at public schools in America where I'm not even allowed to talk about God but the message is about choices and that there are two kinds of choices, right ones and wrong ones. You're free to make wrong ones but if you do, you have to pay the price for it. The price is greater than the fun. You can have fun doing some of these things. I don't lie to anybody that making wrong choices sometimes can be fun. It's basically called sin and sin is fun. If it weren't nobody would do it! But there is a price that you have to pay and the fun is not worth it. The consequences last longer than the fun. It always does. You got prisons full of guys all over the world that had 20 minutes of fun and now they have to serve time for it. But let me say that the only way to overcome those things in your life is through God. I've seen a whole lot of people who've gone to rehab for drugs and they do okay for awhile and then they fall off and until God gets a hold of them and gives you that deliverance, it's not permanent."

For the future Gregg would like to see him and his band challenging the secular/sacred divide. "I would rather do less churches and more festivals, secular music festivals where we're not billed as a Christian group but as a rhythm and blues band but then we get the Gospel in there. I have a CD that we did this year that's got my testimony and a few songs and I'd like to be able to give those away to people who come by the table to look at our stuff and let God do the rest. We did a date in June over in Texas and as a matter of fact there was a bartender there that bought the testimony CD and I didn't even know about it but I got an email a few days later and she said that that was all she'd been listening to for several days and had made a commitment to the Lord through that. So we present the Gospel in a unique way and a unique setting outside of the church walls and God does the rest."

Gregg, you may not remember me but I've had the pleasure of meeting you in AC in the mid 80's.. I have NEVER forgotten the impact your awesome Myers voice has had and still does have on me. Thank God you found your way. I still remember the cajun song along with ur beautiful rendition of I WANNA HOLD YOUR HAND. ( Beatles) and Billy Ocean's GET INTO MY CAR.Thank you,Gregg for the many memories I cherish from those days!!! You will ALWAYS be one of my all time faves! Thank you and God Bless!!!

I first heard you sing in the late 70's, your delivery was everything first class should be! Last weekend you sang the Star Spangled Banner at our Fr. Teurlings homecoming game, people were amazed, you do have a true gift from GOD. Thank You- Alfred Ducote- TCH- 68

Great Story Gregg, There can be happiness ( fun ) in this world when we walk with God. Thank him for letting us
come to a realization before it was too late.
I am working on promoting your c.d. Love the horn work on Today I started Loving her again. Brings back the old Boogie Kings sound.