Gwen McRae: The R&B star turns back to her gospel roots

R&B star and disco diva GWEN McCRAE found new direction in her life when she let the Lord in. Now she's recorded her first gospel album. She spoke to Tony Cummings. 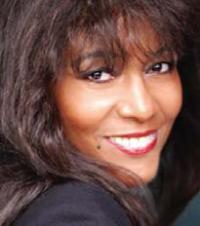 Gwen McCrae is a name that will make connoisseurs of soul music swoon. In 1975 she enjoyed an R&B million seller with a sassy piece of Miami soul, "Rockin' Chair", while rare groove buffs will cite "Funky Sensation" and Northern soul fans "All This Love That I'm Giving" as the epitomes of the soul diva's art. But now, with the release of Gwen's 'I'm Not Worried' album on Georgia-based LewMar Records, the Church too can discover a giant singing talent. Gwen in fact grew up surrounded by the sights and sounds of gospel music. She told journalist Jack Mottrom, "My mother played the piano in church, she had me there for prayer meetings, for Baptist Training Union meetings, all kinds of meetings - I was just a regular churchaholic!" But like many a singer brought up immersed in black church, it was more a musical than a spiritual education which Gwen underwent in her teenage years. When asked out by Florida R&B musician George McCrae it quickly led to romance and marriage.and that was to lead to her entrance into the showbiz mainstream.

Said Gwen, "I was just helping out this little group (the Jivin' Jets) in West Palm Beach in Florida. It started when I got married and my husband was in this little local group, and they said to him, 'Doesn't your wife sing? Will you ask her to sing with us?' I turned right around and said, 'I can't do that!' You see, I had to go to church that day and do a song with my gospel group and my voice went away from me. I couldn't get nothing out, so I said, 'Oh Jesus, please forgive me, I wasn't going to sing with that group,' and my voice came right back. Then it came to me that if you're married, you have to be obedient to your husband as well as to Jesus, so that's what I did. I helped out."

The Jivin' Jets didn't break out of local club obscurity. But the McCraes were spotted by R&B hitmaker Betty Wright who took the couple to legendary music entrepreneur Henry Stone whose TK Records were beginning to clock up the hits with the emergent "Miami sound." Gwen McCrae began recording as a solo and an impressive cover of Bobby Bland's gospel blues "Lead Me On", leased to Columbia, became a small R&B hit in 1970. The following year she recorded the first of a string of singles and albums for TK's Cat Records subsidiary and had an R&B hit with an Ed Townsend oldie "For Your Love". But it was husband George who was to gain an international best seller with his shuffling piece of disco pop "Rock You Baby". In 1975, Gwen too hit the big time when "Rockin' Chair" reached number one in the US R&B charts and crossed over to the US Top Ten. Tours, hundreds of gigs and a stream of singles and albums followed. George and Gwen recorded an album with each other, 'Together', in 1976. But behind the scenes things were far from happy and the marriage broke up, ironically, as the pair returned to recording. "It was hard," admitted Gwen. "Being married and in the same field, there's going to be a little jealousy. That record was Henry Stone's last ditch attempt to keep us together, but it couldn't work. I don't want to bring up bad, bad things, but I will say that I'm lucky the Lord was on my side at that time."

By 1981 Gwen was recording for Atlantic Records. But more importantly she found a vibrant Christian faith. Said Gwen, "When I was in the R&B scene, I gave my all, I gave my best, but it bothered me because that wasn't where I wanted to be. I had children to raise and I wanted to raise them. Some people just want to sing, they don't care about no children. All they want to do is make it. I wanted to get my children grown first and then worry about putting myself forward. And I've been a minister since I was 33. I thought to myself at that age, if Jesus could die for me on the cross at the age of 33, who am I that I can't give my life to him at the age of 33?"

Not for the first time in recent years the R&B/disco diva has found herself the toast of Britain's underground soul scene. In fact, in 1996 she cut an album for a British label, Homegrown. But it's the release of her debut gospel album 'I'm Not Worried' which fills this passionate, vibrant believer with joy. "It's just like day one," she commented. "R&B has the way of the world to it, but when you're born again, all you want to do is sing about the Lord, about Jesus. When you're singing gospel, you are praying and you are preaching. Doing that, my voice is much stronger, I look wonderful and I feel great."