When Hannah Atkins walked into the studio to appear on Cross Rhythms radio's Rimmerama - the programme I help Mike Rimmer put together - both of us felt honoured. Here was the singer dressed like she was about to be interviewed by Sir Alan Sugar - cutting a dash in an elegant business suit. She soon brought Rimmer and me down to earth though. She had just come from a meeting with her bank manager!

Manchester-based Hannah, with three independent albums under her smartly tailored belt, has built up a considerable critical reputation. One reviewer described her music as "reminiscent of an early Imogen Heap" while another spoke of her "piano-driven alternative soul and folktronica." If such valiant efforts to pigeonhole Hannah's haunting music weren't enough, the lady has now broadened further her range of styles by guesting, alongside such acts as tbc and Shell, on the high profile Pop Connection children's album. Her own latest album, 'Falling', was released independently last year - being named by Mike Rimmer as one of the best albums of 2008 - but is getting a full-scale media launch in May. She spoke about the collection of delicate, serene songs and her passion to see broken hearts mended. On making the album she said, "I went through a really tough time and wrote the album about my own heart being broken and put back together through some amazing spiritual experiences - feeling an awesome healing presence of God at really low times." Wondering how people struggle through the battles of life without spiritual healing she said, "I know people turn to different things which aren't always good for them, but I only found comfort and satisfaction in the spiritual realm." At one point her whole life was in ruins when her relationship broke down and her business was struggling and music was her healer. But how did she start to pick up the pieces when she was so low? "For me writing a song wasn't all of it. The stuff that really gets you through is speaking out truth over yourself - there's so much power in words! For me, I find loads of those encouraging words in Scripture."

Hannah continued, "For me, it's about curling up on my bed with a chill out CD or listening to some music or just be in silence and talking with my maker (praying!) - I honestly feel such a massive difference - a huge peace - and have seen loads of prayers answered!" Although she didn't want to go into detail about the struggles she had been through in her relationships that had led her to such a hard place, she says that if she was to go back in time she wouldn't change that bit, "just because I had such real spiritual experiences in that time. I've had loads of spiritual experiences before - but this was different and a far greater sense of love and peace." For a lot of people when life is at its worst they are angry with God and are driven away from him but for Hannah, this made her closer. "I'm so glad to have been through the hard times, even to be able to write these songs where people are going through really rubbish stuff and to be able to relate to it in some form. I pray that just as I felt that amazing sense of 'the presence of God' in the most painful of times, people who listen to the music will find healing in it too."

Hannah has been involved in the church and music ever since she was a child. Her family were sometimes sarcastically labelled the Von Trapps due to their prodigious musical talent. She grew up in rural Lincolnshire with two brothers who are today both involved in the music scene and parents who were immersed in their local church. She learned to play the piano, in interviews always recalling her teacher Mrs John. "Mrs John lived in our village and she was lovely. She was so eccentric, gave out great biscuits and got me hooked to The Beano! Her village-renowned question to her pupils was, 'Are you full of beans today?' She encouraged me, from the age of seven, to perform my piano pieces and sing along. I have a lot to be thankful for from Mrs John." Hannah also took violin lessons and became part of a few local orchestras as first violin. At 14, Hannah took up the piano again and taught herself to play chords. This was when she started to regularly write and perform her material at local community gatherings around Lincoln. 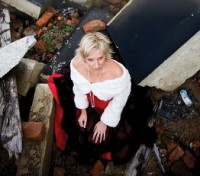 When Hannah was 16 one of her compositions, "Closer Still", was published by leading Christian music publisher Integrity Music and made it onto several albums. At 17, a further two songs were published and Hannah became a regular performer at the international Bible week Grapevine. At 18, Hannah had finished A levels and took a gap year, writing and recording a live album, 'Dreamer', in order to raise money for a trip to Peru to work in the shanty towns of Lima. In the poverty of the shanty towns, Hannah discovered that besides the commonly known phrases of "coke" and "Beckham", music broke down language barriers and the children were drawn to the tiny Casio keyboard she took with her. Hanna's Spanish improved whilst out there but her music always brought smiles to the children's faces.

On return to the UK, the singer/songwriter did a five month voluntary stint in Watford where, again, she combined her music with working in a homeless day centre. Her months in Peru fuelled Hannah's passion to link music and social justice work and she went on to study health and development in a human geography degree at Manchester University. She won a grant to complete her final year dissertation in Ethiopia where she studied the tragedy that HIV/AIDS has brought to that nation.

In 2004, Hannah recorded her second album, 'Hold Me'. Promoting and selling it herself, she shifted 1,000 copies and even more through downloads. Also in 2004 Hannah set up a not-for-profit music/arts and media company, MassiveUK, with three friends. Marrying excellent quality music with community action and creative workshops, MassiveUK consumed her time. Said the singer, "If you've ever started your own small business (especially non-profit), you'll know what I mean. We had some great experiences doing hundreds of high end hotel and bar gigs."

Hannah spoke about the potential effect that music can have on culture: "We believe that music changes the spiritual atmosphere in places. And as we play in bars, clubs, hotels, gig venues, churches and department stores, we have seen people emotionally affected by the music. There is a hunger for spirituality in our culture and music and the arts definitely have a part to play."

On Rimmerama Mike and I ran through the blog topics of the day which offer listeners the chance to email in and answer three questions to win five CDs. We put one of the questions to Hannah: If you could have three wishes what would they be? Without hesitation she replied, "One thing I am praying for is to be on Jools Holland. Anyone with any contacts let me know! Secondly, I often get asked to speak at events. One of the things I speak about is how people often have a dream about doing something but are afraid to do it. I would ask them, 'If money considerations didn't get in the way what would you do?' I would say, 'I think everyone was created with a destiny so you need to go for it.' Yes, there are a million excuses, there always are. I wish more people would take the step into who they're really meant to be." Clearly, singer, songwriter and social activist Hannah is following her own advice.

The opinions expressed in this article are not necessarily those held by Cross Rhythms. Any expressed views were accurate at the time of publishing but may or may not reflect the views of the individuals concerned at a later date.
About Gareth Duffield
Gareth Duffield is a journalist and assistant to Mike Rimmer and lives in Birmingham.