She's got a voice to die for, more musical accolades to her name than should be legal and a mind blowing new album. So who is HELEN BAYLOR? Pippa Rimmer finds out. 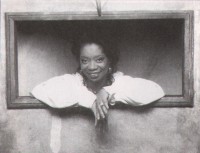 The amazing mother of four from Detroit has just released 'Love Brought Me Back', a heady mixture of R&B, gospel, soul, funk, urban and a bit of Motown thrown in! Helen Baylor is back with a vengeance. As anyone who has heard her heart-stopping testimony on 'The Live Experience' will know, Helen has lived through highs and lows of a life peppered with glamour, fame, wealth and deep tragedy. The new album, her first studio album in three years, is a testimony to the grace of God in her chequered life.

It seems that Helen was destined to make it big. At 12 years old she was a soloist and a backing singer for other artists. Soon she was appearing alongside some of the megastars of the time - Aretha Franklin, Chaka Khan, Captain And Tennille and Bill Cosby. And, to add another string to her bow, she appeared in the liberal musical 'Hair' in the late '60s.

This kinds of lifestyle soon lured Helen into its seedier side. She had a baby at 16, was sent to a home for unwed mothers, got into hard drugs and alcohol, began delivering drugs for her drug dealing live-in partner and was soon on the slippery slope downwards.

As a little girl, Helen had gone to church with her grandmother, who told her that God was going to use Helen. On 'Live Experience' she testifies, "I had a praying grandmother!" It was her grandmother's faithful prayers and Helen's desperate state that led her to call on God.

Helen recalls with painful honesty, "I was watching a Christian TV programme, smoking some weed and drinking some wine and making fun of the Christians. God by his Spirit began to deal with my heart and that night I called on the name of the Lord. That night I told God I was tired of living like this. I knew I was going to die if I didn't stop it. I was instantly delivered from everything, all at once, all by myself in my dingy apartment in North Hollywood." Even more miraculously, her boyfriend was saved too and they both married!

Helen has come a long way since those dark days. Her albums have always been powerfully charged and uplifting but what Detroit has just released 'Love makes 'Love Brought Me Back' so special? Brought Me Back', a heady mixture. She explains, "When Bill Maxwell, the producer, and I sat down to think about the album that would come off the 'Live Experience' album, which had done really well for me, we didn't think about a theme. We just wanted to make sure that every song was relevant and a part of my personality, what I stood for and believed in. We went for the songs that talk about the greatness of God, like 'There's No Denying'. We went for 'Love Brought Me Back' because it was such a great song by DJ Rogers back in the '70s."

Not only did Helen have Bill Maxwell as her producer but as her drummer as well. And it doesn't stop there. Abraham Laboriel dabbled on bass, Joe Sample (of The Crusaders) tinkled the ivories and Andrae Crouch and Billy Preston made an appearance! No wonder Helen was overcome!

"I could hardly sing!" Helen chuckles. "I was in the vocal booth looking at Andrae at the piano and it was hard to keep the tears back. Here's Andrae Crouch and Billy Preston and then Joe Sample in the same room playing for me. Some moments I was crying and then I was laughing and for some moments I was sitting in the corner just going, 'Wow'. It was great."

What else can we expect to hear on this new album? That old gospel classic, "Amazing Grace", gets the full-on Baylor treatment and a total facelift. And Billy Preston joined in with his Hammond organ and did the whole track in just one take!

Helen recalls it well: "He was gracious enough to come in and play and sing with me. Actually, it was an afterthought. He was hanging out in the studio with us after he had done his organ part. He was singing and humming so I asked Bill Maxwell if Bill could sing on 'Amazing Grace'. He went up there and sang one time and did it in one cut."

As if all this wasn't enough - God showed up! Helen takes up the story again: "It was really great to see how God got people together on this album who have been through some things in their lives. We had people singing background vocals who had once been on drugs; God had delivered and saved them and they were now on fire for God. Other people who had lost family members within the last year were broken; they came and played and got refreshed. It was an album of restoration."

As they continued to work away on in the studio, even more miraculous things happened. Helen's tale gathers speed. "It was amazing," she remembers with excitement. "One song in particular had me, Howard McCrary and his sister Linda singing background on 'There's No Denying. After it was over we listened to the playback and there were some voices singing at the very end that no one else had sung! These voices were very high soprano. I don't believe any human could have sung those notes. I asked the engineer to isolate the singing. Everybody's eyes were as big as plates! The vocals were way up in the rafters! We believe that angels came and visited us. And every time I hear that song and hear those voices at the end I can hardly stand it because the power of God was there with us."

Recently, Helen has been going "live" with the songs for the first time and she seems surprised at getting such a huge response wherever she goes. Her music has even crossed the abyss and touched teenagers. "Even a song like 'Making It Plain', which has a hip hop flavour, they love! I wanted to write a song that would get up in the face of our young people and let them know that Jesus is the real deal."

Helen has seen people stand up in wonder through a whole concert - from the ballads through to the hip hop. They've even congregated at the front of the stage, dancing like they were at a wild rock conceit, not a respectable gospel gig!

So, is there a typical Helen Baylor fan? "I don't think so," she chirps happily. "That amazes me as well! They go all the way from two or three years old up to an 85-year-old grandmother. There are no colour or age barriers."

More poignantly, during concerts fans have sometimes come to the front and fallen to their knees, without Helen even making an altar call. Such moves of God touch Helen deeply. "When I sing live, the people are responding in a very unique way," Helen says, almost in a whisper. As well as touching people's lives in a big way, the album's popularity is also reflected on the current Billboard charts in the States. And, as a further credit, Bill Maxwell, who is no stranger to recording top quality albums, told me that 'Love Brought Me Back' was the best album he has ever recorded!

For Helen Baylor, life at the moment is one big amazing dream come true. From the nightmare of her drug-filled beginnings, God has given her a ministry and a deeper revelation of himself. She's a woman who is going places, a singer with more than just a heart-stopping voice to offer.

'Love Brought Me Back' is guaranteed to arrest you in your tracks. It's more than just music. It's an album with a tangible anointing. Many of the songs are echoes of Helen's own life experiences, containing a vulnerability and an honesty that will strike a chord with many empathic listeners.

Helen has the final word: "We came together and prayed and believed God that we would pick all the songs that he wanted on the album that would let people know a little more about who Helen Baylor is. We have a really diverse album with a lot of different musical styles. I think it's my best work because it shows who Helen Baylor is. It's more of a picture of who I am as a person."

The opinions expressed in this article are not necessarily those held by Cross Rhythms. Any expressed views were accurate at the time of publishing but may or may not reflect the views of the individuals concerned at a later date.
About Pippa Rimmer
Pippa Rimmer is a regular contributor to Cross Rhythms and with her husband Mike presents a weekly magazine programme on UCB Cross Rhythms.