A great deal has happened to Hezekiah Walker since Cross Rhythms last reported on the Grammy Award-winning gospel artist and pastor at the beginning of 2007. In December 2008 the pastor from Brooklyn, New York, was consecrated into the bishopric of the Church Of Our Lord Jesus Christ Of The Apostolic Faith Inc while in 2011 he was enthroned as the Presiding Prelate of the Pentecostal Churches Of Jesus Christ. Such elevation into the higher echelons of the Church meant that for a season Walker's musical activities took a back seat but finally, after five years, the leader of his famed 200 membership mass aggregation the Love Fellowship Choir has returned to the CD racks with the album 'Azusa The Next Generation' and was instantly rewarded by seeing it make number one on the iTunes Christian & Gospel Chart. The album featured high profile guests such as Brian Courtney Wilson, Deitrick Haddon, John P Kee and Donnie McClurkin and was produced by Walker and hitmaker Donald Lawrence. Even before the album was released Walker was enjoying a hit single with a passionate worship chant "Every Praise".

Walker spoke to positivelygospel.com about the song. "It seems like every time I put something out people respond in a major way and this time around they did it again. It's a little difficult staying relevant. I believe if you keep your ear and your heart to the heartbeat of the Church, to the season of which the people of God are in, I think you will come up with some great songs that will stay relevant. When he (David Bratton) gave it to me it really spoke to my heart. A lot of times we take credit for a lot of things that God has done in our lives and I realise that without him I would not be. The Scripture says in him we live and move and have our being. So anything and everything that has happened for me I can't take credit it for it. Every door that has opened, God is behind that door. Everything that has happened to me God has been behind it and we have to give credit to him. We're living in a season now where it's all about me, but it's not about us, it's about God. So when I heard the song it was like, every praise belongs to our god, everything that comes our way. I took the song to remind everybody that it's not about us, every praise belongs to our God."

The album is named after Azusa Street, the famed Los Angeles road which in 1906 saw a Holy Spirit revival which marked the beginning of modern day Pentecostalism. Walker spoke about the Pentecostal movement. "A lot of times we focus on the fact that they were receiving the baptism of the Holy Spirit and that whole Pentecostal movement, but I believe that it was more than that. I believe that was one of the manifestations; the dancing and the music, the shouting and the all night prayer, the shut-ins. I believe that all that was part of it but one of the things that they were praying for and I think a lot of people miss is they were praying for change in racism. That was a big thing back there, because of the Jim Crow laws and everything. And this one man, this one black man (William Seymour) called that revival on Azusa Street. Everybody from all different denominations, all races came under that one roof to promote and pray for change. I chose Azusa for a lot of reasons, but one of the main reasons that I chose to name it 'Azusa The Next Generation' is because I really believe that gospel music in this season should be a breath of fresh air for the community. I believe that it should not only pierce the heart, but it should promote change."

The bishop's favourite song on the album is "More Than A Conqueror". Said Walker, "I love the song, the lyrics and the lead. Timiney (Figueroa Caton) is like the Gladys Knight of gospel to me. That whole song really encourages me and makes me to believe that I've come a long way, but there's some more that's getting ready to come my way and the Lord has made me a conqueror over it. I'm going to get it, I'm going to conquer it." 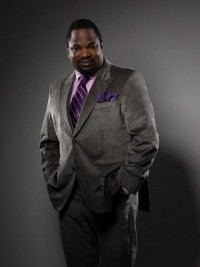 Another standout is "Break Every Chain" which features Deitrick Haddon. Said the gospel veteran, "When I first heard the song I heard it from Jesus Culture and I said, 'Wow that's a wonderful song.' Because I'm a choir man I wanted a choir to do it, give it that choir sound. Tasha called me because she heard I was going to do it. I told her to go ahead because I'm doing a remix. Tasha recorded it and did a great job with it, but I wanted to do it and put a different spin on it for a choir. Even though she's doing it, there's a different sound when a choir does it. I picked Deitrick Haddon because he's a choir man. He started out in the choir, that's his thing. So the song is a spin-off from Tasha Cobbs."

We are having a family reunion in the name of my mother and her sister who definatly are in Heaven. We would like to ask. If you and group would sing and you. Preach at this affair the date is August 30, 2015. If at all possible we would be honored to be In your presence. Please let me know. Rhonda Crouch-mills